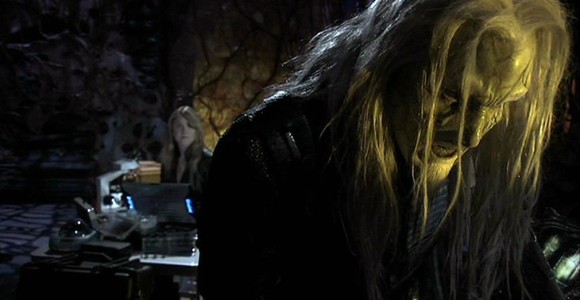 After Todd's hive ship shows up over Atlantis transmitting a distress call, the team discovers that he and his crew have been stricken with a disease they helped create.

A Wraith hive ship heads straight for Atlantis. Mr. Richard Woolsey wants to engage the city's cloak. Rodney McKay wants to raise the shield instead, as the Wraith seem to already know the precise location of Atlantis on the planet. Ronon Dex advocates destroying the ship immediately. Lt. Colonel John Sheppard sits in the Ancient control chair, poised to fire drones should the hive attack.

Woolsey orders McKay to cloak the city. When the vessel emerges from hyperspace, it transmits a file. Although corrupted, the video recording reveals that the Wraith Todd has tested Dr. Keller's gene therapy ("The Queen"), with disastrous results.

Taking a Puddle Jumper, Sheppard and his team attempt further communication from space (so as not to give away the city's location with a reply from the surface). Neither McKay's instruments nor Teyla's Wraith-sense detect any life signs on the hive. Landing in the Dart bay, the team encounters no one as they head for the bridge. Despite power fluctuations, McKay locates an uncorrupted version of Todd's message. From his time on the Daedalus ("The Lost Tribe") Todd was able to create Keller's gene therapy, which he tested on himself. To his amazement, it worked. His feeding hand is now devoid of a feeding slit – he doesn't have to feed on the life force of other beings to survive any more.

But Todd further reports in the recording that when he administered the treatment to his crew, some died, while the rest fell ill. The entire ship's compliment retreated to hibernation pods while they traveled to Atlantis to seek help.

Discussing the situation in Woolsey's office, both Sheppard and Ronon vote to destroy the Wraith ship and be done with the whole affair. But Woolsey and the I.O.A. want a follow-up study to learn why the treatment was only partially successful. So Sheppard's team, Major Lorne's team, a Marine unit and Dr. Keller return to the hive.

While Keller settles into Todd's lab, McKay heads to the bridge to stabilize the power fluctuations. The others establish a perimeter. In one of the corridors, Lt. Williams watches a wall dissolve. He alerts the others before he is viciously attacked by an unmasked Wraith soldier.

As Sheppard and Lorne search for Williams, they discover that the ship's schematics are no longer accurate. Walls are beginning to appear where they aren't supposed to be. Unable to explain the problem, McKay continues to work on the power fluctuations. Meanwhile, Teyla and Ronon find what is left of Williams. He is dead, and has been partially eaten – not fed upon, but actually consumed by the Wraith.

Everyone retreats to the lab where Keller has learned that the gene therapy activated the Wraith digestive systems, as it was designed to do, but also weakened their immune systems and created a virulent, cancer-like disease. When McKay realizes that the power issues are opening the creatures' stasis pods, Sheppard orders his people to leave.

They make their way back toward the Dart bay – but the ship's corridors have reconfigured again, preventing their exit. A chasm several stories deep blocks the only alternative route to the Jumper. Returning to the bridge, McKay discovers glitches in every system, including communications. He is unable to call Atlantis or halt the continual reconfiguring, and so McKay wants to wake the sick Todd – even though Keller has no cure for the disease.

Todd surmises that since hibernation involves an exchange of fluids between the Wraith and the ship, the disease has entered the hive's own systems. He estimates that four days remain before the hive is uninhabitable. While he and Keller work on curing the disease, Sheppard wants McKay to shut down the unopened pods to prevent randomly freed Wraith from threatening them. Even though this will suffocate them if their power fails, McKay complies. All but one section of pods is shut down.

This one group contains several dozen Wraith, so Sheppard sets off with C4, determined to blow it up, if necessary. But he finds that the reason these pods wouldn't shut down is that they are already open. With at least 22 hungry Wraith roaming the ship in search of food, Sheppard orders that they be hunted down.

The teams hunt and kill the Wraith as Keller summons Sheppard to the lab. Todd recalls an old story of iratus bugs restoring health to sick Wraith if a queen iratus bug feeds on him. Such a queen is on a planet three days away. Sheppard nixes the idea of taking Todd's ship there – the hive can barely maintain its integrity. There is no way it would survive a journey in hyperspace. Todd believes that Sheppard owes him this – but Sheppard disagrees. After Todd reacts violently (instinctively motioning to feed on Sheppard) he is taken away.

McKay calls Sheppard back to the bridge. The chasm is growing, threatening hull integrity. In addition, a structural weakness has developed which spans the width of the hive. If it fails, explosive decompression will split the ship in two. The teams fight their way back to the bridge, but are trapped behind a malfunctioning door. Sheppard is on the other side, trying to open the door. Ronon and Lorne work from their side, opening the door just before the ship breaks apart over the planet.

A trajectory shift results, sending the front half of the ship (where the team is now located) falling through the atmosphere where it will vaporize upon impact. When Todd refuses to help, Sheppard promises to send him the planet with the iratus queen bug. Teyla is attempting (unsuccessfully) to fly the ship when Todd takes control. Summoning himself, Todd exerts his will to level the ship out. It hits the water, but remains intact. Everyone is rescued by Atlantis moments before the ship sinks.

Back in the city, Sheppard asks Woolsey to honor the promise he made to Todd, especially since Todd is not responding to any treatment. Woolsey notes that it is a decision which could cost him his job, but consents.

John escorts the Wraith he might have once called an ally to the Stargate. Though he is somewhat surprised that Sheppard is holding to his word, Todd thanks Sheppard and steps through the Stargate – in search of his one long-shot at survival.