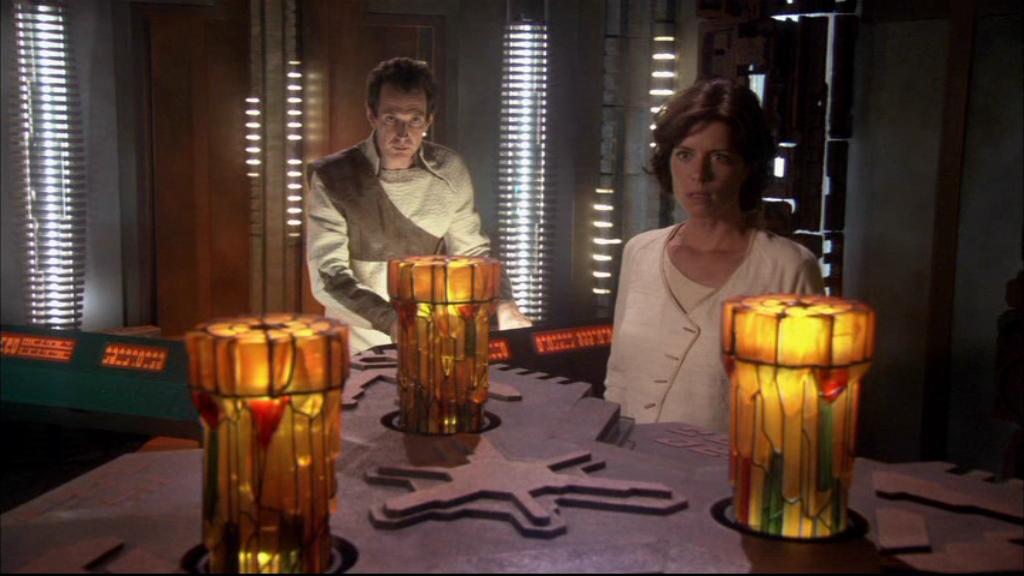 Ancient power source, cylindrical in shape and containing energy compatible with Ancient technology -- including the Stargates. A Z.P.M. derives its enormous power from vacuum energy, derived from a self-contained region of subspace time, and has a potential life of many millions of years.

Some Ancient technology requires Z.P.M.s, and the city of Atlantis relies on three of the units in order to run at full power. A Zero Point Module or equivalent power source is required for a Stargate to establish a wormhole to a gate in another galaxy. It is possible to construct a version of the device from Earth-based materials, as Jack O'Neill (under the influence of the Ancients' library of knowledge) once did to reach the Asgard when he needed their aid.

SG-1 first discovered the technology when O'Neill, again under the influence of the Ancients' knowledge, led them to the planet Proclarush to retrieve a Z.P.M. from Taonas, the Ancients' abandoned base there. They brought it back to Earth and found the Atlantus outpost in Antarctica, where the device powered the Ancient drone weapons that destroyed Anubis's attacking fleet. The module was later used to power the Stargate for the Atlantis expedition's long-distance journey to the Pegasus Galaxy.

Upon the Earth team's arrival in Atlantis two of the city's three Z.P.M.s had been depleted, and the third was reaching maximum entropy trying to stave off the ocean around the submerged city with a shield barrier. It is the Atlantis team's hope that additional Z.P.M.s can be discovered in the Pegasus Galaxy, both to power the city's defense shield and to provide enough power to gate home to Earth.

Lost City, Part 2 - SG-1 retrieves an Ancient power cell from Proclarush Taonas to take back to Earth, where it is instrumental in destroying Anubis's fleet.
Rising, Part 1 - Earth's only Zero Point Module, taken from Proclarush, is used to power the gate for a trip to Atlantis in the Pegasus Galaxy. The team discovers that Atlantis' own Z.P.M.s are failing.
Rising, Part 2 - Atlantis' last working Z.P.M. is depleted, and the city rises to the surface before the shield fails completely.
Childhood's End - McKay takes a Z.P.M. -- used to power a village's protective electromagnetic shield -- back to Atlantis for study, but Weir orders him to return it.
Before I Sleep - Waking up in Atlantis 10,000 years ago, Elizabeth Weir enters a long stasis sleep -- awakening every few millennia to rotate the Z.P.M.s to optimize the city's chance of survival.
Moebius, Part 1 - When SG-1 finds evidence of a Z.P.M. in ancient Egypt they use the time-traveling Puddle Jumper to go back 5,000 years and steal it from Ra.
Moebius, Part 2 - After an alternate-timeline team manages to restore the broken timeline Stargate Command ends up in possession of Ra's Z.P.M., intended to be sent to Atlantis.
The Siege, Part 3 - The Daedalus delivers a much-needed Z.P.M. to Atlantis, to help defend the city from a Wraith assault.
Zero Hour - The Goa'uld Camulus leads Stargate Command to a Z.P.M., which they discover has been tainted so that it will cause a catastrophic explosion if used.
Ripple Effect - Reporting their Z.P.M. is depleted, an alternate SG-1 punctures a hole in the metaverse to steal a powered one from another reality.
The Tower - McKay powers the star drive of an Ancient city ship to drain the power of the Z.P.M. running it, effectively ending the rule of the dubious Lord Protector.
Adrift - The city's Z.P.M. runs desperately low with Atlantis adrift in deep space.
Lifeline - Sheppard's team covertly steals a Z.P.M. from the Replicator home planet.
Spoils of War - Todd the Wraith reveals that he sent warriors to steal Z.P.M.s from Asuras before the planet was destroyed.
Enemy At the Gate - Todd reveals that he has had a scientist working on interfacing a Z.P.M. with a Wraith hive ship, and he has been successful -- using it to engineer a nearly unstoppable super-hive.