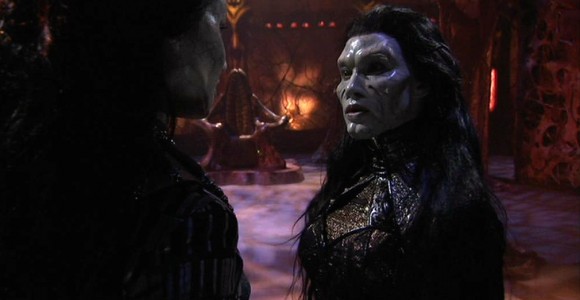 Teyla goes in disguise as a Wraith queen when Todd agrees to make a bold proposal to the leader of his alliance – not realizing that he has other intentions.

Aboard a Puddle Jumper, Lt. Colonel John Sheppard and his team – Rodney McKay, Ronon Dex, Teyla Emmagan – await the arrival of a Wraith hive ship. Also on board is a nervous Dr. Jennifer Keller, Chief Medical Officer of Atlantis and the reason they are there. Once the hive arrives, they dock and go aboard. After an almost ritual display of personal armament, their tenuous Wraith ally Todd greets them. He leads them to a "human" style conference room complete with long table and fruit bowls.

The Wraith hybrid Michael has recently found a way to eliminate his biological need to feed on humans ("The Kindred, Part 1"), and now Keller has culled enough information from his research ("Search and Rescue," "Whispers") to give the treatment to other Wraith. If the trials are successful, feeding on humans would no longer required for nourishment. She isn't sure if the other "benefits" of being a Wraith – strength, recuperative powers, and longevity – will persist. But she needs live subjects to test the gene therapy.

Todd and his second in command (whom Sheppard names "Kenny") see no advantage to accepting Keller's therapy – certainly a risky undertaking for them. Teyla points out that they would no longer have to hope that when they feed, the human victim hasn't been infected with the Hoffan drug ("The Kindred, Part 1") which is fatal to Wraith. Being able to feed safely would convey an advantage over other hives which risk death every time they feed.

While Todd considers, Sheppard worries that something else is happening – that Todd is somehow playing them. Todd returns with a plan to bring this idea before the queen of his alliance – a hive queen called the Primary. The problem is that only another queen dare make such a suggestion ... and he no longer has a queen aboard his own ship. He wants Teyla, with her Wraith DNA ("The Gift"), to be physically altered to take on this role. Keen to save human lives, Teyla agrees.

Once Keller has surgically transformed her, the Wraith-ified Teyla returns to Todd's hive for instruction on queenly demeanor before her meeting with the Primary. As Todd and Teyla board the Primary's hive, Sheppard and his team wait anxiously on Todd's vessel. But unexpectedly, the Primary's ship enters hyperspace and leaves.

Though concerned over this development, Teyla holds her own as she meets the Primary face-to-face. Before they can discuss anything, however, Todd kills the Primary and puts the knife in Teyla's hand. He assures her that this is the way power is attained and held among the Wraith. No hive wants to be without the leadership and prestige of a queen. If she can project strength, she will convince the crew to accept her. If Keller's proposal is to have any chance, this is how it must be done.

When the Wraith loyal to the Primary arrive and find their queen dead, they are furious – and the Wraith officer who leads them is intensely suspicious. But Teyla puts on a good performance, and they agree to follow her orders.

Todd's transmitter is activated when the ship exits hyperspace, giving Sheppard and his team their chance to catch up with them. Meanwhile, on the Primary's hive ship, they learn that another hive is encroaching on feeding grounds belonging to the Primary and her alliance. Reluctant at first, but knowing this breech cannot go unchallenged, Teyla orders her hive into battle. When it's obvious that her ship is out-gunned, she deploys the Darts. With the death toll mounting, Todd believes that Teyla is using the situation as an excuse to kill Wraith, but he also understands the need for a show of strength.

Arriving at the last location of the Primary's hive ship only to find them gone, Kenny realizes where they may be. Using the Jumper, Sheppard gates to the culling planet where they reach the battle more quickly. McKay points out that Teyla's hive is losing, so Sheppard takes matters into his own hands to turn the tide of battle. Flying under the enemy hive, Sheppard fires drones, re-cloaks, and escapes as the hive blows up. When the Primary's Darts are recalled, the cloaked Jumper boards Teyla's hive.

Sheppard, McKay and Ronon search for Teyla, but they are quickly captured. She finds them in a holding cell. Unbeknownst to her, the ship's commander is watching and listening. When she returns to the queen's quarters, he confronts her and tries to kill her, but Todd saves her life. While she is eager to implement Keller's proposed gene therapy and leave, Todd feels that more time must pass before such a radical agenda can be successfully put forth.

Teyla has no choice but to accept this. Todd has Sheppard and the team transferred back to his ship. As she prepares to return to Todd's hive, she tells the Primary's crew that Todd will speak for her now – leaving him in control of the Wraith alliance. Privately, she lets Todd know that if he steps out of line and fails to implement the gene therapy trials, she will come back and dispose of him. Todd has seen that this is no empty threat.

Back in Atlantis, Teyla undergoes a second surgery to restore her. In the two weeks she spends in the infirmary recovering, Todd consolidates his power within the alliance. Sheppard wonders if this was his plan all along. Teyla feels that they are still better off, since at least they know Todd. When Sheppard is gone, she flexes the hand she would feed with if she were the Wraith queen, thinking that Todd's day of reckoning may be nearer than he knows.