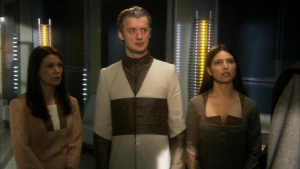 Thousands of years ago, the Ancients (the builders of the Stargates, and Atlantis) went to war with the Wraith. The Wraith were technologically simple by comparison (though they were space-faring), but thanks to a massive cloning facility (“Spoils of War”) they eventually overwhelmed the Ancients with their numbers. The final siege of Atlantis forced the Ancients to submerge the city and flee through the Stargate to Earth, where some lived out the rest of their days — and others ascended to a higher plane of existence.

But the Ancients left behind their most deadly weapon from the war. They developed microscopic nanite weapons programmed to attack the Wraith on the cellular level. But these nanites evolved into beings in their own right, taking the form of their creators and achieving sentience (“Progeny”). The Replicators were born. The Ancients saw them as an experiment run amok and tried to obliterate them, but the Replicators survived.

They lived on their own world in peace for thousands of years, long after their creators had gone. Their base code had been altered so that they were no longer driven to attack the Wraith, and so they kept to themselves, creating great cities. A small group of Replicators even bucked the views of their leadership and sought to follow their creators in ascension; but they always lacked that ineffable human quality that seems to make it possible.

When Atlantis made contact with the Replicators — first coming to know them only as the Ancient-like Asurans, unaware of their true nature — conflict soon broke out. Oberoth, leader of the Replicators, was bent on the destruction of Atlantis, as it was the last outpost of their creators who had turned against them. Sheppard’s team thwarted the attack, and later that year Earth launched a devastating preemptive first-strike against Asuras when intelligence suggested the Replicators were building warships (“First Strike”). War had been declared.

After suffering great losses, the Atlantis team infiltrated the Replicator homeworld and reprogrammed their base code — reactivating their prime directive. Now the Replicators left Atlantis alone and turned their full attention to a war with the Wraith. All was well and good … until they decided that the best way to defeat the Wraith was to destroy the human civilizations they preyed upon for food. Atlantis was forced to join forces with the Wraith against a greater enemy.

The alliance eventually led to a massive battle over the Replicator homeworld. Using Fran (“Friendly Replicator Anroid”), a “good Replicator” created by Dr. McKay (using the Ancient technology originally used to create the enemy), the Replicator planet and every Replicator on or in orbit of it was destroyed.

But unbeknownst to the team, there are survivors. A single ship appeared in the planet’s rubble, under the command of some version — perhaps a Replicator copy — of Elizabeth Weir. These may be the rebels who opposed Oberoth and wanted to learn how to ascend. Weir expressed satisfaction at the destruction of the Wraith, saying, “We can finally get to work without having to look over our shoulders. It’s time to begin.”