In December we wrapped up 2009’s GateWorld Podcasts with “PX-75309,” a Stargate parody song from the band Sci-Fried (set to the tune of Tommy Tutone’s “Jenny (867-5309).”  The guys did a great job with the song, which I found myself singing under my breath weeks later.

Yep, this one gets stuck in your fron.

Now the band has gone the extra mile and released a full-length Stargate music video for the song!  Props for the great work and high production values.  So without further ado …

Check ’em out on the Web at Sci-FriedBand.com for more. And if you happen to be in the Orlando area on March 13, head over to the free concert at the Rosen Plaza Hotel.

There seems to be some confusion between the time-line of the Destiny and the Ancients. The Destiny and its Stargate is said to pre-date Atlantis and the Milky Way Stargates.  Rush says that the Destiny was launched hundred of thousands of years ago but that contradicts the fact that Atlantis is millions of years old.  Did the writers essentially screw up with the numbers? (Tanith)

You’re exactly right that there is confusion.  When the team first arrived on Destiny, Dr. Rush said that the ship is “hundreds of thousands of years old.” OK, so the guy just got there five minutes ago and needs to brush up on his Ancient history.  (He might start with our Timeline …) We can let it slide.  But the ship’s relatively young age is stated again two or three more times in the early part of the season, after the crew has settled in, and by other people (Volker says it’s somewhere around a million years old).

I started coming to GateWorld when Ben Browder and Claudia Black joined the cast.  I’ve found it to be a place of supreme negativity.  It’s gotten even worse with SGU. Was it always like this?  Was it more fun in the beginning? (MediaSavant)

Ah, the good ol’  days.  GateWorld launched in 1999, during Season Three of SG-1.  It was awesome.  There were differences of opinion and groups who preferred different characters, sure.  But the greatest source of conflict was whether Sam and Jack should be more than friends.

Fandom has become increasingly large, diverse, and … shall we say “excitable” in the years since.  There are more people, and with three series (or four, if you count the last two years of SG-1 as practically a different show) there is a lot more to disagree about.  It’s certainly not just GateWorld — though other sites with forums may appear more peaceful if they cater to only one group.  I think we’re still one of the few sites that tries to be a place for everyone, and as a result, more skirmishes break out.

I think it’s natural for any fandom, especially when there are multiple series in play and one is replacing another on the airwaves.  Trek was a pretty happy place to be until the mid-1990s.  Diversity makes for allegiances, and allegiances breed conflict.  The longer a show or franchise goes (and evolves), the more cause people will have to complain about how the new stuff doesn’t have the magic of the old stuff.

But there are still plenty of happy people in Stargate fandom, and if you can get past the disrespectful people it is still a fun place to be.

Do you guys have any plans on covering the various Stargate video game mods out there that exist?  Are you guys even aware of this? Many of these mods are of excellent quality and worth checking out for any Stargate fan who is sick of waiting for a decent Stargate video game to come out. (Jonathan “Browncoat1984”)

I decided a few years ago not to do news coverage of the unofficial Stargate video game mods, though of course people talk about them plenty at the Forum.  My reason is that they are not only “unofficial” (meaning unlicensed by the studio), but potentially illegal in their use of copyrighted material.  Sure, you might say, as an unofficial Web site GateWorld and other sites like it are no different.  But the world of game mods is not one with which I’m familiar, so I wouldn’t play-test the games myself to determine their quality level, scan for viruses, etc.  I’m just not educated enough to know when a game mod is Awesome, or when it’s better left alone.

Finally, a proud Stargate daddy named Scott sent along this picture of his son, Devon — the next Stargate superfan! 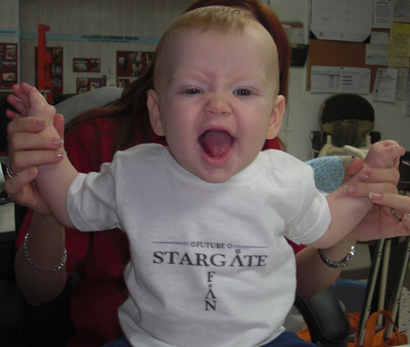 That’s it for this week. Ask your question now, or send us pictures of your cute fanboys and fangirls, and we’ll do it again next Friday!

For Cryin’ Out Loud: ‘Space’ Delivers→

For Cryin’ Out Loud: You’ve Had Your Say→

For Cryin’ Out Loud: The SGU Trailer→

Not sure if this is the best place to ask, but have Kurt Russell or James Spader (from the original Stargate feature film) ever commented on any of the various Stargate tv shows? Are they even aware of them? I know that the co-creator (Dean Devlin?) of the Stargate movie thinks the the tv shows don’t really follow the concepts/ideas set up in the film (the Stargate only goes to one other planet, for example) but I’m wondering if the stars of the movie have ever commented on what has happened with the franchise since the original film.

Hahahhahahhahah that video is pretty funny.
I especially liked the part where the jaffa had to look up the meaning of the word kree in the dictionary. Classic.

Kurt Russel (supposedly dressed like Elvis) visited the set of SG1 while they were filming an episode (I forget which one, put Peter Deluise mentions this on one of his commentaries). I don’t know if any of the actors have actually publicly commented on the TV series, however.

Cheers for answering my question, love the vid lol

I remember the oldie that PX-75309 references, but I still love it. The video is a hoot. The band Sci-Fried should get some bookings at conferences.

I checked out Sci-Fried’s website. They do perform at cons. I watched “TNG’ a song and video about a slammin’ Star Trek marathon party and “Too many Zombies”. I’m definitely a fan now.

Oh, dear… that song. Not quite sure I like it, though it’s done in good fun.

Being one that “recently” found GateWorld, I must say I like this place a lot. Basically because it is well kept, well written (I so hate bad spelling, but can accept the odd typo on a good day and I haven’t found many of those here) and people seem very nice (owners and most posters). I never go to the forum, though – but only because it seems to complicated to surf there and find stuff. I tiny improvement I’d like is that every episode should have a review (could do something about that myself) if Gateworld should be the… Read more »

Loved the video. The “comic relief” is within the usual Stargate SG-1 one liners. Very funny. The videos at the Conventions are always very skillfully made. Truly talented fans. It would be nice if Sci-Fried would be asked to attend and perform at a Stargate Convention. A nice addition to activities. Maybe at the Friday night Cabaret?

The Baby Stargate picture just indicates that fans span generations in a family. Stargate may outdo the longevity of Star Trek.

Great video and parody of the song. Tommy Tutone would be proud.

Great video, very funny. The band must be true SG fans to put in that kind of effort and get such a fantastic result. I also hope they get gigs at conventions. Also, is it just me or is the general tone of this site’s posters becoming more and more positive? I certainly hope so. I’m also looking forward to the rest of SGU Season 1. If the rest of the episodes are anything like “Justice”, SGU will finally be coming into its own. Question: Do “The Powers That Be” pay any attention to the comments or suggestions posted here… Read more »

Is David’s aversion to doing a Stargate vs Babylon 5 comparison due to him not having the DVDs? I’d be willing to loan mine out to him to have the conversation.

I think he’d come to realize how JJ’s Lost isn’t the first Sci-Fi show to know the whole story arc from the beginning. It was also one fo the first shows to show strong women, and show the characters in more than stereotypical arctypes. Showing their strengths and weaknesses.