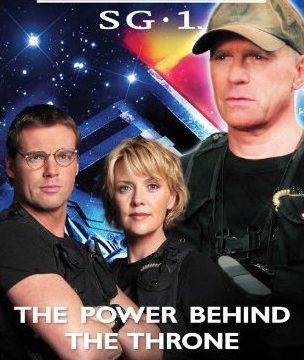 SG-1 must rescue an enigmatic, one-of-a-kind creature before Apophis can capture it for his own ends. The Power Behind the Throne by Steven Savile, $7.95 / £6.99.

Steven Savile is an award-winning author, and after reading his Stargate SG-1 novel, “The Power Behind The Throne” indeed, I’ll admit that he’s a good writer. He has attention to detail when describing a scene as well as a good imagination.

However, I found the novel to be more of a fantasy story rather than science fiction. And while Savile created some interesting original characters, that’s unfortunately of what the book primarily consisted. Far too many pages go by with little to no mention of SG-1. Also the situation on Kushmara was filled with far more darkness and cruelty than anything I expected to find in a Stargate novel.

Then there’s the Mujina. An interesting creature except its abilities seemed far too fantastical to fit in with science fiction. For instance, it tells one of the characters:

“I am an army. I am death, eater of worlds. I am hope, breaker of dreams. I am everything, from the beginning, the alpha, the zero point, rushing through time to the end of days. I am it and it is I. How can I bring you the stars? Because I am made of stars. Their dust hardens my veins. I do not bleed, I crack and flake. I do not weep, I calcify …”

While forensic anthropologists can certainly extrapolate an extensive amount of information from long-dead bones, I found it difficult to believe that the Mujina could sense or read a lifetime of memories from deceased human remains. And considering that the Ancients left our galaxy millions of years ago, just how old was the Mujina supposed to be?

Another question I am left with is why SG-1 was worried about keeping the creature away from Apophis when Teal’c clearly stated in the book that Apophis was already dead? And just which Goa’uld sent his First Prime after the creature in chapter one?

Also, how did the Goa’uld Iblis come to be trapped on Kushmara in the first place? And how did he come to have an Islamic name when all the Goa’uld left Earth in the time of Ancient Egypt — somewhere around 3,000 B.C. — and Islam and the Qur’an weren’t around until after  600 A.D.?

I never did fully understand the reasons for why the Stargate seemed to keep malfunctioning. I kept waiting for Sam to go into techno-babble mode and explain everything, but she never did.

Also, the whole story hinges on the idea that SG-1 can’t dial home because they don’t know the planet’s symbol for the point of origin. My understanding of the D.H.D. from the television series is that it has 38 symbols plus the point of origin of whatever planet it’s located on. The team never had to search for a point of origin on other planets, such as P3R-272 (Season Two’s “The Fifth Race”).

There were a few other holes in the storyline that could be pointed out, but not without totally spoiling the book for those who haven’t read it.  I will add simply that the ending was rather unsatisfying. It definitely needed a few more pages, particularly from SG-1’s perspectives.

“The Power Behind The Throne” was not what I expected. While aspects of the book are good, overall it doesn’t meet the standards set up in previous Stargate SG-1 and Atlantis novels. But then, one person’s literary trash is another person’s literary treasure — just as SG-1 discovered that “one man’s hero is another man’s villain.”

I can’t speak to the accuracy of this review since I haven’t read the book, but I did want to comment on some of the “plot holes” Donna mentioned. It’s funny how similar these oversights are to the plot holes we see on the show. It may be true that the name Iblis comes from the wrong time period, but so do a lot of Goa’uld names. Zipacna, for example, is a Mayan demon, but the Mayan civilization is only a few hundred years old. It’s also true that SG-1 never had to deal with locating the 7th symbol, but… Read more »

@archetype, point of origin can be a standard glyph? any examples? How did SG-1 figure it out then? Do you think for new planets the malp goes to the dhd and searches for the unique symbol or whatever before SG-1 goes there. But then if they could be standard looking then that would be truely difficult, because then DJ would have to dial 38 times. Never heard of the extra symbol the stargate has, maybe it was there to have more addresses in the future.

I agree with the review. The ending was unsatisfying. This would have to be my least favourite SG-1 novel.

I believe what they did *later* in the series to make up for the weird symbol discrepancies is make the center engage button automatically dial whatever the point of origin is. This, however, causes some discrepancies: * The Abydos glyph is used in one gate address on the series even though it shouldn’t be possible to be part of an address. * A Point of Origin glyph should not appear on other Stargates such as those planets with standard glyphs as P.O.O.s (production laziness to blame here) * The entire premise of SGU doesn’t work, because the Earth glyph shouldn’t… Read more »

@Duneknight
Who dials which symbol isn’t something I normally notice when I watch the show. But there are some people out there who meticulously catalogue this stuff. For example, this person:
http://www.rdanderson.com/stargate/glyphs/glyphs.htm
Scroll down to the bottom for a list of known Points or Origin. (…or point of origins?) You can even count the symbols on the handy DHD button diagram.

I too agree with the review. I was very disappointed with the ending. The story was too violent for me, although I did read it to the end I will not re-read this story like I have with some of the other books I have.

I agree with everyone here too. This was hands down the worst book I have read in regards to Stargate. I was a little nervous of getting it but since it was Stargate, I did. I wish I had not. I don’t see re-reading the book and do not recommend it to anyone. The ending was horrible on top of everything and very unsatisfying.

I agree the book was awful. I will not be re-reading or recommending it. Also in regards to the DHD discussion going on here: I don’t think it’s so much of a question of how the DHD works as it is that the show NEVER had the team stuck on a planet because they couldn’t find a point of origin. A broken or missing control crystal, lack of power, lack of a DHD itself, etc. But never because of the point of origin. Otherwise how did Sam know what coordinates to dial in the episode ‘Solitudes’, as well as ‘The… Read more »

I read this one. its a dark story that doesn’t have much of a plot-I wouldn’t recomend it.