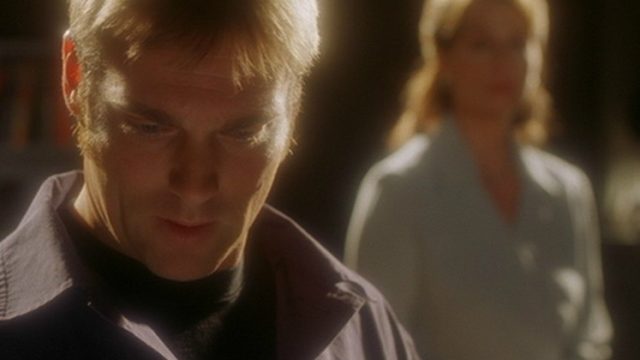 Rewatch “Meridian” this week! Then post your comments below, or head over to the “Meridian” discussion thread and see what people were saying back in the day. What are your favorite moments?

Yes, let’s celebrating all the characters in Stargate and Jonas has an interesting story arc. However, Meridian is for me and many SG1 fans the saddest episode in the whole franchise since Daniel dies–a terrible death–and ascends. It was not the best way to introduce a new interesting character to the show and not the best way to celebrate him here. Please, be mindful to the fact that Daniel Jackson was a central character in the movie and the show and much beloved by fans.

I loved the addition of Jonas to the show. I thought he added a needed refreshing change.

I always felt bad that we didn’t see more of Jonas after he returned home. Especially when SGU did an episode on Langara and Jonas wasn’t even mentioned.

Solstice0612 – I don’t see any disrespect to Daniel here, which seems to be what your post implies. And he was not “much beloved” by me. He was just a member of the team to me, and I liked others far better. :)

I love this episode and I love Jonas. This was really the time that I joined the series full-time since it would no longer be on Showtime (which never knew until a few years later). I had been catching it in syndication land prior. This is not disrespectful to Daniel or his fans. This marks Jona’s debut and love it or hate it, Jonas debuted here. I actually LOVE that Jonas’ actions caused such an impact. That meant the character had a good arc set for him. He’s actually my favorite along with Mitchell since they both were new to… Read more »