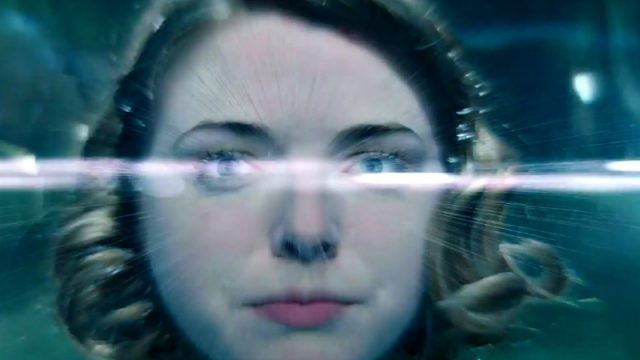 Long-time fans of 1994’s Stargate and the three television series have already recognized that the new digital Web series Stargate Origins is making some deliberate choices to follow the look and feel of the movie. From the design of the Stargate prop to its sound effects, from Catherine Langford to the planet she’ll visit, the fingerprints of the film are all over it.

The echoes are both visual and thematic. Both Daniel and Catherine enter the Stargate traveling to the planet Abydos, both the last person following behind a group. And both scenes start with a wide shot of their protagonist surrounded by the shimmering pool that is the Stargate’s event horizon:

Next, both figures reach out their hands. In Daniel’s case we see him gently touching the surface with his fingertips. But Catherine reaches her right hand all the way into the water-like wormhole before pulling it back:

Now a straight-on close-up of our hero, as if the audience is in the place of the puddle looking back at them. A look that is both thrilled and unsettled passes across their faces:

Daniel and Catherine both close their eyes (understandably) before plunging their faces into what looks to them like a vertical pool of water. The effect is created by placing a camera sideways under water and filming the actor moving his or her face downward into the pool.

Also observe how the Origins director has flipped the shot to film the actress from the left. (It matches other shots in the Web series where characters approach the gate from screen right.)

The audience holds its breath. After a beat the actors open their eyes, and the visual effects department takes over. Their faces dissolve in a series of streaks, until the face is gone and the familiar sequence of disorienting gate travel follows:

One difference when they come out the other side? Neither Daniel Jackson nor just about any other Stargate character (that we can remember) has ever commented on what they saw in transit. In Episode 4 of Stargate Origins, Catherine does so — indicating for the first time that what the audience sees here is in fact the same thing that the demolecularized gate traveler experiences in the nanoseconds that it actually takes them to traverse the wormhole.

Episode 4 of Stargate Origins arrives this Thursday at Stargate Command. Watch the first three installments for free, and subscribe to All-Access to get the entire Web series.

Keep up with GateWorld’s full coverage in the SGO episode guide and on the Origins news page!