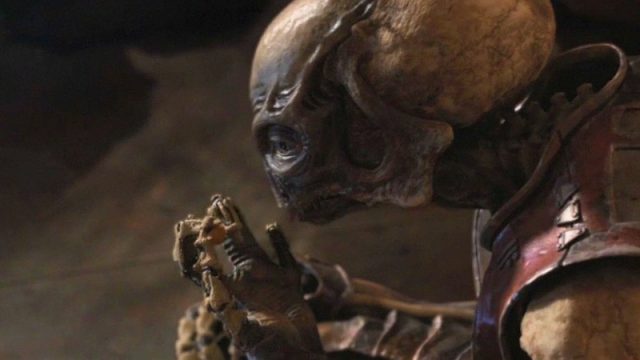 Sara’s first time through Stargate Universe is charging into the show’s 20-episode second season — and things are about to get interesting. This week the crew of Destiny discovers an Ancient seed ship, and comes face-to-face with some very alien aliens in the Ursini.

Remember your first time? Let’s watch along with Sara …

At the end of “Aftermath” Nicholas Rush said: “This ship is called Destiny for a reason.” I expected that line to play a much bigger role in the opening of this episode when the Destiny docked with the mysterious second Ancient ship. I should know better by now, that SGU isn’t that simple a show. They plant seeds and then let them sprout on the windowsill before adding them to the garden. 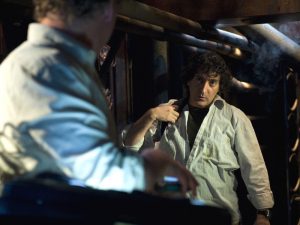 Brody and Volker — you’re up.

We still don’t know the reason for Destiny‘s moniker when we happen upon a second Ancient ship and dock with it.

Colonel Young grounds Rush, not letting him explore the second ship, instead sending Brody and Volker and the away team. It was a little like a mean-spirited version of Jack not letting Daniel go to Atlantis.

While the away team explores the second ship Rush goes off in solitude to pout, and Chloe shows up to remind us about her magically healed wound.

The reveal of the room-o-gates with the Stargate trumpets playing in the background gave me chills.

The new aliens look like emaciated Ninja Turtles. Though, it’s nice to see an alien species that isn’t hostile and isn’t scared. It just seems … kinda chill. It’s just gonna sit in the corner and watch while the humans do their thing. 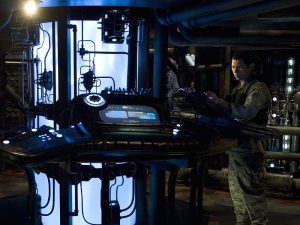 Telford (Lou Diamond Phillips) is going to have to get used to his home.

So much for these guys being chill aliens.

The closing montage reminds us that Chloe has mysteriously healed, which is her main concern. Rush sits around feeling sorry for himself. Everyone else mourns Telford and Riley (still). But, c’mon … we know Telford is gonna be back. 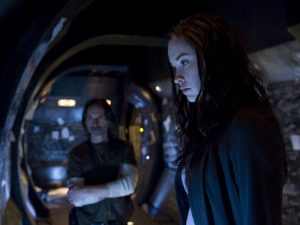 Looks like in this episode we may get a bit more information about Chloe. She’s apparently been acting strangely for a while now, and people are getting concerned.

But, more pressingly, Eli’s mother has taken a turn for the worse — so he’s off to Earth via the stones to check on her. She’s fallen into a depression and is losing the will to get better.

Eli’s trips to Earth are heartbreaking. Everyone else on Destiny just tells their family what’s going on and where they really are. But Eli has to keep his mother in the dark about having been kidnapped by the Air Force and now being stuck on a runaway spaceship. No happy reunion for Eli.

His mother is questioning why he won’t call, much less visit himself. So Eli calls an audible and tells her the truth. She believes not one word that comes out of that boy’s mouth.

This is the normal reaction I’ve been waiting for from people on Earth. I was disappointed when they let Eli’s mom use the stones to go to the ship. It’s too far for me. I liked the character drama and personal conflict that Eli was dealing with. Having her see the truth for herself instantly dissolves all of that. 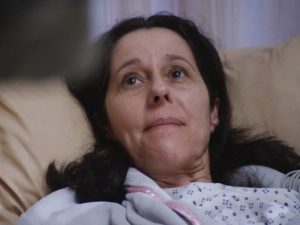 Maryann doesn’t believe what she is hearing from Eli, who visits her in someone else’s body.

Meanwhile Chloe is wandering the ship as if possessed, checking out control systems and other technologies. Lt. Scott becomes worried that she has been possessed or body-switched with the Smurfs. And after finding her diary written in an alien language it seems he is on to something.

Rush theorizes that Chloe may be slowly changing into one of the aliens. He suggests following her to observe her behavior.

And in typical Rush B.S. … of course he knows more than he’s letting on. He suspects and convinces the others that Chloe has hijacked the systems — even though he’s the one fracking with the ship! Rush is now using her condition for his own personal gain.

And finally, Simeon is just as smarmy as we’ve come to believe. I was hoping Greer would kick his ass and be done with it.

In the Next Installment: Matt dreams of a small-town life in “Cloverdale,” and Colonel Young may slowly be going mad in the Destiny-destroying “Trial and Error.”

Really enjoying reading/listening to your experiences of SGU for the first time!, Makes it seem like we were back in 2009-2011! I’m curious to know, how do you think that SGU holds up as a sci-fi show (rather than a Stargate show) for a newcomer after all these years? Do you notice the difference in the time that it was made, or does it feel like it could be a brand new show?