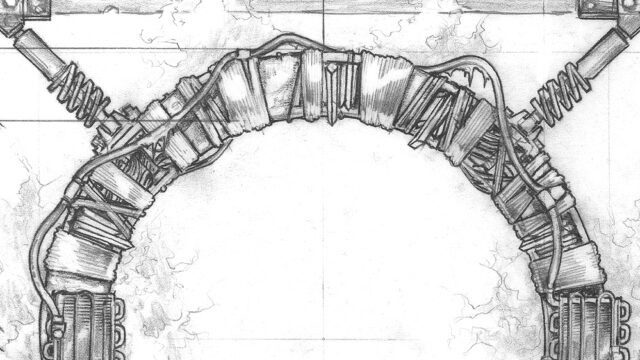 If there is one thing fans can count on in a new Stargate television series created by Brad Wright, it’s that each show is bound to have its own Stargate with a unique look.

The gate is iconic, and a signature for the show — from the classic red and grey of the Milky Way gates, to the digital blue vibe of Atlantis, to the steampunk aesthetic and white chevrons of SGU. So it’s no surprise that Wright’s plans for a fourth show set in this universe also include a new model of Stargate … even though the show is set on Earth.

Wright revealed the idea behind the new gate during The Companion’s “Stargate Legacy” 25th anniversary livestream.

“In my pilot script that I wrote … a couple of years ago, when MGM asked me to write a pilot script for a new show, I had an entirely new, human-built Stargate,” Wright said. “And it just spun up like crazy and then …” rapidly locked each chevron into place to establish a wormhole.

“I thought it’s about time that we sped up the process, after 25 years! Don’t you think? … It’s cool. It’s really cool, at least in the script.”

Each of the three live-action series has featured a different Stargate, built by the Ancients at different points in their history. With a new series set in the present day it has been decades since the founding of the Stargate program. And with everything the S.G.C. has learned about the gate and its operations, it makes sense that the next evolution of the Stargate would be built by humans based on Ancient principles.

A new style of gate would also open up new avenues for story ideas, if perhaps the human-built gate doesn’t work quite the same. 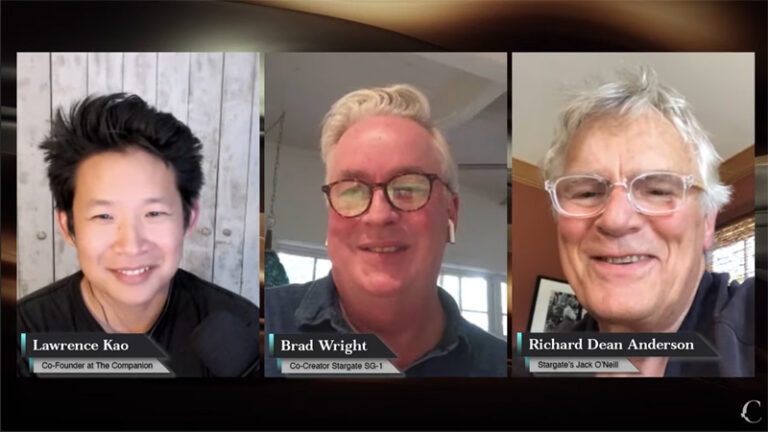 The writer and co-creator of Stargate SG-1, Stargate Atlantis, and Stargate Universe has previously revealed that in his fourth show the Stargate will be public knowledge. He’s also written several SG-1 favorites into the pilot, including (but not limited to) Amanda Tapping’s General Samantha Carter, Michael Shanks’ Dr. Daniel Jackson, and Ben Browder’s Cameron Mitchell.

Wright completed his pilot script for a new series in the franchise early in 2020, just in time for COVID to shut down all film and TV production and studio pitch meetings. He did some rewrites and polishing in the interim, but eventually MGM put Stargate’s development on hold and entered into negotiations with Amazon to sell the company. That deal was announced in May of 2021, and after the usual regulatory hurdles closed last March.

With Amazon and MGM announcing this year that the deal was complete, Wright sounds like he is still waiting along with the rest of us to find out what the company wants to do with the Stargate franchise. Now in July he expressed some pessimism that his new script “will probably never see the light of day.”

On Twitter, though, he sounded optimistic that Amazon will do something with the Stargate brand.

Happy 25th anniversary to Stargate SG-1! And thank you to everyone who's been asking MGM and Amazon to bring Stargate back. With amazing fans like all of you, I'm sure they will. #StargateSG1 #25thSG1Anniversary

“Happy 25th anniversary to Stargate SG-1!” he wrote. “And thank you to everyone who’s been asking MGM and Amazon to bring Stargate back. With amazing fans like all of you, I’m sure they will.”

We just hope it’s a continuation of the existing universe that Brad Wright helped to create.

Especially also after the twitter event of yesterday, where the only sound on the other side was the sound of silence. Nothing on Stargate Command youtube/twitter/facebook, nothing on MGMstudios or Amazonstudios Twitter, … The day came and went, but without much result I’m afraid. I have actually been wondering if this whole social media campaign and the 365 days of Stargate wasn’t way too early. If Amazon is still busy merging with MGM, doing their due diligence, mapping the landscape at MGM, cleaning up, … and are in no means far enough to already start looking at new initiatives based… Read more »

When companies merge “officially”, the actual merging part has usually already been done in the desks long time before. Like tiding up and everything. Most likely, a new Starget is in the works and we just don’t know about it. Why would they make it public anyway? It’d make other streaming platforms rush to make their own sci-fi asap to compete with it. I am positive too that something is going on. I am however much convinced that it is with new producers. For the record, about not having official answers to yesterday’s tweets, when Manifest rallied too for a… Read more »

Come to think of it, I also have a bit of an impression, with that latest tweet of Brad, that it sounds a bit like a farewell-tweet too, like the last one leaving closes the door and turns off the light, or maybe I’m reading too much into it? “With amazing fans like all of you, I’m sure they will.” Again, BUT… “it’s probably going to be without me, and I just hope you get something for your effort this last year on social media”. But I’m still convinced Brad already knows more. Maybe not about what any new series… Read more »

I was there yesterday and he said it clearly and with resignation: “will probably never see the light of day.” I’m sure that Brad knows more than what he’s allowed to say. Amazon has already asked Bond producers to rethink of the character and the upcoming movies, and they’re comissiong a team to put up a Bond tv series too. It’s just logic to think that another Stargate is on the works. For the Moonlight premiere, Emmerich said something really interesting. He said he “understood” that neither him or anyone else can get a character that’s thirthy years old and make… Read more »

Remember where exactly it was in the session yesterday where he said that, that it would probably never see the light of day?

At exactly 26 minutes and 10 seconds in.“in my pilot script, that probably will never see the light of day”.

Alright, that kinda settles it for me, Brad’s script is out, damn :(

_ welcome back and keep the wishes gushing, who knows some aliens, interplanetary kind, may have gotten an idea from this ‘dream’ of “earthers” . .. …

Was hoping, running out of tv to watch, new stuff is mostly trash. Have rewatched ,streamed all my scify series over and over Lol

I think you are forgetting how many of the Atlantis fans were openly hostile towards SGU when it first came out. Do you remember the website SGU#####?

Okay, I like the idea of the Tau’ri making their own Stargate after all these years, but I still say, and I will continue to say, that MAKING THE STARGATE PUBLIC KNOWLEDGE IS A MISTAKE! Also, I’m glad Mitchell wasn’t forgotten in the script. He’s an underrated character.

Don’t know why you still expect something. The 25th anniversary is really nice, but a new series? The only thing which could happen is a woke reboot, whoever is behind the script, all would be terraformed to fit expectation of monetization trough cancel culture by redoing things with new standards… Also, we have rumors and chit-chat since what, before Origin failure about something from Wright, who was working for Travelers, cancelled, and now guys think something will happen for the franchise? There is more fan-fiction ongoing on the internet about Stargate than concrete announcement beyond tweets… A lot novels, a… Read more »

Would jump RIGHT on a new Amazon Stargate

You had a perfect good Stargate in Stargate Atlantis that you prematurely trashed just so you could focus on that garbage called SGU. I still haven’t forgiven you for that. A new SG world had better be just as much fun as it was with Sheppard and McKay… But I sincerely doubt you’ll even come close.

They (the US Government or at least the IOA) still have the Orlin gate, even if it is “burned out” – they could very well have figured out how to reverse engineer it considering it was made entirely with earth-made parts.

I challenge anyone to fire up any of the episodes from SG1 and find anything available in the past 5 years that’s as good, the writing, characters, sets, character and story/plot development, humour, comic timing, all surpasses pretty much anything available today, Picard, discovery, strange new worlds all pale in those qualities, relying more on cgi “eye candy” to wow the audience, stargate gave us excellent characters and allowed those characters to play the stories and plots out, no agendas no forcing political policies on its audience, no forcing race or gender views, yet they did the entire run of… Read more »

The Orville season 2 and New Horizons. It will surprise you how good it is for a newer show

Not interested as long as he continues to insist that the gate be public knowledge. I’d rather a reboot than that (and I am NOT a fan of a reboot – but I would at least give one a chance as long as it largely adheres to the TV shows canon (at least the broad strokes – go’auld as snakes, asgard, nox, etc. all exist etc.) and not just the first movie) I do like the idea of us building our own gates – although I think we should do it by finding a broken down seedship somewhere in another… Read more »

Yeah I can see they might have made some advacnements, but a human-built Stargate might not be the best way to go. One of my ideas actually was that they found the template for a newer generation of Stargate in the Atlantis database and used molecular construction chambers to fabricate one. But a totally human one – that sounds WAY TOO SOON. Probably would be a deathtrap, not to mention not as reliable as the Ancient versions. Could see a LOT OF PROBLEMS with it.

What if Stargate Universe series stars from where it ends. I liked the most, the concept was entirely different from both SGC and SGA.

I request to begin with SGU with new season…

As a fan of Stargate, I was hoping for a mini series that brings all three series together, so we can see what happens when the Stargate goes public, we could see how the war with the Wraith comes to an end and how the team aboard Destiny, escape their confines to the ice boxes and find the answers they are looking for.

These are the questions I think we all want to see and not some new version that leaves us wanting closure to the team we know and love.