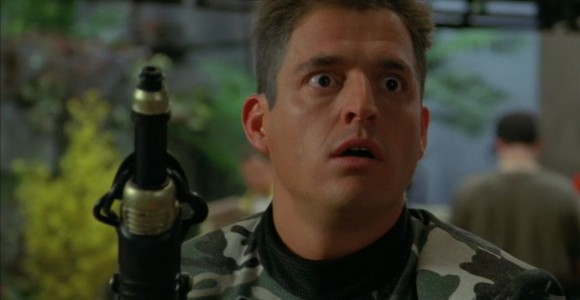 An alien ship approaches Earth, sending SG-1 to an old friend for some answers -- where they discover that Martin Lloyd has created a TV show about the Stargate program.

A massive space ship in the outer solar system roars to life, and begins an approach toward Earth. The United States military picks it up while it's still a few days away, and discovers that the energy signature matches that of Martin Lloyd's escape pod ("Point of No Return"). It's up to SG-1 to find Martin and see what he knows about the ship and its intentions, knowing that his fellow aliens are hiding out somewhere on Earth.

The Air Force tracks down Martin, and the S.G.C. receives a surprising video tape -- a preview for a television show based on SG-1 and the Stargate program. Nick Marlowe stars as "Colonel Danning" in Wormhole X-Treme!, which Martin sold to the studio and for which he is now the "creative consultant." But they decide not to shut it down in the interests of national security, since the existence of such a show gives the government plausible deniability about the existence of the S.G.C.

Jack O'Neill is appointed as the Air Force special advisor on the show, and heads straight for Martin's trailer on The Bridge Studios lot. He confronts the socially-inept man, believing that he sold them out by revealing the real Stargate program -- although the show itself is an off-the-wall, accidentally comical farce.

But Martin doesn't remember him -- in fact, he has no memory of his experience with O'Neill and the real-life Stargate one year ago. O'Neill suspects that Tanner and the others have drugged Marty again, and finds vitamins in his trailer that he sends off to be analyzed. Dr. Fraiser soon reports that they contain the same chemicals that Tanner and his men once used to suppress Martin's memory.

On the set of Wormhole X-Treme!, Jack watches as the flamboyant director tries to hold together a cast of hack actors who take themselves too seriously -- especially Nick Marlowe, who plays O'Neill's counterpart. Every script seems to call for "Colonel Danning" to shoot up a room full of aliens, and always -- always -- get the girl.

The cast also includes Yolanda Reese as Major Stacey Monroe (a brilliant scientist), Raymond Gunne as Dr. Levant (Daniel Jackson's brainy counterpart), and Doug Anderson as Grell the robot (who never seems to get any dialogue).

Meanwhile, Sam Carter and Daniel Jackson monitor Martin's home. They find that he is being watched with electronic surveillance, and soon discover that one of Tanner's men (and an alien, like Martin) is working on the set of Wormhole X-Treme! They find out where he lives and wait for him to arrive, but when they break into his apartment he is nowhere to be found.

As the ship draws nearer to Earth, Teal'c serves doughnuts to the show's crew, and Jack confronts Martin with the truth. He tries to get him to remember their first meeting a year ago, and that Martin is from another planet. But Martin, longing for the power and prestige of television (where he still doesn't get any respect), thinks that O'Neill is pitching a story to him.

Martin is paged to an empty studio lot, and O'Neill follows. He thinks that the crew is just playing another joke on him -- until Tanner and his men show up. They tie Jack and Martin to two chairs, and inject Marty with a drug that breaks down the memory block. He remembers everything, and realizes that he subconsciously pitched the real Stargate program as an idea for a TV show.

Carter and Jackson trace the men who have been watching Martin, and find an N.I.D. team hiding out in a local warehouse. The N.I.D. -- a secret arm of the U.S. government, with whom the S.G.C. has had frequent troubles -- knows that Martin is an alien, and have been waiting for just such an opportunity as this. When the powerful and advanced alien ship arrives, they will seize it.

Jack and Martin manage to get free, and head to the studio set to find the control device that Martin took from Tanner last year -- which is necessary for gaining access to the ship, once it arrives. Since Martin didn't remember what it was, it's being used as a prop on the show. O'Neill gets his hands on it in between takes, but he and Martin are again cornered by Tanner and the others. They allowed Martin to get free, so that they could follow him to the control device.

The massive ship arrives overhead, and the cast and crew are stunned -- but make sure to get it all on tape for the show! Tanner reveals that he and his men only wish to leave Earth -- there is nothing for them there. The ship is on automatic, having been programmed to return for them as a back-up plan. With the N.I.D. closing in, O'Neill hands over the control device, and the men transport away.

Martin, though, has apparently found his calling in life. He remains on Earth, as the creative consultant for Wormhole X-Treme!