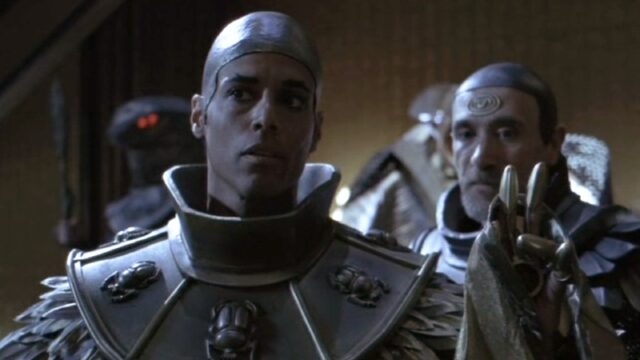 The Goa’uld System Lord Apophis made a great foil for the SG-1 team in its early years. In ancient Egyptian mythology he was the brother of Ra, the serpent god who ruled the night — only to be chased away by the sun god every morning.

On Stargate SG-1, Apophis was a powerful Goa’uld who set his sights on Earth. And this wasn’t just an ordinary bad guy: the members of SG-1 held very personal grudges against him. Apophis had abducted Jack O’Neill’s friend Skaara, who had reminded the Colonel of his late son. He kidnapped Daniel Jackson’s wife Sha’re, implanting her with the symbiote that was his own queen. And to Teal’c he was a false god, who had ordered him to commit atrocities for decades, and who had condemned Teal’c as a treasonous shol’vah.

To go along with GateWorld’s brand new interview with actor Peter Williams, we are celebrating Apophis with this complete and exhaustive watch list! What better way to binge a great run of Stargate episodes? Follow the list below for your next thematic binge, and be sure to check out our interview with Peter.

Ready to kneel before Apophis? Here’s the watch list from Stargate SG-1:

CHILDREN OF THE GODS 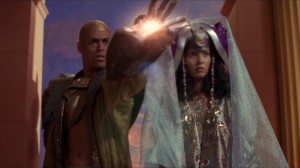 Apophis’ introduction sees the Goa’uld invading both Earth and Abydos, searching for candidates for a new host for his queen, Amonet. This launches a new mission that sends Colonel O’Neill back through the Stargate, where he is reunited with Daniel Jackson. Eventually they’ll go to the enemy stronghold on Chu’lak, to confront the “brother of Ra” directly — and launch a new series of high-stakes adventure. 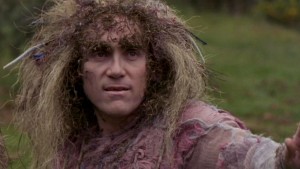 SG-1 goes to the Nox homeworld in search of a legendary flying creature that the Jaffa believe can turn itself invisible. But their timing couldn’t be worse: Apophis is also there, leading a hunting party in search of the flying fenri. The team decides to ambush him … at which point things go horribly wrong. 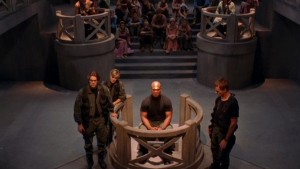 The team visits a planet where Teal’c has been before, while he was enslaved as the First Prime of Apophis. Teal’c is accused of murdering an elder villager, and he recalls how he responded to Apophis’ order years ago. Then, Apophis’ forces interrupt the trial when they arrive on the planet once again.

WITHIN THE SERPENT’S GRASP 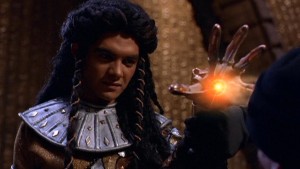 The show’s first big season finale brings back Apophis in a big way, as the System Lord has ordered a direct assault on Earth itself. SG-1 gates on board a Goa’uld mothership commanded by his son, Klorel — now in the body of Skaara! And Apophis promises to meet him soon … 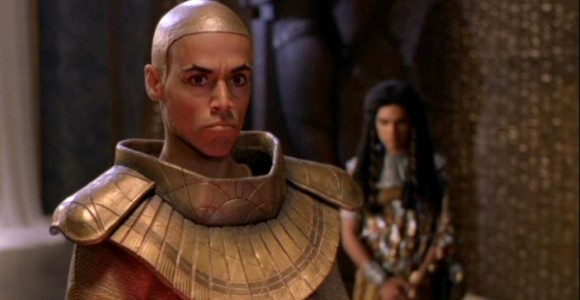 The cliffhanger finale is resolved in the Season Two premiere, with SG-1 struggling not just against Klorel but also a second mothership that has shown up in Earth orbit — commanded by Apophis himself! They’ll need some inside help if there is any hope of saving the Earth from all-out alien invasion. 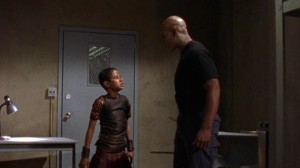 The team learns that Apophis isn’t as dead as they thought, though his recent defeat has dealt him a serious blow. The other System Lords smell blood in the water, and the sharks are circling. Now Apophis has returned to Teal’c’s home of Chu’lak, and has brainwashed his son Rya’c to turn against Teal’c. 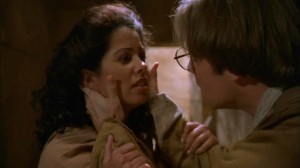 Daniel returns to Abydos to report that so far he has been unable to locate Sha’re … only to find that she is there waiting for him! Daniel’s beloved is pregnant with the child of Apophis, and her Goa’uld symbiote sleeps until she has given birth. With help from Teal’c, Daniel must find a way to save Sha’re and her child before Apophis — or one of his enemies! — returns for them. 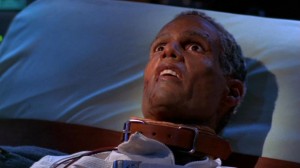 One of Apophis’ many adversaries amongst the Goa’uld has finally gotten the best of him. Captured and tortured, Apophis escapes from Sokar and tricks SG-1 into meeting him on a neutral planet. When his death glider is shot down near the Stargate, a wounded and helpless Apophis demands sanctuary on Earth. SG-1’s greatest foe is finally within their grasp. 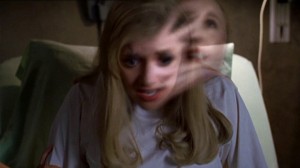 An alternate version of Samantha Carter and Major Kawalsky come through the quantum mirror from a parallel reality, seeking sanctuary after their own world was invaded by the Goa’uld. But after Earth officials give the OK, Dr. Carter experiences a disturbing and painful series of tremors — entropic cascade failure. Since there are two of her in this universe, if she stays she will die.

To help their new friends, our SG-1 travels to another reality to try and liberate it from the Go’auld invasion force — leading to a face-to-face confrontation with Alt-Apophis, goatee and all! 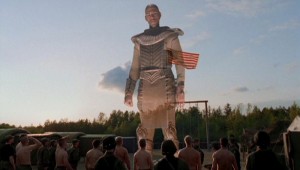 SG-1 finds a group of young people dressed in S.G.C. gear, engaged in what look like military training exercises on another world. When they investigate who these kids are and what they are up to, Teal’c discerns that they are in fact in the service of a Goa’uld. They have been recruited by Apophis himself to be trained as spies, hoping to infiltrate Stargate Command. And now blood has been spilled!

Apophis himself isn’t just pulling the strings behind the scene here. Look for him to make a key appearance by way of a holographic recording. 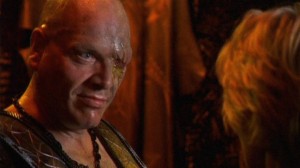 SG-1 and the Tok’ra Martouf secretly infiltrate Sokar’s prison colony on the fiery moon of Ne’tu, in order to rescue Jacob Carter — or at least find out what he has learned about Sokar’s plans to topple the System Lords. Of course the team is quickly captured, and when they try to make a harried escape they are confronted by an old foe — resurrected from the fires of Ne’tu!

THE DEVIL YOU KNOW 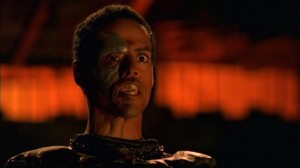 With SG-1 under his thumb and Sokar building the largest army the Goa’uld have ever seen, Apophis uses a memory recall device combined with a powerful hallucinogen to try and force SG-1 and Martouf to reveal their most precious secrets. But whether he can gain any new intel or not, count on the fact that Apophis is finally going to make his move against Sokar! 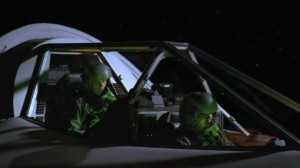 Apophis has just an audio cameo in this terrific story, which sees Jack and Teal’c trapped in a retrofitted death glider headed out into deep space. Earth’s attempt to modify the enemy ship failed to detect Apophis’ recall device, which summons the ship to Apophis’ homeworld and leaves Jack and Teal’c quickly running out of options. “Cheyenne, we have a problem.” 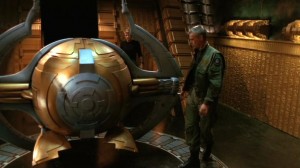 Apophis is fully in charge when he resurfaces in this pivotal episode. The Tok’ra learn that the Goa’uld is about to meet with his competitor Heru’ur to discuss an alliance, and with SG-1’s help they plan to sabotage it by detonating a minefield … the same minefield where the meeting will take place! Apophis has the full force of his new fleet, and he isn’t about to go quietly. 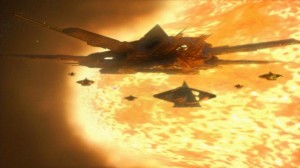 With Apophis now a bigger threat than he has ever been, and the location of the Tok’ra new base on Vorash revealed, SG-1 and Jacob realize they have a unique opportunity to deal a massive blow before Apophis decimates the other System Lords and conquers the galaxy. With the enemy fleet on the way the base will be quickly evacuated … so that Major Carter can use a Stargate to blow up the Vorash star, hoping to catch Apophis’ fleet in the supernova. 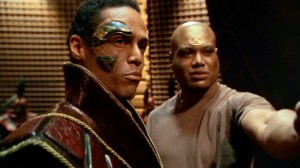 In the fifth season premiere SG-1 and Jacob have been knocked way off course, coming out of hyperspace in another galaxy … and Apophis’ mothership is right there with them! As if that wasn’t trouble enough for one episode, both ships are soon overrun by Replicators.

It’s a lot of fun to kick off the new season by mashing the show’s two biggest antagonists together. Now Apophis himself has to deal with Replicators for a change! 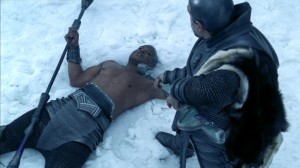 “Enemies” is followed by this fantastic flashback episode for Teal’c, who has been brainwashed to serve Apophis once again. To recover his true path Teal’c must undergo the deadly Rite of M’al Sharran, which causes him to relive his past — from a young warrior with aspirations, to First Prime of Apophis, to the hard lessons he learned from Bra’tac that sowed the seeds of doubt in his heart. 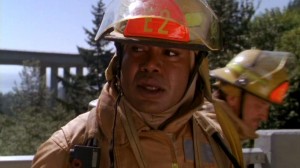 Teal’c is again near death in this episode, his mind moving back and forth between realities … and he isn’t sure which one is real and which is the dream. In one he is Teal’c, an alien and member of SG-1. In the other he is “T,” a human and a firefighter who is anxious about donating a kidney to save the man who is like a father to him. Apophis’ cameos are brief, but a fascinating (and disturbing) corner of Teal’c’s psyche. 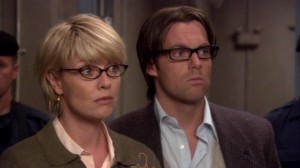 History has been all messed up! After a quick time-travel op goes off the rails SG-1 is stranded in the past, and the timeline we know and love plays out in some very different ways. After Alt-Sam and Alt-Daniel convince Alt-Jack and the newly formed S.G.C. to let them join the first mission through the Stargate, they travel to Chu’lak … where, of course, in this timeline Apophis is still alive and well! (And he’s not taking guff from any uppity Tau’ri.) 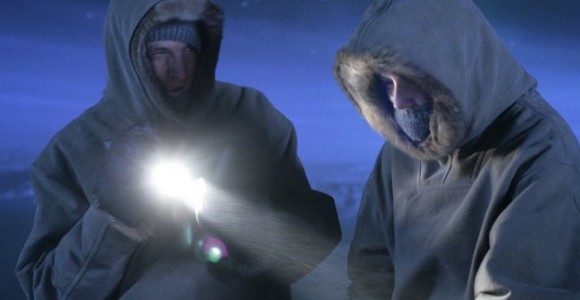 Apophis’ final appearance comes in SG-1’s final story, though once again it’s a quick cameo. In this movie the System Lord Baal has used time travel to create some shenanigans of his own, altering Earth’s past by taking their Stargate out of the equation. Baal uses his knowledge of the future to change the course of Goa’uld history too, rising to the status of Supreme System Lord and enlisting all the other once-powerful Goa’uld to serve him.

Baal is happy to give orders to the likes of Cronus, Nirrti, Camulus, and others. (Even Ra is here!) But as for Apophis … no, evidently the mighty Apophis is unwilling to serve.