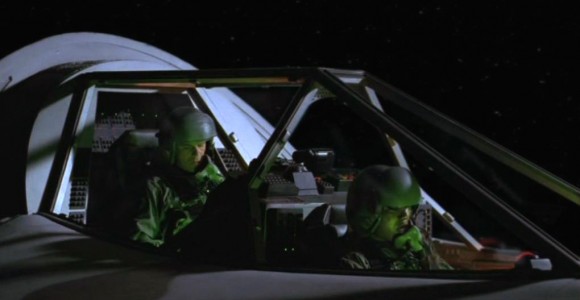 "Tangent" was everything I could ask for in an episode. Drama, suspense, action, adventure and humor all rolled up into one neat, tidy and well-wrapped package. We even had a little visit from one of our favorite Tok'ra -- Sam's father, Jacob -- and what might have been a glimpse into a Tok'ra's influence over it's host. (Has Jacob truly come to realize that humanity is, in fact, infantile and careless in its naivete, or were his opinions the result of Tok'ra arrogance -- even though it was Jacob speaking rather than his symbiote?)

Here is another teaser in a season of teasers created to make us all second-guess the Tok'ra's intentions and their true nature.

It was intriguing, but in keeping with this season's course, to hear that the Tok'ra were capable of rescuing the Colonel and Teal'c, but that the now infamous High Council had declared they could do nothing until their closest operative, Jacob, had completed his current mission.

It was even more intriguing to learn that Anise had surreptitiously supplied Daniel with sufficient information to allow the S.G.C. to contact that operative themselves, though the Tok'ra's mission could thus be jeopardized. Daniel, of course, was too angry to recognize this little seed of help. After all, our favorite archaeologist is not military and has a lot to learn about the tricks of the espionage trade; and let's not forget that Anise's symbiote was said to have romantic interests in him. His awareness of her interests could easily cloud his mind, and strengthen his frustrations.

This brings up another question: did Anise provide that seed for the sake of relations with the S.G.C. and Earth, or merely because Anise herself has romantic interests in Jack? Ah, the plot thickens ...

From a plotting perspective, "Tangent" was very well orchestrated. The three major threads -- Jack and Teal'c trapped in space, the S.G.C.'s coordination of rescue efforts, and Sam and Daniel's mission to enlist Jacob's aid -- were expertly woven, providing us with a solidly told story that left no holes, and no loose threads to keep us hanging.

Unlike "Watergate," which left me with an empty feeling,the sense that the story itself was incomplete, "Tangent" was wrapped up in a perfect bow; yet it still managed to end with a few questions that may or may not be answered in future episodes -- questions such as: why are two Goa'uld mother ships and a "bad neighborhood," as Jacob phrased it, so "close" to Earth?

The only potential hole I found had to do with the glider. Will it continue to float in space, allowed to wander back to Apophis in the next few hundred years? Will some stray Goa'uld or other race find it, and trace it back to Earth? Will there be repercussions? But rather than a true "hole" or loose thread, I see this more as a teaser, a curiosity to keep in mind and look for later in this or future seasons.

I loved the drama associated with Jack's and Teal'c's predicament. There was a moment when they were acknowledging the hopelessness of their situation and the camera panned away in conjunction with a wonderful musical composition that drew me in and gave me pause. I "felt" this moment far better than the one in last season's "Nemesis" when Teal'c was floating in space unable to get back inside Thor's ship. The sense of drama that I found missing in that episode was well accounted for in this one.

There was also a good deal of suspense here, particularly when Sam and Daniel were transported onto Jacob's ship. I truly did not know who might come through that door as Sam trained her weapon on it in anticipation. I thought perhaps these two members of SG-1 had tripped some sort of booby trap on the planet and might need some rescuing themselves.

I liked the bickering between Jacob and Sam. As father and daughter they had surely done a lot of arguing in their past, especially considering that they had been estranged. Yet since Jacob became a Tok'ra they've had nothing but respect and appreciation for one another. The bickering in this episode lent a greater sense of reality to their relationship, as well as providing the teaser mentioned above regarding the Tok'ra symbiote's influence over its host.

Though it was based in space, this episode did seem to stay grounded in reality. From our retrofitting a death glider despite our failure to understand the physics behind it, to the time-lagged communications, to the attempted use of the glider's missiles to boost its thrust for a sling-shot effect around Jupiter, the entire episode had a sense of believability.

I wasn't entirely sure about the moment between Colonel O'Neill and Teal'c exiting the glider into space and subsequently being picked up by the transport rings. It seemed to me they should have somehow clung together to ensure they were close enough to be safely and simultaneously transported onto Jacob's ship. However, I'm no physicist, so I'm not one to judge whether or not that might have been a discrepancy. I only mention this because it was, quite frankly, the single potential flaw I observed. Nothing else in the scripting or the production itself disturbed me even the slightest bit.

As for the time-lagged communications, I couldn't help but notice that Jack's tirade about Apophis was hopelessly garbled by the time it reached the S.G.C., though the rest of his message made it through pretty well. Had he consciously prevented those words from transmitting?

Clearly, despite the drama and suspense already discussed, "Tangent" was not without humor. Right in the beginning when SG-1 is introduced to the general from the pentagon and all those titles get tossed around -- i.e. "Colonel," "General," "Major," "General," "Doctor," "General" -- it was made clear this would be a traditional SG-1 episode. One line which will long be a favorite was Daniel's admission to having introduced himself to the Goa'uld as "the great and powerful Oz." This is surely a classic Stargate SG-1 moment.

To the credit of the writers, all of our favorite characters were true to form in "Tangent." Daniel's having to ask the time while still transmitting his message to Jack, Teal'c's declaration that he sees O'Neill as a brother, Jack's "back at you" comment in response, and Sam's never give up, there's always an answer attitude were perfect. I also enjoyed seeing Major Davis again. It's good to know someone in Washington honestly cares about the S.G.C. and SG-1, especially with the likes of Senator Kinsey and Colonel Maybourne floating around.

The cast and crew certainly put their best collective foot forward this week. "Tangent" epitomizes what Stargate SG-1 is meant to be.