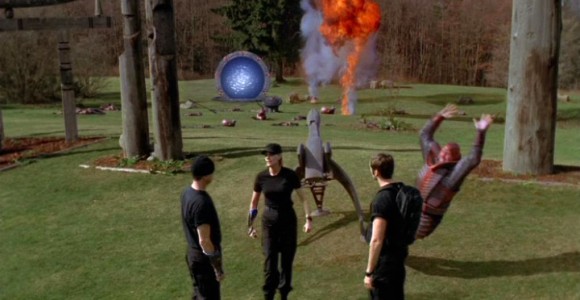 A welcome reprieve from last week's dark episode ("The Other Side"), "Upgrades" was highly entertaining. However, this was every bit a comic book story, and as such simply could not be taken seriously. With even Jack noticing the "cliché" in the moment just preceding the great bar-room brawl -- a scene which will surely be a favorite among fans for a long time to come -- I can accept that the intent of the writers was just to take us all for a little joy ride through fantasy-land.

Nonetheless, I could have done without the Speedy Gonzales / Tasmanian Devil dashes. And why did I keep expecting Linda Carter to show up in her Wonder Woman suit?

In the summer of X-Men, the new movie starring Patrick Stewart, I suppose it should not be surprising to see Stargate SG-1 also taking a little jaunt into the land of comic book heroes. I can't even say it was entirely disappointing. After all, this episode truly was fun to watch. There were some wonderful moments, particularly when Jack got the better of Teal'c during their boxing match, and when he accidentally knocked Siler down the stairs -- which in itself seemed a hilarious bit of slap-stick until we see that the poor sergeant is really hurt.

The barroom brawl was also an enjoyable escape from the traditional, with quiet archeologist Daniel Jackson actually taking on (and successfully, I might add) the big guy who dared to call him a geek. Way to go, Daniel! This was a moment Dr. Jackson will surely cherish for a long time to come.

The special effects in this episode were also superbly handled. Although giving three members of SG-1 the ability to run "faster than a speeding bullet" seemed like overkill, I applaud the craftsmanship behind the effort to depict this feat. A splash of color, a few flying documents here and there, and voila! What was that breeze that just blew through here?

I was particularly impressed with the way the force fields on Apophis' new battleship were presented. More than just a wall of light that sparked or flared at a touch, the iced-over imagery of these force fields truly appeared to have the "force" of a solid wall. This was the first time I've seen such an accomplishment in any science fiction endeavor. Sam's running smack dab into the one, and Jack's subsequent attempts to get back to her were wonderfully rendered.

In terms of character development, I like the concept of the newest Tok'ra. Actually, I can't stand Anise. I don't trust her. She acts too much like a Goa'uld with her superior attitude, her constant demands, and the way she hides information. As the good general accused, she is manipulative. She will get the S.G.C. to do what she wants, and will regret none of the potential repercussions. These are all fine reasons to add her to the cast. Keep us and the S.G.C. guessing.

After all, the Tok'ra and the Goa'uld are of the same species. Just because the Tok'ra appear to be more humane than the Goa'uld does not mean they are completely on Earth's side. They have their own goals. As long as Earth can help them, they will ally with the S.G.C. But would they come to Earth's aid if they had nothing to gain by it?

I also can't help but wonder why the Tok'ra did not attempt to blow up Apophis' new ship themselves. They obviously had someone on the inside capable of obtaining all of the ship's diagrams. And if they insisted on experimenting on the people of Earth, why would they automatically choose to risk the S.G.C.'s primary team?

We'll have to stay tuned to see what answers may be forthcoming.

The chief weaknesses of this episode are directly related to its comic book styling. The climactic scene where all of SG-1's super-powers failed pretty much simultaneously at the(of course) most inopportune moment (and despite the fact that Jack got his arm band well before Sam and Daniel) was way too contrived. The Speedy Gonzales dashes were too far-fetched. The unfortunate Siler probably should have ended up with a broken back, rather than just a broken arm, given the way he was seen to have landed on the stairs. And the newest cast member, Anise, with her skimpy leather dress and high boots, looks more like a combination between a Conan heroine and a Batman villainess than a Tok'ra.

As a comic book endeavor, "Upgrades" worked very well, indeed. But when it comes to serious sci-fi, a category into which I can't help but place Stargate SG-1, this episode lacks one of the key ingredients for a successful and intelligent production in the genre: believability. Nonetheless, if they had fun producing this one, and we had fun watching, what's the harm in a little side trip into cartoon land?