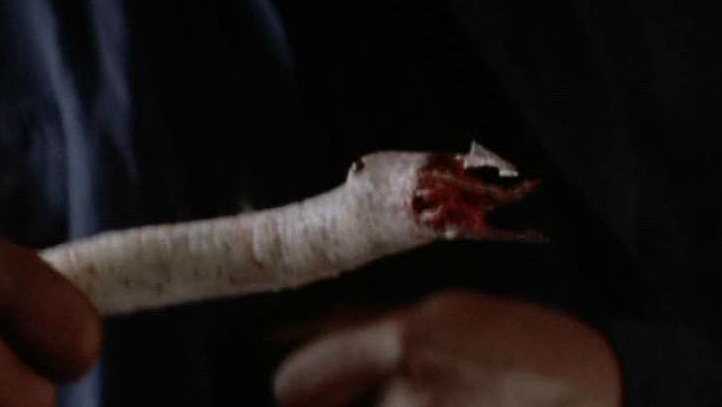 Teal'c's symbiote, a larval Goa'uld, named "Junior" by Jack O'Neill. The symbiote saved Teal'c's life a multitude of times over throughout the years the Jaffa maintained and incubated him -- though as a Goa'uld it showed its hatred for him more than once.

Eventually the symbiote was killed while trying to sustain the lives of both Teal'c and his master, Bra'tac, after a horrific massacre on planet Kresh'ta. From that incident forward Teal'c and Bra'tac lived without symbiotes with the aid of the drug tretonin.

FIRST APPEARED - Children of the Gods

Children of the Gods - Teal'c reveals his symbiote, later to be dubbed Junior, to SG-1 and Apophis's freed captives, explaining that if he were to remove it he would eventually die.
The Broca Divide - Teal'c's symbiote protects him from the histiminalytic virus in the Land of Light, causing his comrades to revert to proto-humanoids.
Thor's Hammer - The hammer device on Cimmeria detects the presence of Junior and forces Teal'c into a deep, dark subterranean cave system.
Bloodlines - Teal'c turns over his symbiote to save Ry'ac's life, later taking on a barely mature symbiote which will sustain his life for up to seven (or thereabouts) more years.
Hathor - Teal'c's symbiote protects him from Hathor's powerfully intoxicating organism.
Singularity - Teal'c's symbiote protects him from Nirrti's virus that destroyed the entire Hankan population.
Tin Man - Without the presence of Junior, the Altairan robot version of Teal'c turns into a primitively aggressive animal.
Within the Serpent's Grasp - Apophis, realizing Teal'c is aboard Klorel's vessel, orders the removal of Teal'c's symbiote, before Klorel intervenes.
Thor's Chariot - Teal'c learns the Asgard have designed the new Hammer device to recognize and disregard Teal'c and his symbiote as a threat to Cimmeria.
Message In a Bottle - Teal'c's symbiote sustains him from the spread of the Orb.
Bane - Teal'c discards Junior after he begins to turn into a number of the insects from BP6-3Q1.
Holiday - O'Neill's mind is transferred into Teal'c's body, and Teal'c (in Jack's body) shows him a technique to calm a stirring Junior (The first example of kel'no'rim).
Show and Tell - Junior detects the presence of Re'tu, sending Teal'c into a painful stir. He later comments (in ninety years of carrying symbiotes) he's never felt the creature become so disturbed.
Legacy - Teal'c becomes deathly ill after an invasion by Ma'chello's Goa'uld-killing technology, very-nearly succeeds in killing Junior.
Demons - Teal'c places himself in a deep state of kel'no'rim before drowning as Junior converts oxygen for Teal'c to barely stay alive.
Crystal Skull - Junior's presence prevents Teal'c from teleporting into another realm with the rest of his group to witness the giant aliens.
Upgrades - Teal'c's symbiote prevents him from using Atoneik technology.
Crossroads - Teal'c places himself in the deepest, most deadly stage of kel'no'rim and learns the queen Junior sprang from was present to witness his father's execution.
Divide and Conquer - Teal'c's symbiote prevents the possibility of him becoming a za'tarc.
Beneath the Surface - Because of the symbiote, Teal'c is able to have access to more of his past life before his memory stamp, and when he sees the pouch he fully remembers who he was.
The Serpent's Venom - Teal'c is tortured horribly, and Junior is no exception, succumbing to several attacks directly in the pouch via a Goa'uld pain stick.
Frozen - Teal'c's symbiote protects him from the virus Ayiana carries, perhaps the very virus that wiped out the Ancients long ago.
Cure - Teal'c encounters tretonin, a drug that he hopes may one day replace the symbiote within him, as well as all Jaffa who are enslaved by the creatures.
The Changeling - Junior is used to keep both Teal'c and Bra'tac alive after a horrible ambush on Kresh'ta. Consequently, it dies soon after, and he switches to tretonin permanently.