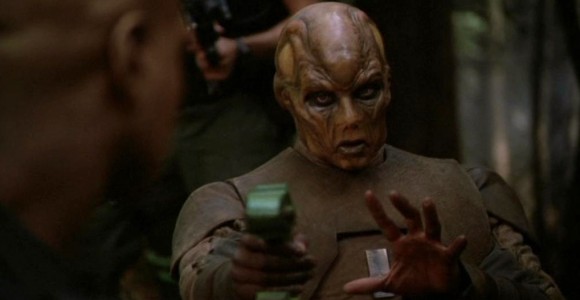 When the team finds a crashed ship on another planet, their efforts to help the crew effect repairs are hindered by a group of aliens.

"We go through the gate," Sam Carter explained in the episode "Last Stand," referring to the majority of SG-1's missions, "get into trouble, get out of it, we go home."

In "Forsaken," that's just what happened. There were no real continuity issues, references to older episodes, or significant reason to believe that the storyline will be revisited in the future. In retrospect, the plot is unremarkable: SG-1 meets stranded "good" humans from another planet, who are being hunted by "bad" aliens, but by the hour's end it's obvious that the bad aliens are actually not too bad, and the humans are the truly dangerous ones. This brand of stand-alone episode is almost a throwback to earlier seasons, but it did have its particular Season Six charms.

There's always a danger when a show sets up their characters to be fooled, because we like and respect the characters and dislike seeing them fail or be embarrassed. In the case of "Forsaken," Corso and his "crew" were charming enough -- and had a good enough story -- that SG-1 was convinced to help them. Considering the technology on board the Seberus and the possible opportunities for a new ally, it's hard to blame them for that. However, it's all too easy for viewers to become armchair quarterbacks. From the safety of our living rooms, we're naturally suspicious of new characters and wary of plot twists. The saving grace -- the thing that kept SG-1 from looking unfavorably naive, at least -- was the fact that the characters felt some of that same suspicion.

Because Jack and (we find out later) Jonas have their doubts, it justifies and reinforces the doubts of the audience. Instead of pinning the success of the episode on how convincingly "nice" Corso, Reynard and Pender came across, some skepticism is automatically assumed. Jack is less than eager to come to their assistance, and hedges when Earth and SG-1's nonexistent ship are mentioned. After the first attack by the mysterious aliens in the trees, he's irritated by Pender's itchy trigger finger and characterizes the aliens as "armed and apparently hostile."

Likewise, Corso tries just a little too hard when flirting with Sam inside the Seberus; he should know that, generally, women can sense desperation. Reynard applies her feminine wiles to Jonas, cooing over her rescuer and setting those big dark eyes to "doe," but the brief glimpses we get when she's alone are more than enough to raise our hackles.

One might think that having the audience all but waiting for the other shoe to drop would diminish some of the episode's dramatic tension. In my experience, however, it was the waiting for the inevitable bad thing to happen that heightened my interest. When Corso and the others ultimately reveal themselves, the viewer wonders, what will happen? SG-1 doesn't allow themselves to be tricked by the bad guys all that often, but when it happens, it isn't pretty. Just look at Linea in Season Two's "Prisoners."

Eventually it is revealed that the remaining "bad" alien is, in fact, the victim, and the three humans his escaped prisoners -- proving again that you just can't judge a book by its cover. It's a favorite theme of science fiction shows but still one that can be well-executed with enough creativity. One has to wonder: if the aliens hiding in the woods had in fact been human, and the "survivors" of the crashed ship had been three strangely-featured aliens, how would our reactions to them have changed?

Tricky plots and plot devices aside, it was character interaction that really helped to polish this episode and elevate it above some early-season stand-alones. From the beginning (Sam and Jack's banter) to the end (Jonas's insistence that Jack trust him), certain scenes highlighted the closeness and cohesion of the team at this point in time. Even such small details as Jack calling Teal'c "T," Hammond stopping by Jonas' office because he was "in the area," and Teal'c staying back with Sam while Jack hurries to the Stargate warm the episode by those few crucial degrees.

In the end, Corso and the others get a taste of their own medicine. They take Jonas through the gate under the assumption they're traveling to a planet with vast riches. While that's technically true, it's doubtful that the convicts will ever enjoy the various treasures of Earth. Either they'll be sent back to Hebridan or they'll be put wherever the S.G.C. puts all the other aliens they pick up and don't know what to do with. In either case, the beleaguered alien Warwick is able to put Sam's repairs to good use and make his way back to his planet.

In summary? They went through the gate, got into trouble, got out of it and went home.