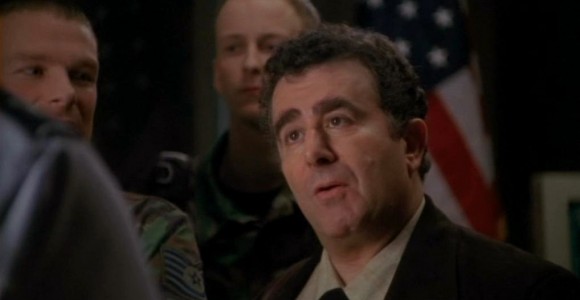 A film crew arrives to document the work of the S.G.C. for eventual disclosure to the public, but finds that the base's personnel are less than eager to participate.

It seemed impossible that "Heroes, Part 1" could live up to the hype surrounding it and its conclusion, with praise coming from those involved with the show for months prior to its air date. All too often, we fans are cynical of advance accolades, wary to expect great things and be disappointed. The first half of the "Heroes" 2-parter, however, was not disappointing in the least. Thanks in part to fine performances by Saul Rubinek, Adam Baldwin and Ronny Cox, this amusing and insightful episode sparkled and promised great -- although not necessarily upbeat -- things for the future.

Rubinek's Emmett Bregman is the driving force of the episode, a journalist invested in digging up the "truth" of the Stargate program: the heroism of the soldiers and airmen, the stories, the action, the human emotion. Both frenetic and manipulative, determined and strangely charming, equally sympathetic and annoying, Bregman is an interesting character with complex motivations and personality. His presence on the base is clearly unpopular, yet he persists, and one has to admire that persistence even as aggravating as our heroes find it.

Dave Dixon, played by Adam Baldwin, is another new character and another cornerstone of the episode. We spend a significant amount of time with Dixon and his team, SG-13, and because of time come away with the uneasy feeling that the team's number is prophetic, and that underneath their standard issue S.G.C. attire they are in fact wearing red shirts. That said, the four members of SG-13 have the repartee and a comfort with each other that makes it easy to believe they've been a team for some time. Dixon's deadpan "miracle of childbirth" monologue was perhaps one of the funniest moments of the episode ... not that there isn't plenty of competition for that particular honor.

Last, but certainly not least, Ronny Cox's brief appearance as the curmudgeony Senator Kinsey was another high point, especially his confrontation with Jack in the commissary. The two characters have a terrific tension on screen that's almost as fun to watch as Jack and Maybourne's constant sparring in episodes past.

"Heroes, Part 1" is lighthearted and even frivolous. It's always fun to see our favorite characters through the eyes of an outsider, to hear them talk about things that wouldn't otherwise come up. The highlights are many: Sergeant Davis trying valiantly to make his job sound interesting, Siler's stunts, Sam's hemming and hawing over her very professional relationship with Colonel O'Neill, Daniel's hallway antics, Teal'c's stony silence, SG-13's bet over what they'll encounter, Jack's comments about his rear end, and Janet's sly comment about her daughter being from another planet. The sense of humor imbued in the story is wonderful, and reminds us of one of Stargate's greatest strengths: it doesn't take itself too seriously; it isn't afraid to make a joke at its own expense.

Andy Mikita's directing must be mentioned if only for the clever back-and-forth between film and video, making it obvious in an understated way when we are seeing things as they "really" are, and when we are looking through Bregman's camera -- an outsider's view. Subtle, but effective.

The end of "Heroes, Part 1" makes it obvious that the episode was in a way nothing more than the set-up of a larger story. The tension boiling underneath the surface of the story finally rears up, and pushes the plot into something of a downward spiral that contrasts sharply with the joking and teasing that lured us into a false sense of security. As we fade to black, there's a sense of impending doom that overshadows the laughter and fun.

What's great about this episode: The guest stars add so much to this episode, yet at the same time they don't overshadow the performances of our stars. From all outward appearances, this was as enjoyable an episode to create as it was to watch. It didn't rely on special effects -- it was about the people.

What's not so great: The fact that it's yet to be completed, of course! No doubt part two will be even more hyped than the first half, making the wait to the weekend seem longer and more tedious than ever.

As an interesting departure from missions and Goa'uld threats, the first half of this 2-parter presented us with an attempt at making a documentary about the everyday workings of the S.G.C. The overwhelming aversion to this idea among the S.G.C.'s staff was made very clear from the very start with Hammond's no-nonsense discussion with the filmmaker, "Call me Emmett" Bregman. That discussion set the stage for multiple attempts by Emmett to capture the reality of the base, while various base personnel did their best to give him anything but.

The main question, though, is what was the purpose of this episode? It was nice and lighthearted but with very little content, and if it was meant to show the audience the everyday life of the S.G.C. then it missed the mark. All too frequently we were looking at the world through Emmett's eyes, and therefore we weren't seeing the truth of these characters. As Hammond commented, cameras "change what they record simply by being there," and this was clearly evident. Daniel and Teal'c were reluctant to give anything away, and Jack avoided any kind of interview whenever possible. Sergeant Davis ("the Chevron Guy") was hilarious in that he was probably telling the whole truth -- but by this stage Emmet thought he was being snowed once again.

If the episode wasn't meant to tell the audience anything new, then what else was there? It's possible the character of Emmett, by presenting him as rather incompetent, unprofessional and even unprincipled, was meant to shine a light on the integrity and the generally honorable way that the S.G.C. staff behave. Emmett's apparent inability to ask coherent questions of his interviewees made me wonder where the Defense Department had dragged him up from. His flirting with Janet was unprofessional, and his lying to Janet in order to get hold of Jack's medical records was disgraceful. This was a man who, in among his arguments and borderline rants, seemed to think that it was his job to get to the truth (or at least, at the scandal) at any cost, even going so far as expecting Daniel to record "action" off-world rather than defend his team and do his job.

However, if neither of these were the purpose of the episode, then the only option left is to just enjoy the good parts of the story and try not to worry about the lack of a main plot.

And there was plenty to enjoy here. So many individual character moments had me laughing that the overall feeling at the end of the 60 minutes was of an hour in the company of friends. Teal'c refusing to speak in his interview, Siler acting as a test dummy, Daniel getting the camera crew to chase him down the corridor, Sam being unexpectedly camera-shy ... it went on and on.

In terms of camera work, a great balance was struck. The raw picture and sound quality in the scenes we saw through Emmett's camera were unrefined enough for it to be completely clear when it was Emmett-cam and when we were seeing the "true" S.G.C. and "true" events. There was no slipping into uncontrolled and shaky vision unless it specifically added to the story -- a nice touch.

In addition, the absence of background music in a lot of scenes added to the Emmett-cam atmosphere, both by letting a tad more realism creep into the episode and by allowing the audience to make their own minds up about the meaning of a scene without being "guided" by musical cues (which at times can seem rather more like a melodious sledgehammer than support for the story).

Having been given limited team interaction this season, it was wonderful to see four people working together, bantering, obviously relaxed in one another's company, a well-oiled machine. Of course, I'm talking about SG-13. What a breath of fresh air they were! I would love to see them again. Sadly, their presence was a reminder of what we're missing this season in terms of team interaction between the members of SG-1, something we again only got in fragments here: Sam and Teal'c, Daniel and Sam, Jack and Sam.

On the downside, there were some oddities in "Heroes." Sam gushing about Jack, saying that he's "given more of himself for this program than any man has given for, well anything I can imagine" was a severe case of hero-worship run amok. What exactly has Jack given up for the program, other than his extremely early retirement? No wonder Emmett pounced on that comment and asked an extremely inappropriate question. Also, back in Season Six's "Nightwalkers," Sam seemed perfectly able to read Goa'uld so why did she need Daniel to translate the information from the probe for her?

Oddities aside, "Heroes, Part 1" was full of wonderful snippets, if not a terribly coherent story. Hammond's determination to protect his people from this politically-motivated intrusion was admirable and nothing less than we'd expect from the general. The sparks that flew between Jack and Kinsey were spectacular and it was noteworthy to see just what it would take to get Jack to perform for the Emmett-cam. And SG-13 ... *sigh*.

It's been mentioned that "Heroes" was originally a single episode that was expanded because it ran long. If so, that would explain a great deal about the first part's lack of purpose, as the actual story could have happened in about six minutes. Just as something was finally about to happen, the show was over and we have to wait until next week to get into what must surely be the meat of this story. I can only hope it's worth the wait.