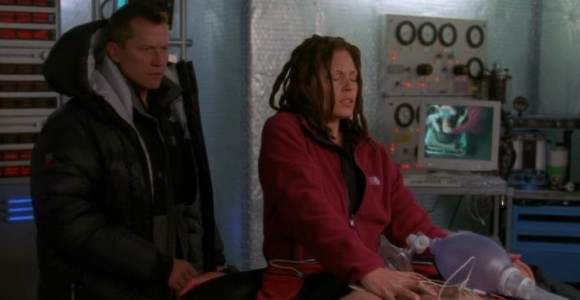 SG-1 investigates the discovery of a woman frozen in the ice in Antarctica, who may be a link to the gate builders. A mysterious disease threatens to kill everyone at the research base.

In the frozen wilderness of Antarctica, a trio of scientists man a small U.S. research base. The base was established four years ago, at the site where Earth's second Stargate was discovered in an underground cavern ("Solitudes"). The team has since uncovered two frozen Jaffa, trapped there sometime within the last 2,000 years or so. But now, they make a stunning new discovery: a young woman, frozen in the ice, and perfectly preserved.

SG-1 travels to Antarctica to participate, along with Dr. Janet Fraiser, and work with Dr. Francine Michaels and her team to begin thawing out the woman – named "Ayiana" by Michaels.

A tissue sample shows that Ayiana's cells haven't even disintegrated. And when Dr. Fraiser shines a light in Ayiana's eyes, her pupil dilates – a cortical response. Astonished, they hook her up to an E.E.G. and find brain activity. Ayiana is alive.

The team works quickly to thaw her out and resuscitate her, and Ayiana's own body – which has amazing healing abilities – kicks in to help. Her heart begins to beat, and she even regains consciousness. The doctors are dumbfounded that such a thing is even possible.

Even more startling are the implications Ayiana has for the origins of the human species. Samples from the vein of ice where she was discovered show that she is at least 3 million years old, possibly much older. She was probably around when the Antarctic Stargate was still in use – as long as 50 million years ago, when the Antarctic plate wasn't at the south pole and wasn't covered by a glacier. Though she is essentially human, Ayiana predates the human race by millions of years.

Carter and Fraiser consider a new theory: perhaps our evolution isn't the first time that human evolution has occurred on Earth. Ayiana herself could be one of the Ancients, the race that invented the Stargates ("The Fifth Race"). Fraiser reveals that her brain patterns show similarities to both Cassandra's, when she was subject to Nirrti's genetic experiments to create an advanced human ("Rite of Passage"), and Colonel O'Neill's, when he had the library of the Ancients downloaded into his brain ("The Fifth Race").

Ayiana is, in short, another example of the evolutionary potential of human beings.

Jonas tries to communicate with her, and meets with limited success. Ayiana is a bit scared, and doesn't speak English – but she learns to understand what he is saying very quickly.

Soon, however, Dr. Michaels collapses. She has contracted a disease, probably carried by Ayiana. It attacks the brain in a way similar to cerebral spinal meningitis, according to Dr. Fraiser, and is fatal within a few days.

Dr. Woods and Dr. Osbourne have also been exposed, and are lost in a storm outside. Osbourne finds his way back to the research base, and O'Neill and Teal'c head out to find Woods in the sub-zero wilderness. After a lengthy search, they find him and bring him back.

He is near death as Dr. Fraiser and the others try to save his life. Ayiana steps forward and places her hands on his chest, and Woods is restored to perfect health. Her healing powers, it seems, are not limited to herself.

At Jonas' request, Ayiana is willing to try and help Dr. Michaels and Dr. Osbourne as well. She heals them both of the disease, though each time she is severely weakened. And now, they discover, O'Neill, Carter, Jonas and Fraiser have also contracted the mysterious disease.

The base is quarantined, and it is too dangerous for Ayiana to try and heal anyone else. Her white blood cell count is dangerously low. But when the team goes to sleep for the night, Ayiana sneaks into the barracks room and begins to heal them. They later find her, collapsed on the floor. She has managed to save everyone in the base from the disease – except Colonel O'Neill.

A disease control team soon arrives, and Ayiana and O'Neill are placed into quarantine units and transported back to the S.G.C. Jack lays dying, and Jonas goes to speak with Ayiana. He encourages her to get better – not only so that she can save O'Neill, but because they want her to live. "Sorry," she says softly, and dies.

The Colonel is left with few options. He is past the stage where the Goa'uld healing device can help him. Thoran arrives from the Tok'ra, and tells the team that they have a symbiote who needs a new host. Kanan's previous host was badly injured while on an undercover mission, and died before he could divulge what the Tok'ra believe to be vital intelligence.

Major Carter relays the option to Jack. The symbiote could save his life, and is willing to leave him after a new host is found – or even to sacrifice itself, if a new host can't be found within a reasonable amount of time. Jack's response is cutting: "Over my dead body."

Sam explains that it's the only way he can survive, and that the symbiote also has information vital to the Tok'ra. Blending with it would give the Tok'ra an opportunity to learn it. O'Neill agrees, and is sent through the Stargate in a quarantine unit to meet his fate.