Message In a Bottle 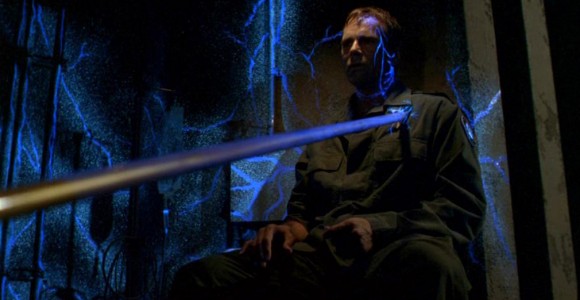 SG-1 discovers an ancient artifact that takes the S.G.C. hostage, infecting Colonel O'Neill with the remnants of a long-dead alien species.

SG-1 decides to remove an artifact from a world where the civilization has been extinct for some 100,000 years. They bring the orb back to Earth to be studied – and study it they do. Carter and Jackson work through the night studying the strange object and mapping the intricate characters printed on the outside surface (the equivalent of 1,000 pages of text).

But as SG-1 is about to leave for its next assignment, the device fluctuates. It's internal temperature begins to climb rapidly, and the radiation it gives off increases many times over. Believing it to be building to a critical mass, O'Neill and Teal'c grab the device and move to throw it through the Stargate back to its planet of origin. Before they can reach the Stargate, the device shoots spikes out to implant itself in the Gate Room. One pierces O'Neill's shoulder, pinning him to the concrete wall.

Dr. Fraiser soon discovers that the device has unleashed an alien virus, an infection that attacks flesh, clothing, even concrete and electrical components. All of the S.G.C. becomes infected as the virus grows exponentially – thanks in part to Teal'c effort to free O'Neill by shooting the orb with a staff weapon, thus providing it with energy.

General Hammond is forced to institute a level four quarantine. The wildfire initiative begins an automatic self-destruct sequence for the complex, to keep the contamination from spreading beyond Cheyenne Mountain. But Carter has determined that the organism feeds on energy – such as the staff weapon blast – and a self-destruct would only feed it enough to allow it to cover the whole Earth. As the two move to shut down the sequence, they find that the organism has taken over the computers and will not allow them to shut it down.

When it comes to mature, the alien organism speaks through Colonel O'Neill, still stuck to the concrete wall of the gate room by a metal pole from the orb. They tell the S.G.C. that they are the remains of an alien race – when their world began to die, the aliens preserved themselves within the device, which was programmed to activate upon detecting a habitable atmosphere. The aliens had hoped that, one day, someone would come along and take them through the Stargate.

Hammond and the team negotiate with the aliens to send them to a primordial world with no life, where they can thrive. The aliens release O'Neill and go through the Stargate.