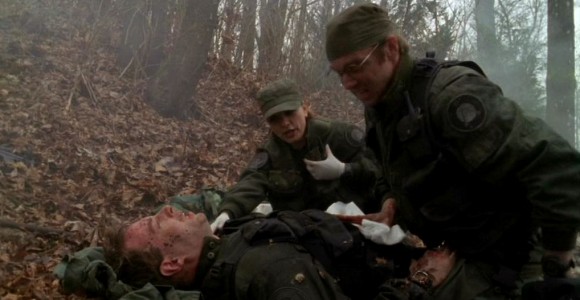 SG-1 is called into action while a film crew is documenting the Stargate program, but the S.G.C. comes under investigation after the mission goes terribly wrong.

Once in a long while, television viewers are treated to a story that is not just a great episode of a particular TV show, but a terrific television episode in general. "Heroes, Part 2," timely and moving, is such a story.

The death of a beloved character is always a controversial thing, especially when the death is written in such a way that disallows any obvious loopholes for changes of heart on the part of the writers. Although the wisdom of this decision could be called into question now that an eighth season looms in the future, the departure of Janet Fraiser was written and executed in such a way that it honors not only a much-loved character but those real people who, in a way, she represents.

"Heroes, Part 2" was intense and emotional, with stand-out performances from all the major players, but especially Amanda Tapping and Michael Shanks. The quiet, subtle actions of Sam's silent tears in front of her laptop and Daniel's vigil in a darkened corner of the infirmary were subtle yet powerful ways of driving home the enormity of their loss.

Emmett Bregman, the sympathetic antagonist from Part 1, transforms into a frustrated seeker of truth, sometimes crossing the line in his quest, but nevertheless exposing the episode's essential questions. What is the place of the media in the military? What should be shared with all; what should be kept secret? What is the best way to remember those lost in the line of duty, to hold up and celebrate the lives, rather than the deaths, of those we care about? In the end, despite his urging for Daniel to share what he knows, he answers some of those questions himself in a way so sensitive and considerate that even General Hammond cannot find fault in it. In the span of these two episodes, Bregman makes a fascinating evolution from a thorn in the side of the S.G.C. to an ally and even a friend.

The attempted deception regarding who the S.G.C. would lose was partly successful, depending on the viewers, ah, devotion to the show. Those in fandom who had heard the sly comments and tacit admissions from cast and crew knew that it was Janet who was the casualty, not Jack; the unanswered question was whether or not Wells would live to see his child's birth. However, to the average viewer there was some mystery, especially after the way that Sci-Fi advertised the episode. My brother, who watches Stargate now and then but isn't involved in fandom, told me, "I knew it wasn't going to be Jack, but I had no idea it was going to be Fraiser."

Perhaps more than anything, a death like Janet's -- occurring in the heat of battle in a situation where she was only doing her job, coming unexpectedly after such a lighthearted and irreverent episode as "Heroes, Part 1" -- serves to remind us that tragedy can come at any time. That's a stirring and poignant message, especially when a character is killed without half-measures or the intervention of ascended, otherworldly beings.

The direction of this episode was quietly brilliant and full of standout scenes. The darkened, silent infirmary with a single bed, lit only by a light from above, is a simple, exquisite image that haunts the mind.

It still remains to be seen how Stargate, now blessed with another season, deals with the absence of one of its few recurring minor characters, especially after Jacob and the Tok'ra's assumed absence after the events in "Death Knell" and Bra'tac's advanced age. When will we see another character step in to take the role of the S.G.C.'s top medical official, and how will the other characters react? Will we see or hear of Cassie and how she is dealing with being orphaned now a second time?

Several members of the cast and crew of Stargate have identified this episode as the best they have ever done. There is nothing more that can be said but simply -- it's the truth.

Having wondered last week about the purpose of the first half of this two-parter, the purpose of the second half is just as confusing. At first sight it appears that "Heroes" is intended to show the audience just how much the members of the S.G.C. sacrifice to keep the planet safe from powerful enemies. Of course, we already know about the sacrifice -- the heroism oozes from the pores of each and every episode, and we've already seen many people die (including a whole episode of Daniel in agony as his body liquefied) -- so it's a little mystifying that the writers would think we'd need it to be spelled out in the televisual equivalent of words of very few syllables.

Dr. Janet Fraiser is dead. You'd be forgiven for thinking that her death had a point, but I'm not sure it did. Did we see the danger to her? Not really. Did we see much of her at all? Er, no. Instead, we were presented with a poor attempt at misdirection while the writers tried to make us think it was Jack who was dead. Jack. Didn't they trust that the loss of Janet would be a big enough misery to thrust onto their audience? What were the audience expected to feel once they discovered that Jack wasn't the one that was dead? Relief? Surely not. While we're busy feeling relief, we wouldn't be upset that Janet is dead.

Of course, we didn't believe Jack was dead for a second, and perhaps they knew we wouldn't. But if that was case, we wouldn't share the emotion that SG-1 (and other characters) were feeling because we'd be trying to figure out who was dead. Was it a character we liked? Did we care they'd died? Was it worth wasting our emotion if the person who'd been killed was someone we weren't all that interested in anyway? No, of course not.

There was just so much missing that needed to be included in this episode. It's rather frustrating, because the potential was enormous. I'm not sure where the fault lies, either. Maybe the important scenes weren't written, or maybe they were written and were edited out. Where were the scenes showing SG-1 gathering together as a team to mourn and comfort? Where were the scenes of Janet? Where were the scenes where Daniel, Teal'c, and Hammond visited Jack in the infirmary? Why didn't Sam seek out Daniel to ask what happened to her best friend in her final moments? Where was Cassie

Teal'c (yet again) was barely in this episode, as was Jack. With Teal'c and Daniel's relationship this season, I'm stymied as to why there was no scene with the two of them. Were all of these scenes simply not written, or were they cut out?

"Heroes" bothers me. And if I were scoring this episode based on the writing and editing, it would get a failing grade. However, that's not the full story, and this is where the problem of the final grade comes in. The acting was exceptional, particularly from Don S. Davis, Michael Shanks, Amanda Tapping and the guest stars. In that respect, very few previous episodes live up to this standard. Everyone raised their game.

There were islands of brilliance. I loved Teal'c's idea for the eulogy. The memorial service was emotional and suitably sombre. Seeing Sam crying in the corridor was shocking. The scene where Hammond asked Daniel to hand over the tape of Janet's death was a fascinating insight into the way Hammond feels about Daniel by having the kind of conversation he'd ordinarily only have with Jack -- sharing his thoughts about Emmett and about the decisions Hammond is being forced into. There was a really nice use of camerawork in the interviews with Woolsey. But the highlight of the episode for me was the scene between Daniel and Emmett in the dimly lit infirmary, where Michael Shanks' use of emotion was perfect, absolutely perfect.

In the midst of the deliberate confusion over who had died, we were given Emmett practicing his skills at emotional manipulation on anyone and everyone in the vicinity. Woolsey appeared out of nowhere to be confrontational, threatening, and then confrontational all over again. And there was Emmett at the beginning of the episode running through raw interview footage which he pronounced to be "unbelievably boring." Too true.

And now there's also the issue of the elephant that's been sitting in the room ever since Sam's admission in "Grace" -- was her hug with Jack just a friend being glad another friend is alive, or was is meant to be something more? There was simply too much unnecessary plot in "Heroes."

The overall impression was of something disjointed and without focus. "Heroes" could have been so very powerful. It wasn't. So where does that leave me with my grading? I'm deeply disappointed by the story, and whether that's down to the writing or editing I simply don't know. But, on the other hand, the acting was a joy to watch -- the actors put their hearts into this. I simply can't average out my impressions and give an overall score, as it would have to be mediocre.

Instead, I'll focus on the great things about this episode: the acting, sound, lighting, directing, and so on. If they could keep up that quality every week, I'd be extremely impressed.