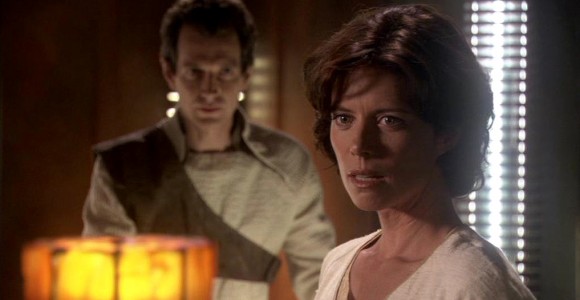 A woman is found in suspended animation in Atlantis, and the team is shocked to see that it is Dr. Weir herself, who tells them of her trip 10,000 years into the city's past.

I'm all for doing a cautious and calm review. Most of the time. There are other times when the episode calls that I fangirl over it like a 13-year-old at a N-SYNC concert. "Before I Sleep" is such an episode.

Granted, I went into this episode with incredibly high expectations. Time travel and alternate reality stories are big on my list, and even without spoilers, the story and the way it could play out sounded just so damn cool. That said, "Before I Sleep" fulfilled my expectations, albeit in a completely different way than I expected.

"Before I Sleep" is written by first time Stargate writer Carl Binder, and the way the story is set up and then slowly revealed is the main strength of the episode. As elder Elizabeth Weir tells her version of the team's arrival in the lost city in "Rising," there are flashbacks. I dreaded for a moment that the episode was relying on clips, until the realization that this flashback was very much different than the series premiere we know.

The "Rising" clips and the new flashbacks blend together very well, presenting a universe only slightly different ... but with disastrous results. It's interesting to note that in both realities, Colonel Sumner dies before anyone else.

What makes "Before I Sleep" an excellent episode, however, is not only the writing, but the complete package. Every scene is visually interesting and telling in someway, such as the shot of the older Weir in the background when Elizabeth is talking about what information this Ancient woman can give them, and the transition centered around her eyes in between the older Weir telling the story and the flashback of her waking up in Atlantis.

It must have also been a challenge -- even for veteran Stargate director Andy Mikita -- to work the visual tricks that were need when Torri Higginson was playing both Weirs in the same scene. It's done subtlety enough so that the viewer isn't distracted from what's going on.

Another element of the episode that added up was the makeup used on Torri Higginson to create the alternate timeline Weir. Again, it's well done enough as to not distract us from the story, and adds to what our own Elizabeth Weir is thinking and feeling about her own mortality. Of course, the makeup would mean nothing if the actress herself didn't pull off playing two "different" characters with such success.

The focus of "Before I Sleep" is twofold, introducing a new layer to the Atlantis story and to Elizabeth Weir as a character. The combination of the larger story and the personal makes the episode all the more powerful. The episode is smartly book-ended by Weir standing on the balcony. The focus is clearly on her. The older Weir has some sage advice for the younger: Trust yourself. She is burdened with leading an expedition in another galaxy, cut off from Earth, where not everyone gets along. To the viewer, we've seen a lot of her as a strong leader, but not so much of her personal side. Fleshing out her character is this manner is an odd way to go about it, but it works out well. It's both similar to and different from Sam's reaction to talking to the alternate version of herself in SG-1's "Point of View."

And the older Weir is at peace with her choice because she knows she has given her younger, different self a chance at exploring the Pegasus Galaxy. The younger Weir realizes the chance they've all been given, and at the end, without much fuss in the script, is trying to not be so hard on herself.

"Before I Sleep" leaves viewers with only a few questions. How was it that Weir was the only one to be saved after the Puddle Jumper was shot down into the ocean? Maybe she was the only one who survived the crash in the first place, but that past is kind of glossed over. And more interestingly, how did Sheppard know it was her birthday?

For an idea that manages to kill off every single character in a single episode, it's possibly the best episode of the season.