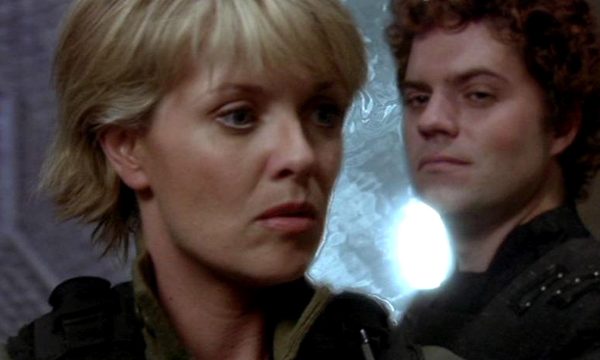 Season Eight of Stargate SG-1 brought new leadership at Stargate Command, a power grab from a shifty organization on Earth, and an epic confrontation between the Goa’uld and the Replicators that would leave our galaxy changed forever. So which moments were your favorites?

This month Stargate fans are enjoying the eighth season of SG-1, as part of the worldwide Stargate Rewatch event! Earlier this month we asked fans to nominate their favorite episodes, character moments, guest stars, and more from SG-1 Season Eight. The most nominated in each category make up our official awards ballot, which you can vote on below.

You don’t have to be a Rewatch participant to vote, but please vote only once! Voting will close on March 31, and we’ll announce the winners for the month before heading into Season Nine in April. Come back then to nominate your favorites from that season!

Season Eight is my favorite season. It just has so many great episodes. I think of all of them, Prometheus Unbound has to be my favorite. I love episodes that feature Prometheus or any other Earth ship, and this episode with Vala was awesome. The New Order episodes are great. We see the Goa’uld coming to us scared after our unexpected and stunning defeat of Anubis, the Asgard needing our help once again, and O’Neill developing the disruptor weapon and using it to save the Asgard. Reckoning has to be one of the best two-episodes in all of Stargate, and… Read more »

But ‘Threads’ will win because the Shippers won’t vote for anything else.

This was a great season, even though Jack O’Neill isn’t as prevalent as he was in the earlier seasons, due to Richard Dean Anderson takings reduced part in the season. I really liked “Lockdown,” especially when Anubis claims Jack’s body to go through the Gate, but is coaxed out of Jack by Vaselov. Jack’s “I’m ok…ish!” was very much a Jack line. It was even funnier when he shot Daniel and no one was willing to admit it. I also really liked Avatar, especially the end when Daniel gets into the game to help save Teal’c, who is slowly giving… Read more »

best stargate season. period. it had three season finales. one after another. puting jack in charge of the sgc was pretty smooth. it allowed them to do lots of new fresh stories they could not do before. the reckoning part 2 is sg1 in its prime. that episode almost wins every category. best team moment? fishing scene without a doubt. only drawback was the recap episode. i am not a fan of these kinds of episodes. but it was still pretty good. i would take that episode over any filler episode from atlantis season 4 or 5.

I only wish SGA got to end their series this way!

By the way, regarding the re-watch, at this point we should be watching one SG-1 episode and one Atlantis episode… u.u

Currently watching Dr. Who’s “The time Warrior” with John Pertwee. Very dated but still fun to watch. After this I will top off with SG: Season 8’s Moebius”. Yes its time travel night for me.

@fer++
I agree with you- Torri actually was my choice on the nominating forum board as ‘Best Guest Star’ for Season 8. She not only stuck the Weir character right on the money (as opposed to Jessica), but she went on to portray, IMO, one of the most remarkable characters in all of Stargate itself.

Sadly, it seems I was one of the very few (if not the *only* one) who dared to put Torri up for it…