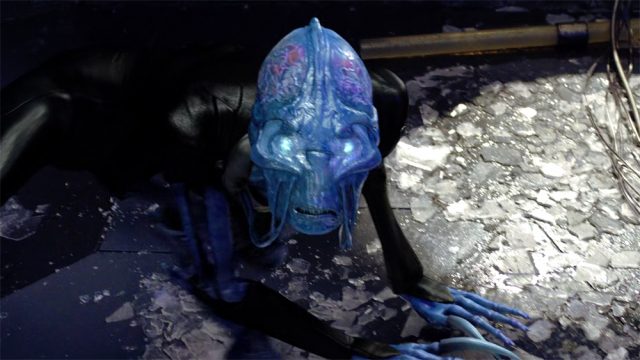 This week Sara’s first time watching SGU brings her to the emotional mid-season finale “Justice,” followed by the later mid-season premiere “Space!” Remember how you felt the first time you saw those menacing looking blue aliens (which the show’s writers say were to be called the “Nakai”), and Dr. Rush held in a tank full of water? 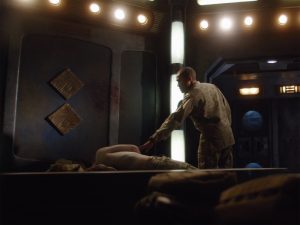 Ronald Greer is firmly digging himself a nice little house in my heart. The more we find out about him, the more I like him. He may be one of those slow-burn, ultimately my favorite character guys. Greer is showing more and more personality as the show goes on. Him tricking the scientists with the nasty beet-colored sweet potato was a great opening scene. To follow that up with him finding Spencer’s body and his calm assessment of the situation was a nice juxtaposition. The fact that Camille and Young both assumed he had died by suicide and Greer had the presence of mind to have already searched for a weapon (and concluded Spencer’s death was evidently a murder) showed that this isn’t the first time he has had to deal with this type of situation.

As much as I dumped on Colonel Young last episode, I do like him as a leader. The fact that he rules himself a possible suspect because he can’t prove his own alibi ranks up there with him taking himself out of the lottery for the escape pod when they thought the Destiny was going to be obliterated by the STAR OF DOOOOOOOM. Gray Jedi or not, he’s a good leader. He’s a Colonel for good reason.

When they found the gun in Young’s room my mind immediately went to Jack O’Neill’s very un-O’Neill plan and his insistence that he would put Telford in charge of the Destiny if Young didn’t follow orders. It makes me wonder if there is a mole on board … and if so, who is it? The obvious guy would be Rush, but he’s too arrogant to play games like this. Spencer would have been a good candidate as a suspect, except, well, he’s the dead guy. 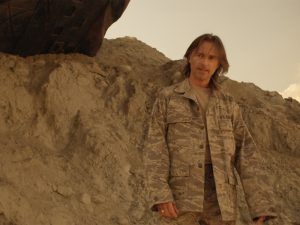 Nicholas Rush is confronted by the Colonel, left for dead on a desolate world.

I like that for the trial Young was smart enough and calculating enough to get Chloe to be his defense. His worry about it appearing to be the military vs. the civilians is a valid one. Though, at this point, the I.O.A. may as well be the military.

During the interrogation phase of the trial when T.J. was on the stand it was nice to see the show address the obvious lack of proper forensics equipment to easily address the situation at hand. They can’t simply test Spencer’s hand for gunshot residue. But their talk about blood spatter is making me worry that Greer moved the gun in an attempt to protect Spencer. Did he plant it in Young’s room because he figured no one would look there?

I could write a thousand words on the last ten minutes of this episode alone. The twist of Rush being the one to try and set up Young, and then Young retaliating by marooning Rush on a desolate planet with only a crashed alien ship for company …

I knew they were both calculating. But I thought they were both too arrogant to really get their hands dirty. Their fight all happened so fast, and so succinctly, that I feel like someone should make a reaction video to fully communicate how much of a mind-blowing situation this was. My jaw was on the floor at the end credits.

Young, Rush … welcome to the Dark Side. 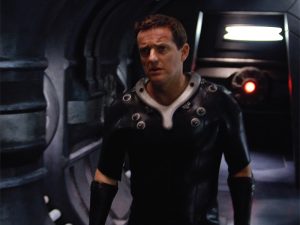 Thanks to the communication stones, Young finds himself an unwitting spy on board an alien ship.

This episode just jumped straight to the point. Camille suspects that Colonel Young isn’t telling the truth about what happened to Rush. She confronts him point blank and he just brushes her off. Young has communication stone time set up to go back to Earth and instead he … switches places with an alien!?

Eli seems to be the only one reacting properly to this space battle. Everyone else is so chill and ready for battle stations. I suppose that, being military, they should be ready at the drop of a hat. But Chloe was so calm and curious. She practically walked into the abduction beam.

The good news is, she reacted properly when she woke up in the fish tank. I guess the aliens thought the fish tank was appropriate since humans are mostly water? I feel like I need to make an Aquaman joke here, but before one fully forms the show blows my mind for the second episode in a row.

They. Have. Fracking. Rush. The CGI BlueBugs have Rush.

I knew Rush was going to have to come back, but I did not see him coming back this way. I must give props where props are due. I am not used to a show surprising me with plot twists. SGU has gotten me almost every time.

And this is also the most Stargate-y episode so far. We have hostile aliens. We have space battles. We have explosions. 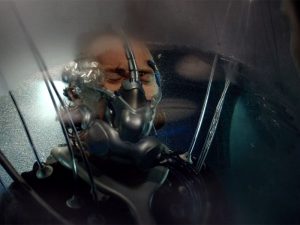 Rush is held inside a tank of fluid on board the alien vessel.

But Young is a very un-Stargate-y C.O. in this episode. The fact that he is so willing to sacrifice Rush and Chloe without hesitation keeps him at Number 5 in the “Top C.O.s of Stargate” list. It does set him apart from O’Neill, Sheppard, Mitchell, and Carter, but not in a good way. Young is really embracing his Dark Side, and we haven’t had a C.O. go this far before.

Something un-Stargate-y that SGU is doing that I really like is their use of montage to cover what all the characters are doing. These succinctly and quietly convey their emotional states and tease at what’s to come.

Of course, this episode’s nice little montage is abruptly ended by Camille and Rush conspiring against Colonel Young. It’s nice to see Rush not being a lone wolf jerk wad, but now becoming part of a team. We know Rush has been a suspicious character from the get-go, but seeing Camille slowly move that way — and to see her motivation — makes Rush’s actions less jarring, less evil simply for the sake of mustache twirling. He can share her motivation and be less one-dimensional that way.

The depth that the writers are giving these characters is awesome. They are breaking the Stargate mold and giving us a C.O. that isn’t 100 percent “good guy,” as well as a mutiny within the main team. The character-driven drama on this show has really sucked me in.

In the Next Installment: The mutiny on board Destiny continues with “Divided”, and the crew goes planet-side in “Faith.” Stay tuned!