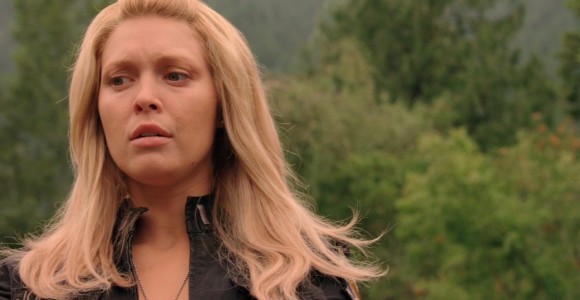 The crew finds a idyllic planet when Destiny stops without its countdown clock running, tempting some crew members to stay permanently.

The fight for survival aboard Destiny has made everyone weary. Lieutenants Tamara Johansen ("T.J.") and Matthew Scott force themselves to begin another day. Camille Wray has lost her appetite. Still recovering from surgery ("Divided"), Dr. Nicholas Rush staggers into the Control Room to resume work. Adam Brody and Dr. Lisa Park take on the challenge of repairing Destiny's damaged shuttle, the one Senator Armstrong died in ("Air, Part 2").

After the attempted civilian coup ("Divided"), Colonel Everett Young has ordered his personnel to make a special effort to be more accommodating. Spotting Rush in the Control Room, Young begins the effort to mend his strained relationship with the man.

Suddenly, Destiny drops out of F.T.L. flight. Surprisingly, the countdown clock does not begin, nor does the Stargate dial out. According to charts they are in empty space. But Brody, still in the damaged shuttle, reports the presence of a star. Its gravity well disrupted Destiny's propulsion, forcing it from F.T.L. flight. Once they move through a parabolic course around the star, Destiny will be on its way again – in about four weeks' time.

This yellow dwarf star (similar to Earth's sun) has one planet orbiting it. Rush is hard-pressed to explain how it can be there; the Ancient ships traveling ahead of Destiny send back sensor data, but when they passed by here there was no star and no planet. Yet here it is, with a viable atmosphere and vegetative life. Scott, Johansen, MSgt. Ronald Greer, Dr. Caine, and several marines investigate. The water is safe. Greer "tests" a fruit by biting into it. Loaded with samples to take back to Destiny, the shuttle flies over the area and the group discovers a 2,000-foot-high obelisk standing in an extinct volcanic caldera.

Rush believes the makers of the obelisk actually created the star and the planet after the Ancients' Stargate-seeding ship passed through this region. Because Destiny's course correction will take so long to execute, there is a window during which the shuttle could return to the planet and harvest supplies. A group will be able to spend several weeks camping on the planet and collecting food and water, returning to the ship when Destiny loops back around the star to exit the system.

Under Scott's command, Greer, T.J., Caine, Airman Dunning, Chloe Armstrong, Dr. Dale Volker, and several others return to the planet. It takes some time to overcome the rift between civilians and military personnel, but in a "spirit of cooperation" they spend the next month gathering specimens, collecting food, and starting to enjoying life again. T.J. is particularly comforted by the chance to be off the dark and aged ship, under a warm sun and in the fresh air again. She finds a waterfall which reminds her of her childhood.

Chloe and Scott begin to mend the damage to their relationship. Volker studies the obelisk. And Caine wonders if finding the planet was a miracle – a lifeline from God. Perhaps the alien race who built the obelisk, who are capable of engineering a solar system, will return. The aliens could be their best chance of getting back to Earth one day.

Back on Destiny, Brody and Park continue working on the shuttle. A team headed by Lt. Vanessa James explores more of Destiny. They locate a store room with a number of crates. One holds an intriguing device James suggests looks like a "robot." Young orders it re-crated until Rush can study it. Eli Wallace worries about those on the planet, while Wray decides she made the wrong choice in not going with them.

A few days before the shuttle's return, the obelisk projects a beam of light straight into space. Despite the possibility this may summon the creators of the star system, many on the planet are determined to remain behind when Destiny leaves. Some believe Caine is right, that the planet is a lifeline. Others just want to stay in what is clearly a healthier living environment. And T.J. has a special reason: she is pregnant with Colonel Young's baby, a result of their affair that ended before they left Icarus Base several months ago.

Scott radios to the Colonel to inform him that 11 people, including T.J., Chloe, and himself, want to remain on the planet. (Scott believes he must stay to look out for the others.) Young and Rush are livid. Young feels betrayed; Rush worries about the effects of losing so many capable people. But Camille argues that they have the right to make a choice about their own fate, even as Young is adamant that no military personnel will remain behind. Mindful of the recent coup attempt, he finds a compromise.

Although repairs on the damaged shuttle aren't nearly complete, Young flies it to the planet's surface. He offers the people there a deal: He will leave the shuttle for those civilians who wish to stay. It will never be able to break orbit, but should provide power and shelter during the coming winter. In return, all military personnel must return to Destiny – including Lts. Scott and Johansen.

Young reminds them that Destiny is their only way home. Caine counters with his belief that staying on this idyllic planet is their destiny. As people make their final choice, T.J., Chloe and Scott are the last to decide. When T.J. makes the heart-breaking decision to obey orders, Scott and Chloe return with her to the ship in time for it to jump back to F.T.L.

Colonel Young makes his way to Rush's quarters. Awkwardly, he jokes that he is sorry Rush didn't meet those responsible for the star system – someone with whom the brilliant scientist could hold a decent conversation. Rush, whittling chess pieces, is uncertain how to respond. Young goes further out on the olive branch and tells Rush that he likes chess, too.

Scott stops Young on his way to the mess hall. Confused and upset, he asks the Colonel if they all might have let go of a lifeline by not staying. Young truthfully answers that no one can know. He proceeds into the mess, where everyone is clearly enjoying a feast of foods brought back. Young joins in, oblivious to T.J.'s despair.

Fearful of the future and perhaps more isolated than ever, T.J. sits in the infirmary crying, her hands protectively covering the baby she carries.