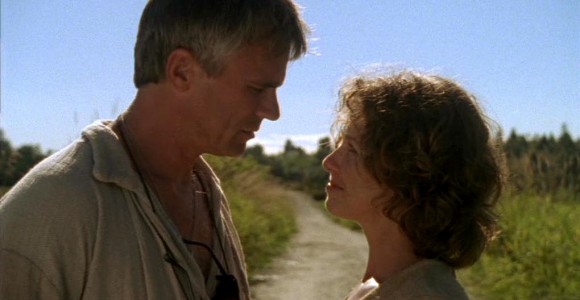 After a meteor strike buries the Stargate, O'Neill finds himself stranded on a planet with no hope of rescue.

SG-1 has discovered Edora (designated P5C-768), a planet rich in naquadah, the valuable mineral on which Goa'uld technology is based. Beyond this, the planet's small population of villagers are friendly, and most are open to sharing the mineral with Earth.

Before negotiations can be concluded, though, the Edora "fire rain" commences in the atmosphere. Once per year, the planet passes through an asteroid belt, and hundreds of asteroids pass gloriously across the night sky. But every 150 years or so, as the team soon determines, the planet's orbit causes the car-sized rock fragments to enter the atmosphere and impact the surface.

The entire village is in danger as car-sized fragments begin impacting the planet, and SG-1 offers to bring the villagers to Earth until the event concludes. Two-thirds are convinced, and follow Carter, Teal'c, and Jackson through the Stargate. The other third remain behind, believing that SG-1 is trying to steal their land and destroy their way of life.

One of the villagers is a beautiful woman named Laira, and she has taken a liking to Colonel O'Neill. When her son Garan rushes off to take shelter in the caves with his girlfriend, Naytha, Laira and O'Neill go after him. Teal'c and Carter wait at the Stargate for as long as possible, but must finally leap through to escape a huge, fiery meteor that strikes right near the gate itself.

O'Neill discovers that the gate is gone, and presumes it to be destroyed. He is trapped on Edora, and is blamed by some of the villagers for the fact that two-thirds of their people can never return home.

O'Neill refuses to give up hope, and begins to dig each day, in hopes that the Stargate was buried and not destroyed. Meanwhile, Laira has begun to fall in love with him, and accepts him into her home.

On Earth, the event has caused Carter's feelings for O'Neill to begin to surface. She is dedicated to finding a way to rescue him, and assures Dr. Fraiser that her feelings for the colonel will not pose a "problem" for her.

Daniel Jackson contacts the Tollan and the Tok'ra, Earth's two allies capable of interstellar travel, and learn that the Tollan could have a ship to Edora to pick up O'Neill sometime next year. Carter's plan is more ambitious, though: after trying to send a M.A.L.P. probe back to Edora, the team concludes that the meteor strike must have caused the naquadah-rich ground around the gate to heat and liquefy, forming a barrier in front of the gate. Though a wormhole could be established (proving that the gate was not destroyed or completely buried), the probe failed to reach the other side.

Sam proposes building a particle beam generator to fire through the gate at the naquadah cover, similar to the one used against the S.G.C.'s gate iris by the Goa'uld Sokar ("Serpent's Song"). If the cover could be dissolved, then establishing another wormhole should clear out a small cavern.

Carter works for three months before successfully devising a particle beam generator, but her plan is successful. After destroying the false cover and activating the Stargate to create a cavern in the rock, another M.A.L.P. probe is sent. It materializes on the other side, but only sends a brief transmission before being destroyed. Carter concludes that the Edora Stargate has fallen horizontal, and the M.A.L.P. fell back into the event horizon after materializing.

On Edora, Jack has begun to come to terms with the fact that he will never go home again, never see his friends again, never journey through the Stargate or fight against the Goa'uld. He has come to enjoy the simple, village life – and he has fallen in love with Laira. She wishes to marry him, and her village friends agree. Laira even tells Jack that she wishes to have a child by him.

The next morning, O'Neill is content, chopping wood with a newly-made friend. Laira offers to get rid of his old S.G.C. uniform and gear, and O'Neill finally consents. He has embraced his new life, and given up his old one – though part of him will always be tied to that life, he tells Laira.

At the S.G.C., Teal'c has volunteered for the do-or-die mission to gate to Edora and attempt to tunnel to the surface. He has but a few hours of oxygen in which to work, and cannot gate back to Earth should he fail.

As Laira begins to dispose of Jack's items at the river, she hears a transmission come across his two-way radio. It is the voice of Major Carter, radioing to Teal'c before the wormhole disengages. She wrestles with weather or not to tell Jack, fearing that his rescue may be successful. But she does tell him, and he rushes with the device in hand to the Stargate's former location.

Teal'c is but a few feet below him, and the two make radio contact. O'Neill and Laira's son dig frantically, and Jack's face explodes with cathartic joy when he sees the face of his friend.

With Stargate access to Edora restored, Jack is rescued and a naquadah-mining treaty may be established. Carter, moved with emotion, turns away as Jack says goodbye to Laira, promising to return soon. 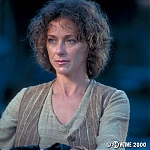 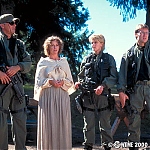