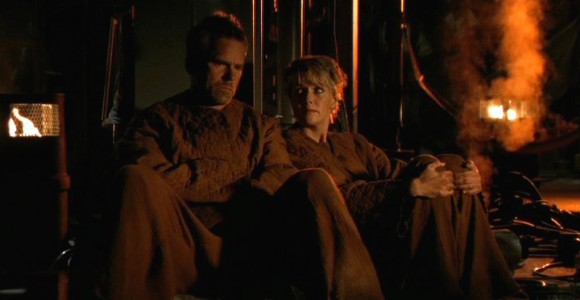 The members of SG-1 are used as forced labor in an underground alien facility after their memories are erased by the ruling elite.

An advanced alien city sits in the middle of a planetary ice age on P3R-118. The elements rage around it, but the city remains protected by a giant bio-dome. Deep underground, the working class maintains the systems that power the great city – though they do not even know it exists.

Four of these workers are familiar: it is SG-1. Colonel Jack O'Neill, Major Samantha Carter and Dr. Daniel Jackson line up for the afternoon meal. Kegan, the young woman who dishes out their food, is not too happy to see Carter. She refuses to give her bread, and a scuffle ensues. Daniel and Jack end up in a fight, but Teal'c grabs the Colonel and tries to stop him. He tries to convince them that they are friends – that all four of them are part of something called "SG-1." Teal'c is dragged away shouting, "We do not belong here!"

The memories of SG-1 have been wiped out – or at least covered by false memories. They know of O'Neill as "Jonah," Carter as "Therra," and Jackson as "Karlan." Teal'c, they believe, is called "Tor."

And while Jack and Sam seem to know each other well, Daniel is estranged to them. He spends his time with Kegan, his friend. Living conditions for the workers are rough, and their days are hard – but they believe it is an honor to serve, that they are helping their people survive an ice age (not altogether untrue).

On Earth, General Hammond is in contact with Administrator Caulder – one of the alien city's local leaders. SG-1 has been missing for many days. Caulder explains that the group had gone out to explore the nearby glacier region, and never returned. Hammond sends an S.G. team, led by Major Griff, to look for them.

Beneath the surface of the planet, Jackson begins to dream about the Stargate and about O'Neill – but cannot figure out what the shimmering circle of water is. Slowly, his memories start to resurface. He believes that Jonah and Therra – and even Tor – may have once been his friends, and that they are suppose to be doing something bigger, something more important. His friend Kegan tries to dissuade him, believing that Carter and O'Neill are only trying to win special treatment from Brenna, the workers' foreman.

But Jackson continues his search for the truth. He realizes that he cannot remember very far into his own past, and finds that strange. He speaks to Teal'c when he returns – but the Jaffa tells him he was night sick and does not know him.

Later, while moving to release the pressure from one of the machines, Teal'c passes out. The pressure rises dramatically, threatening to explode and take out the entire section. Daniel, Jack and Sam work together to save the facility.

Daniel takes the opportunity to try and get to know the two better, and learns that Sam has had the same dream – a dream about the Stargate. They agree to meet after lights out.

In Administrator Caulder's office, Brenna has brought some of Sam's ideas to share with her supervisor. Carter has many good ideas for improving efficiency at the plant. But Caulder isn't interested; he worries that one day, she might make things so efficient that the system does not require workers at all. He is interested only in maintaining power – both literally and figuratively – and keeping the working class subjugated to the people above whom they serve. Sam's ideas are rejected.

Major Griff's team returns to Earth, reporting that no sign of SG-1 was found on the glacier. Beyond that, though, Griff doubts that O'Neill would have ever let his team go out there. If Administrator Caulder said that was the case, he must be lying.

Carter, Jackson and O'Neill continue to slowly remember more and more of their pasts. Sam recalls details about the S.G.C. – names like "SG-1," "D.H.D.," "G.D.O." Jack begins to remember his feelings for Carter, and the two grow closer. Personalities begin to resurface as they continue to dig deeper – expressions, like Jack's "for cryin' out loud," escape. Sam inadvertently refers to O'Neill as "sir."

In a dream, O'Neill remembers seeing the city and speaking with Caulder. He confronted him about the slave labor underground, and refused to recommend trade with this world. Caulder had taken SG-1 and stamped them with new personalities for passing judgment on their way of life.

Brenna is dissatisfied with Caulder's treatment of the workers. Some days later, she reports back again: SG-1 has been seen meeting together late at night, and there is evidence that they are beginning to remember. The memory stamp ordered by Caulder is not keeping its hold. In addition, Teal'c is now dying. He cannot remember kelnorim, the Jaffa meditation process that allows his symbiote to cure him of illness ("Holiday"). Caulder orders O'Neill, Carter and Jackson expelled to the surface, to die in the cold.

General Hammond has very few choices other than breaking off diplomatic relations with the planet. Instead, he orders Griff to draw up plans for a covert search and rescue operation.

Fortunately, the mission is not needed. Brenna, herself a worker, decides to act against Caulder rather than expelling SG-1 to die on the surface. She brings all four of them into her office and tells them that their suspicions about false memories are true. Brenna explains who they really are – but before she can help them to escape the facility, Caulder arrives with two armed guards. He shoots Brenna in the shoulder for her disloyalty, and turns his weapon to SG-1.

Teal'c awakens suddenly and overpowers the guards, and O'Neill grabs Caulder's weapon. Teal'c explains that he undid his bandages (covering his symbiote pouch) in the night. When he realized he was different from everyone else, he began to remember who he really was. He put himself into a deep state of kelnorim through the night, and woke up healed.

Before they escape, O'Neill drags Caulder in front of the workers and tells them the truth – that they are slaves to the city above. To prove it, Jack shoots out a skylight overhead. Instead of ice and snow burying the people, they feel the warm rays of the sun.

Brenna tells SG-1 that their memories will return in time, especially once they are home. They will take her with them to receive treatment for her wound, and promise to relocate the workers to a tropical world they have recently found. Caulder and his people will have to work for themselves for a change.