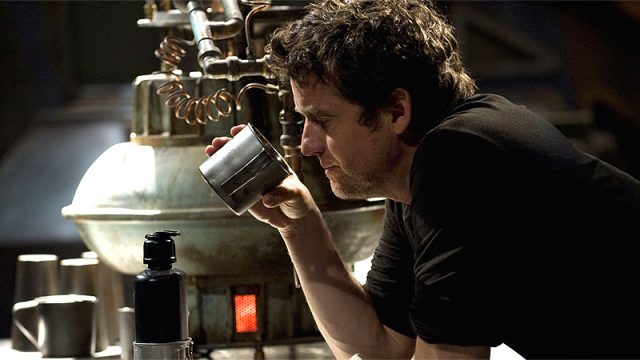 Matthew Scott dreams of another life and Everett Young just might be going crazy, as Stargate Universe newcomer Sara Kehoe continues her journey into the show’s second season! This week she’s arrived at “Cloverdale” and “Trial and Error,” two very different kinds of episodes that showed how SGU was willing to think outside the box in its sophomore year.

Sara’s adventure with the crew of Destiny continues … 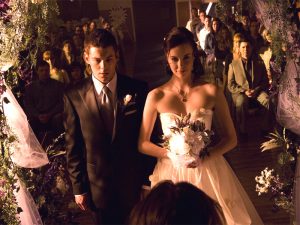 Matt dreams of another life, including his small-town wedding with Chloe.

I love an episode that switches between “realities.” Especially one where our usual cast of characters plays themselves, only as different people. Colonel Young is Matthew Scott’s dad? Eli is Chloe’s brother? It’s fun to see a different dynamic between the actors as they switch back and forth between roles.

I have a feeling that this episode won’t further the “Chloe is turning into an alien” story — but a break from the main storyline, when done well, can really do a lot of help the flow of a season. And, when it’s done well, it can still play an important role in moving the season forward.

I feel like the relationship of the core five in the hallucination (Young, Scott, Eli, Chloe, and Greer) reflects how real-world Scott sees everyone. This makes for an interesting trip into Scott’s psyche –especially the way he treated Vanessa at his bachelor party.

And then Telford shows up as the cop who deals soul-crushing truth bombs. Maybe Scott is starting to lose faith in Young? Is he starting to think Telford may be right? 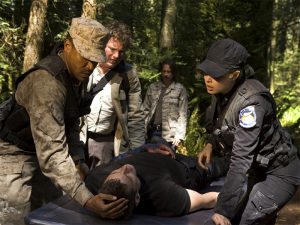 Back in the real world, the team fights to keep Lt. Scott alive.

Or, I’m reading way too much into it because I just can’t find a greater meaning to Rush being the Justice of the Peace for Matt and Chloe’s nuptials.

In the real world, Lt. Scott is in fact infected with plant spores that are slowly taking over his body. He is unconscious, and too infectious to bring back aboard the Destiny. The small away team that was with him when he was infected are fighting back the Plant Monster, trying to save their friend’s life.

Chloe even gets herself infected deliberately, so she can say with him. But I’m betting her Smurf-induced infection will provide some sort of cure for the plant monster spores.

A blood transfusion from Chloe to Scott cures him just in time in the real world, as they get married in the hallucination world.

I have to say: The further I get into the series the more I love Ronald Greer. His using his body to protect Chloe and Scott from the wormhole kawoosh gave me feels. 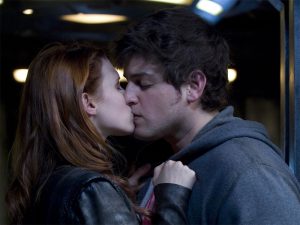 Uh-oh — are there little sparks flying between Eli and Ginn? I don’t know if they can replace my OTP, but we’ll see. At the very least I love seeing Greer playing wingman. Though, with Ginn being Alliance, I am ready for it all to be a setup.

Chloe is now undergoing visible, physical changes from whatever the Smurfs did to her. And they want her back. Now the Smurfs send ships to get Chloe back, and start firing on the Destiny.

With the Destiny blowing up not 10 minutes into the episode … it’s obvious that Colonel Young is having dreams or visions. But because of these visions, Young is focusing on defense and weapons in the real world. As usual, Camille questions his motives and pushes for a deeper explanation than he is willing to give. 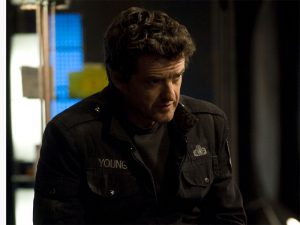 Colonel Young hits a personal low in “Trial and Error.”

Young’s visions are giving him an entirely humorless Window of Opportunity to try and defend the ships against the Smurfs when they really do attack. But by the second vision, Young seems to have some grasp of what’s going on because he steps back to observe what’s happening instead of acting. And afterward, he goes to Camille for help, worried he may be going crazy.

It’s more than we usually get from this crew. Self-awareness, followed by positive action.

As the Colonel is slowly losing it, T.J. tells him about the aliens that took their baby to Planet Eden — and he is having none of it. He’s giving up in general, knowing as it happens that he is going mad.

Turns out the Destiny is running a background simulation program, in order to test Young. The Destiny has decided Lt. Scott should be in charge. And I’m starting to agree with the ship.

In the Next Installment: Destiny finds a derelict alien ship in “The Greater Good,” where Rush is willing to finally open up some secrets. Then, Rush is out for revenge in “Malice.”

“Trial and Error” was the one episode that had the biggest impact on me on rewatching. It has a way of growing on you. I believe it is because there is a lot to absorb and you really have to be committing yourself while watching. Young’s time on Destiny has been one long “bad day”. He’s being undermined by Rush and to some extent, Wray, on board Destiny while being undermined back home by Telford. If you buy my theory that he was just about to go home to work on his marriage before he became stranded by Rush on… Read more »