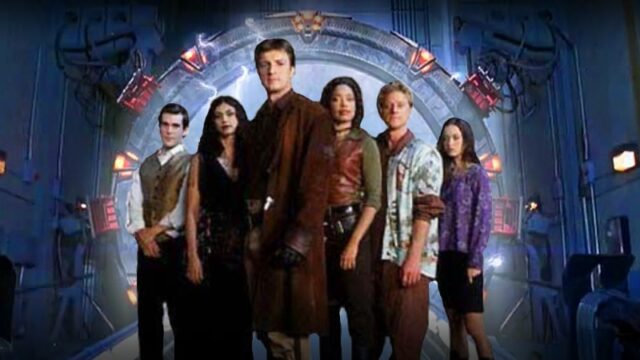 Take my love, take my land,
take me where I cannot stand
I don’t care, I’m still free,
you can’t take the sky from me.

It has been 20 years since Joss Whedon’s sci-fi western masterpiece made its television debut. Firefly premiered on FOX in September 2002, and its abrupt cancellation that fall remains one of the most notorious decisions in network television history.

Of course many of the cast of Firefly went on to stellar careers, and that included several notable turns in another great science fiction franchise: Stargate. One of Serenity‘s crew commanded an SG team out of Cheyenne Mountain. Two more became infamous villains. And one even joined the Atlantis expedition full-time!

Here we are looking at five Firefly cast members (and guest stars) who also appeared in the Stargate franchise. Do you know of anyone we missed?

Let’s make a game of it! How many of these five actors can you name before you scroll down? 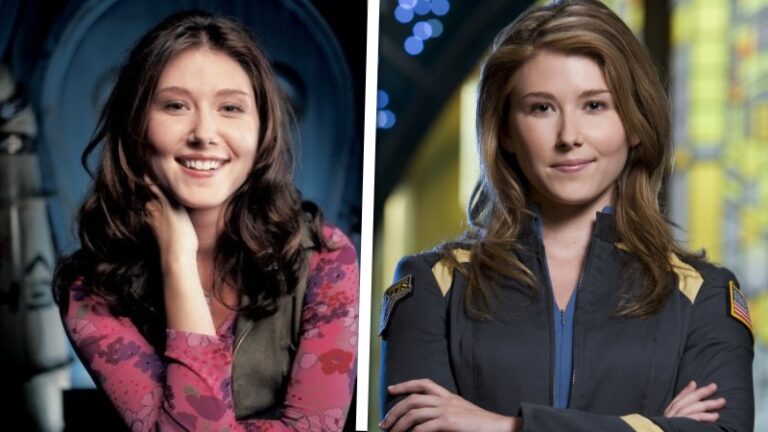 Stargate’s closest family ties with Firefly is none other than Kaylee herself — Serenity‘s mostly innocent but occasionally dirty-minded mechanic. The way to Kaylee’s kind heart was just by helping her keep her engine humming. Or sometimes with a nice, fancy dress. Or strawberries.

After her time on Firefly actress Jewel Staite put in a guest appearance on Stargate Atlantis, though casual viewers probably didn’t recognize her under the heavy prosthetics. She was Ellia, the Wraith girl who the team finds living in secrecy and trying desperately to escape her true nature in Season Two’s “Instinct.”

Ellia didn’t have a happy ending, but the show’s producers knew that the prosthetic disguise meant they had a chance to bring back the actress in another role. After Dr. Carson Beckett (played by Jewel’s long-time friend Paul McGillion) was written off the show Atlantis needed a new doctor — and Jewel was cast as Dr. Keller, a small-town girl from Wisconsin. Jewel made her first appearance in the third season finale before joining Atlantis on a recurring basis for Season Four. Then she was upped to full-time cast member for the show’s fifth and final year, racking up credits for 33 episodes.

Today you can find Jewel starring in the Canadian legal drama Family Law. 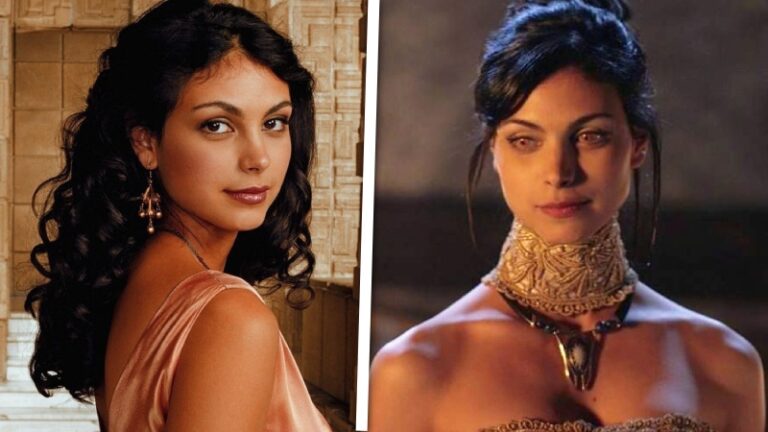 The stunningly beautiful Companion Inara made her (sometimes) home on board Serenity, with a tense and smoldering relationship with Captain Malcolm Reynolds. Inara lives by the code of her guild, where Companions choose their own clients and provide not just physical but also personal and emotional companionship for high-society types.

Her role on Stargate SG-1, of course, couldn’t be more different. Amidst their invasion of our galaxy the Ori used their advanced knowledge to rapidly age Vala’s newborn daughter, who was miraculously conceived by the Ori in order to serve as their emissary: the “Orici.” When the child returned in “Counterstrike,” she was a full-grown woman.

Played by Morena, Adria was the leader of the enemy invasion fleet. This made her the show’s chief antagonist for its final season, and the actress appeared in a total of five episodes. Cold and calculating, Adria was focused on the Ori’s objective to force entire worlds to bow to the ascended beings, and ultimately pursued that power for herself.

After her turn in Season Ten she returned as the Big Bad in the follow-up movie Stargate: The Ark of Truth. She is staying very busy today, recently starring in The Endgame on NBC. 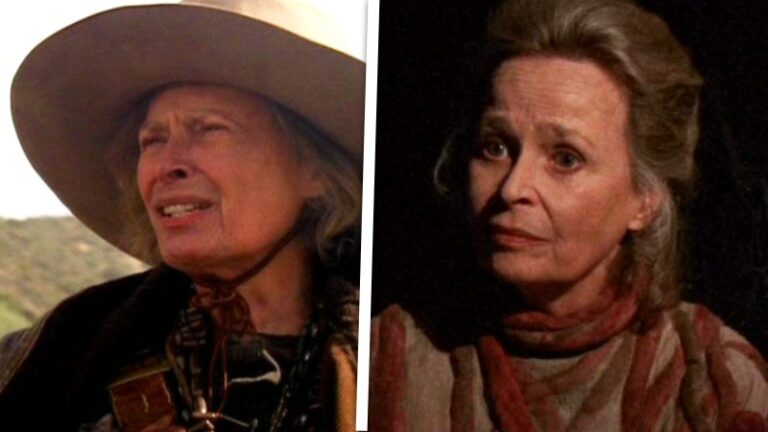 When Mal and his crew needed to unload some cargo lifted from an Alliance ship they turned to Patience, a frienemy and the cut-throat matriarch of the backwater moon Whitefall. When Patience tried to stab Mal in the back he turned the tables on her and took out her gang with a sniper on the ridge.

Veteran dramatic actress Bonnie Bartlett had already made her Stargate appearance four years earlier. When SG-1 was wrongfully imprisoned on an alien world by the Taldur — a legal system that is short on trials but long on sentences — they found themselves on a prison planet with a Stargate but no D.H.D. to dial out. There they met Linea, a nice, older woman who seemed like she couldn’t hurt a fly.

Linea was a brilliant scientist, and with her help the team managed to power the Stargate for a manual dial-out to escape back to Earth … where Linea showed her true colors. She wasn’t innocent at all but had been justly imprisoned, responsible for the destruction of (at least) an entire world. Linea activated the base’s self-destruct before escaping through the gate, leaving behind the message: “All debts have now been paid.”

The character did return the next year, now played by actress Megan Leitch — a younger Linea, who was de-aged by her immoral experiments on the planet Vyus (“Past and Present”).

Today Bonnie Bartlett is 93 years old, and you can watch her talk about her Stargate role over on “Dial the Gate.” 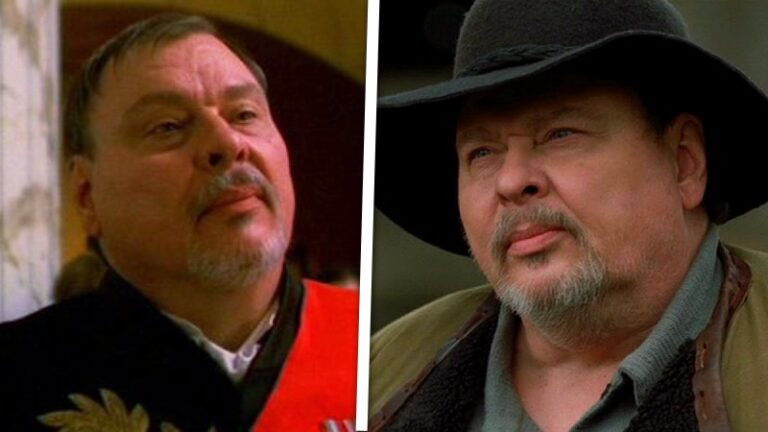 Speaking of Kaylee’s fancy dress and love for strawberries, in that same episode actor Larry Drake played Sir Warwick Harrow, a nobleman on Persephone who was looking to move some property off-world (but out of the eye of the Alliance). When Mal and his crew turn up at a high-society event to try and land the job, Mal ended up challenging one of Inara’s clients to a duel. The captain acquitted himself well, and Harrow agreed to hire the Serenity crew for the job — which was transporting a herd of cattle on board their ship!

Drake played an antagonist on Stargate SG-1, in the fifth season episode “Beast of Burden.” Burrock lived on a world where the Goa’uld once ruled, and their Unas servants were slave-masters over the human population. After an uprising long ago, now the Unas are the slaves and he is the slaver.

When Burrock and his men kidnapped the Unas Chaka from his home planet, it drew the attention of Daniel Jackson and SG-1. At first they tried to reason with him, but it was clear that Burrock did not see the Unas as intelligent beings with the right to self-determination. After helping Chaka and the other Unas to escape captivity, the team left them to a revolution of their own.

Best known for his roles on L.A. Law, Darkman, and Dr. Giggles, Drake’s final credited role is in the horror film The Secrets of Emily Blair. He passed away in 2016, at the age of 66. 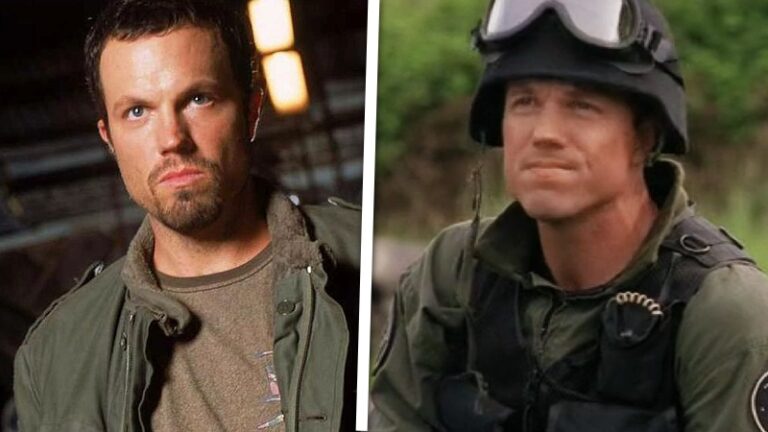 “The hero of Canton, the man they call Jayne!” Jayne Cobb is exactly what he appears to be — a mercenary with no pretense, no airs, no hidden agenda or deeper angst. Just give Jayne his favorite hat and the biggest gun on the ship (that’d be Vera) and he’ll get done what needs doing.

His character on Stargate wasn’t quite so brash and crude, of course. But all things considered, Colonel David Dixon wasn’t so different. The loyal and no-nonsense commander of SG-13, Colonel Dixon led his team through the Stargate and discovered Ancient ruins on an alien world. It was unusual for the show to spend so much time away from SG-1, but in these scenes it became clear that SG-13 had their own close bonds of camaraderie.

In the end the team fan afoul of a Goa’uld probe and found themselves on the front line of an intense ground attack by Jaffa forces. SG-1 joined the backup from Stargate Command, and thanks to the heroic sacrifice of others Dixon and his team all made it out alive.

Which was your favorite Firefly crossover appearance? And who else from the show’s cast would you have liked to see on Stargate? Post it in the comments below! 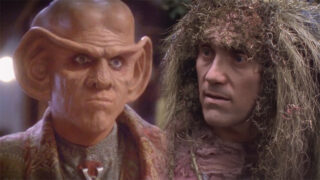 Read Next:
Every Star Trek Cast Member Who Appeared On Stargate

What a great synopsis. Loved both of these shows. Binge watched them together.

‘Heroes’ is one of my favorite Stargate episodes, and part of that is because of SG-13. Adam Baldwin & crew were instantly likeable, and he was hilarious when talking about kids. I would have loved to see more of them.

You’re right — my bad! I think I watched most of the first season.

I think Jewel State was a great crossover character, I knew she was the young wraith girl. I always thought that she was a really good fit as the young and beautiful Dr. Keller. Bring SG back plz.

Only 3 Baldwin, Baccarain and Straite. The other 2 weren’t on Firefly and Stargate they were on guest stars

“Actors,” not “cast members.” You tell Bonnie Bartlett she was never “on” Firefly! 😆

Actually, The USS Nathan was an Arleigh Burke class destroyer with a draft of 30 feet. Yet somehow it navigated up the 12 foot depth pool of the Mississippi River to St. Louis.