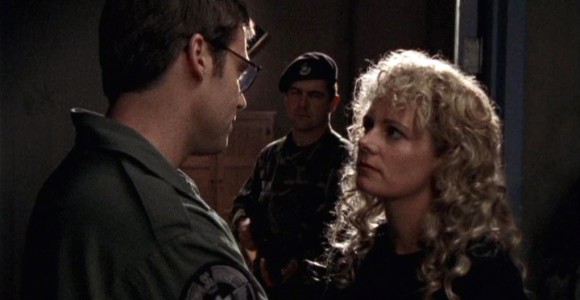 SG-1 discovers a planet of people with amnesia, and a familiar enemy returns to the S.G.C. wearing an unfamiliar face.

SG-1 journeys to the planet Vyus, where they find a society in chaos. Their elders and children are missing, and the entire population has amnesia. They have no memories beyond the past year, when "the Vorlix" occurred.

A leader among the people is Ke'ra, a beautiful young woman with intuitive abilities in science and medicine. She volunteers to return to Earth, along with two other citizens, in the hopes of finding a cure for the people and restoring their memories.

On Earth, a DNA-matching test confirms Major Carter's suspicion: Ke'ra is Linea, an older woman whom SG-1 helped escape from the alien prison colony Hadante ("Prisoners"), and who was known as "the Destroyer of Worlds." Linea had escaped the S.G.C. to Vyus, and it was her experiments in longevity that caused the mass amnesia. Aside from this gross side effect, her experiment worked: she and the people were made instantly young. The town elders were not missing – the people were the elders.

Meanwhile, Daniel has begun to take a special interest in Ke'ra, and does not want to believe that she is the Destroyer of Worlds. The group decides not to tell her who she is, but uses her skills and knowledge to find a cure for the amnesia. A chemical once used as a pesticide on Vyus, called Dargol, has built up in the brains of the people.

When a cure is found and the Dargol can be dissolved, Ke'ra smuggles a dose back to her quarters and uses it. She refused to believe that she had been Linea, and wanted to prove that it wasn't true. But it was.

Linea remembers everything, and knows of the monster she truly is. She wants to kill herself, but Daniel has a better idea: she agrees to take the youth treatment again, and again loses her memory. She is now Ke'ra, and is sent back to Vyus with her friends.