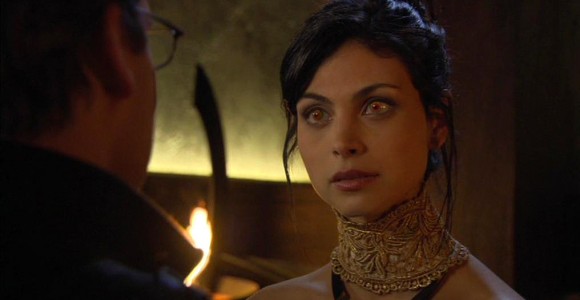 The Jaffa take the fight to the Ori, using a genocidal weapon on their new worshipers and landing SG-1 in the middle of a war they can't control.

Undercover on a world converting to Origin, Colonel Carter, Colonel Mitchell, Dr. Daniel Jackson, Teal'c, and Vala Mal Doran listen as the now fully-grown Adria ("Flesh and Blood") invites the new believers to join her army. In orbit, Odyssey detects powerful radiation emanating from the Stargate. Colonel Emerson, the ship's commander, beams out the team as the wave strikes, killing everyone on the planet.

Vala confesses to Daniel that she is relieved Adria is dead. She felt guilty that she hadn't stopped her before.

Bra'tac arrives on Earth and informs General Landry that the new Jaffa leader, Se'tak, intends to use the Ancient weapon on Dakara against the Ori forces. Landry reveals SG-1's narrow escape and calls the deaths of the planet's inhabitants mass murder. He insists on meeting Se'tak face-to-face.

Carter and Teal'c realize that the radiation wave had to come from the weapon on Dakara. Teal's is shamed by the actions of his people. Mitchell and Carter refocus on the opportunity to examine an unguarded Ori ship. The team beams aboard and splits up.

Jackson tells Vala that he understands her feelings because of what happened to Sha're, his wife who died seven years ago ("Forever In a Day"). Meanwhile, Teal'c and Mitchell find the engine room and plant a C4 bomb as a back-up plan, in case the ship cannot be salvaged before the Ori return to this planet. Carter discovers the bridge with a command chair interface similar to the one in Antarctic.

On Dakara, Landry confronts Se'tak. He tells Landry that he no longer feels bound by the agreement made by his predecessors not to use the Ancient weapon. He believes that desperate times call for desperate measures, and the change to seize the Ori ship will allow them to turn the tide against the Ori.

Threatening Teal'c and Mitchell, Bo'rel commands the rest of SG-1 to surrender. Sam is about to call Bo'rel when Jackson, hiding with Vala, beats her to it. As he tries to reason with Bo'rel, he and Vala are discovered.

But Adria, who survived the radiation wave thanks to a pendant bearing a piece of the holy city Celestis, rescues them by killing several Jaffa with her powerful telekinetic abilities.

Jackson tries to zat Adria. She telekinetically points a staff weapon at him even as she strangles him. Vala intervenes. Clearly glad to see her mother, Adria vows they will never be separated again. She didn't believe when the others told her that Vala had abandoned her.

Elsewhere, Carter deactivates the ship's power before locating Mitchell and Teal'c. The three overcome Bo'rel and his Jaffa.

Vala wants Adria to come with her, but Adria refuses. Searching for information about the weapon, Adria probes Daniel's mind. Unable to extract an answer, she reanimates a Jaffa and learns about the weapon on Dakara. It is the only thing capable of stopping the Ori, and thus becomes her sole target. The ship takes off under her power, ripping through the orbiting Jaffa ships with its beam weapon before entering hyperspace ... on a course for Dakara.

On Dakara, Landry tries to reason with Se'tak, who believes the old alliance is of no use, especially since it is the Jaffa who are dying. This is why Se'tak tested the weapon against converted humans, not Jaffa. Furious when he hears about the destruction of his ships, Se'tak orders Bra'tac and Landry held. He suspects that SG-1 is in control of the Ori warship.

While Carter tries to gain control of the vessel from the bridge, Mitchell and Teal'c search for Jackson and Vala – only to encounter Bo'rel and his Jaffa again. Teal'c convince his distrustful brothers that someone else is controlling the ship, and that they once again share a common enemy.

Adria believes that the galaxy will be converted within the year. In a rare moment of self-doubt, she wonders how she can persuade a galaxy to follow Origin if she can't sway her own mother. Jackson tries to reason with Adria: he says people should be given a choice. Countering, Adria says she is trying to bring a galaxy from darkness into light. All doubt must be removed lest it spread like cancer.

The Ori ship arrives at Dakara. Se'tak believes SG-1 is in command and seeks vengeance. He vows to Landry that he will recapture it and lay siege to Earth. Landry and Bra'tac are taken to the weapon control room as it fires on the Ori ship.

Agreeing that the ship cannot be allowed to fire on Dakara, Mitchell and Teal'c try to detonate the C4, but Adria prevents the explosion.

Odyssey arrives to beam out SG-1, but the shields are still active. Jackson tells Adria the Ancients will act, but she knows the Ori have free rein in this galaxy. She adds that "they" have plans for Jackson himself.

Carter manages to disrupt the shields as the radiation wave moves from the planet's surface toward the ships in orbit. SG-1 and Vala are beamed out as the wave hits. All Jaffa aboard die, but Adria and the ship are unharmed. The Odyssey escapes into hyperspace as Adria turns the ship's weapons on Dakara, destroying the Ancient weapon and rendering the seat of the Free Jaffa government desolate. Bra'tac and Landry escape via the Stargate.

At the S.G.C., Teal'c delivers the news of Dakara's demise. Five more planets, including Hebridan (Warrick's home) and Langara (Jonas Quinn's planet) have now fallen to the Ori.