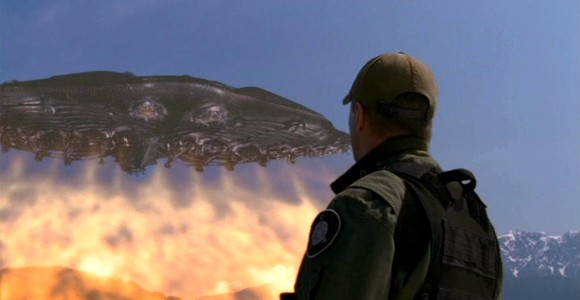 SG-1 is caught in a conflict between two civilizations trying to colonize the same planet.

"Scorched Earth" is a story ripe in moral and ethical dilemmas. Does the S.G.C. have the right to decide who lives and who dies? That is the question posed here.

Two civilizations are utterly dependent on the choices to be made by the S.G.C., represented by Colonel O'Neill. In simplest terms, O'Neill must choose which society deserves to live on this planet. Looking at his choice from another perspective, however, it becomes far more harsh, for only one culture can survive. Perhaps this is why our Colonel refuses to see that angle.

Colonel O'Neill remains frustratingly single-minded in this episode. He feels a deep sense of obligation to the Enkarans. This obligation prevents him from seeing Lotan's perspective, thus he feels no sense of duty, neither morally nor ethically, to resurrecting the dead but preserved civilization that enabled the creation of Lotan -- the Gadmeer.

The choices faced by Colonel O'Neill in "Scorched Earth" bear a striking resemblance to those in "The Other Side." In that recent episode, Jack was so adamant to obtain potential Goa'uld-fighting technologies that he was ready to arm one side in a global war without ever coming to learn what the war was about, or what the opponent represented.

Jack's single-mindedness in that episode nearly resulted in his assisting with genocide. That revelation lead the Colonel to indirectly commit murder, closing the iris after a Nazi-esque leader stepped through the Stargate to Earth. Therefore, I was a little surprised at first to find that attitude resurfacing again so soon.

By refusing to acknowledge the rights of the Gadmeer, Colonel O'Neill is effectively repeating his error -- though this time he, alone, would be directly responsible for the genocide. His decision to arm a naquadah reactor aimed at destroying the Gadmeer's terraforming vessel would not only wipe out that race, it would destroy any and all evidence that they had ever existed.

Even Major Carter is forced to accept this possibly skewed perspective. Though she obviously disagrees with the Colonel's decision, she is under his command and must follow orders. Teal'c also feels compelled to obey. It is therefore left to Daniel Jackson, a civilian, into whom that intense military code has not been so thoroughly ingrained, to find a compromise.

I enjoyed this story tremendously, as I enjoy most character studies. The choices each individual makes speak volumes about who they are. Jack is military, all the way. His first obligation is to his duty. He saw it as his duty to destroy the Gadmeer ship. When he learned that Daniel was aboard that ship, he waited as long as he could. He hesitated for critical seconds after Carter announced that he had to act immediately. But his duty to the Enkarans over-rode his duty to Daniel. And he activated the device.

I have no doubt that he would have mourned that decision, but not regretted it, if the ship had blown and Daniel had in fact died with it. However, the ship did not blow. Daniel struck a compromise with Lotan at the last possible second, and the device was transported away.

How will these events affect the character of Colonel Jack O'Neill? Perhaps not at all. Of course he will be glad that Daniel survived, that everyone survived. But seeing as how the events of "The Other Side" did not affect his decisions here, I doubt the events of "Scorched Earth" will affect his decisions in later, potentially similar situations. Jack O'Neill is trained to make quick decisions in the field based on immediate facts. If we see him begin to hesitate, we will see his military career, and a huge piece of who he is, begin to die.

The next question is: how will these events affect the relationship between Jack and Daniel? Again, I'm not sure it will. Daniel knows Jack's military "single-mindedness." Jack knows Daniel's chivalric nature. These characters are perfect opposites, and as such they strike a great balance. They keep each other grounded.

I cannot possibly end this review without once again applauding the special effects artists. The ship and its terraforming fires were phenomenally depicted. I could truly imagine what it must be like to stand among the Enkarans and watch it's arrival. Terrifying could scarcely describe the sensation.

The size of the ship could be assessed by its slow, hardly discernible movement, which I compare to watching the approach of an immense, yet distant storm. You know it's coming, but you also know you have some time to watch its progress in awe before heading into the basement. Of course, the Enkarans had no such refuge. They were ready to die.

All in all, this was another wonderful offering from a cast and crew I have come to thoroughly respect. In "Scorched Earth" they have given us another planet to visit; they have introduced us to two very different cultures; and they have given us another glimpse into the best and the worst of our favorite characters. Although I'm not entirely convinced the Enkarans would have been as steadfast as they were under the circumstances (unless these are the bravest souls known to man!), I have to give this episode a very high rating, indeed!