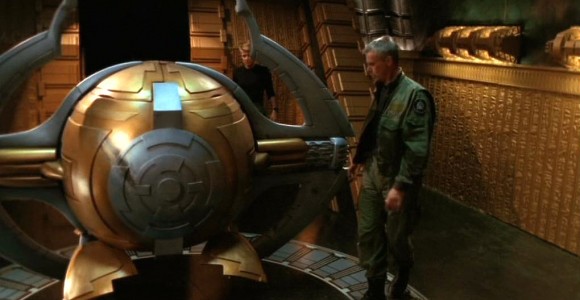 SG-1 must stop Apophis and Heru'ur from forming an alliance of their powerful forces, while Teal'c is captured and tortured by the Goa'uld.

"The Serpent's Venom" was another "edge of your seat" kind of episode. I thoroughly enjoyed the two story threads, and thought they came together quite well. I also liked getting some more insight into Teal'c and Daniel, and perhaps even Jacob/Selmak. Once again, whole new avenues have been opened up, and are ready to be explored in future episodes.

It was interesting to find Daniel capable of translating, in a matter of minutes, something the Tok'ra have failed to make sense of over an untold period of time. I would like to see this angle brought out in future episodes. Daniel's value to both the Tok'ra and the Goa'uld System Lords could have suddenly increased exponentially.

On the other hand, Teal'c has now proven to be a much greater threat to the Goa'uld than previously thought. He has proven to be unbreakable, capable of enduring a degree of torture that would kill lesser men; and doing so with his honor and his beliefs intact. He has thus turned at least one sworn enemy, Rak'nor, into an admirer who is likely to spread Teal'c's message of freedom for all Jaffa.

The opening scene of "The Serpent's Venom" intriguingly depicts Teal'c as a prophet. There is an almost religious awe displayed on the visage of the young boy who heralds his arrival, and Teal'c acknowledges this boy with a light touch that could be construed as a blessing. This imagery, coupled with the rumors which will undoubtedly grow out of the preaching I now expect from Rak'nor would surely raise Teal'c in the eyes of his "followers" to a figure above other men. He could be said to be taking on a godly role.

In a culture where Teal'c is effectively depriving his people of their gods, this could pose a significant challenge in the future. People need something to believe in. It would be natural for the people of Chulak to see Teal'c as their new god as they release their old gods, the Goa'uld.

I would expect Daniel, our local cultural expert, to be the first to see the danger signs of this transference. An episode with Daniel trying to open Teal'c's eyes to this challenge could be an excellent relationship builder for these two characters.

I'm also left to wonder further about Jacob/Selmak. He does not appear surprised when the intercepted message between Heru'ur and Apophis is sent to the S.G.C., and is quick to enlist the aid of the S.G.C. in sabotaging the meeting of these two System Lords without even mentioning his plans to the Tok'ra High Council. Could this mission have been planned all along? Is the S.G.C. still a pawn in some high stakes Tok'ra games?

Further, Jacob/Selmak once again is all too willing to sacrifice a member of the S.G.C. While Jack tries to figure out some means of rescue, Jacob insists that Teal'c is "expendable." This could be Jacob's military career coming forth, forcing him to analyze the situation logically rather than emotionally. It could just as easily be his Tok'ra influence. After all, the Tok'ra, like their brethren Goa'uld, have been shown to arrogantly believe all humans are lesser beings than themselves.

Although Jack's character is not further explored in this episode, there are some good scenes which play on the traits we've already been made aware of. I particularly enjoyed the colonel's eagerness when Jacob turned the ship's controls over to him. Jack's face lit up like a kid at Christmas when he realized he was going to be given the opportunity to fly the ship.

I also enjoyed the way he gestured with his hand, as though he could simply sweep the mines out of his way, after he realized how difficult it was to maneuver through the mine field while simultaneously keeping the mine Daniel and Sam were working on stabilized.

Lastly, there was some good Daniel and Sam interaction in this episode, with Sam's mathematical mind demanding black and white answers, while Daniel's experience with the shades of gray associated with any sort of translation led him to accept such grays here as well. It was great to see Sam's reactions whenever Daniel expressed his answers as possibilities rather than definites. Daniel's failure to recognize the significance of "zero" and Sam's insistence that he just accept the fact that zero would matter to the civilization that designed the mines was also good to see.

I'm curious to know more about the Tobin civilization, in fact; and I would expect Daniel to be curious as well. The culture has become extinct, or so the Tok'ra claim. Could it be they were a paranoid race that drove itself to extinction? They protected themselves from outward attack by littering their space with mines. I would assume that they would also have destroyed or buried their Stargate, if one had existed on their world. Thus they could only have destroyed themselves. Somehow I doubt this question will be answered in upcoming episodes, though it could be an interesting one to address.

As usual, the special effects artists did a splendid job. The costumes, something I have never commented on before, were also superb -- again, as usual. However, the lingering bits of metal in Apophis' face as he continues to heal after his torture at the hands of Sokar looked all too familiar. The name "Seven of Nine" comes to mind. I found the similarity disappointing.