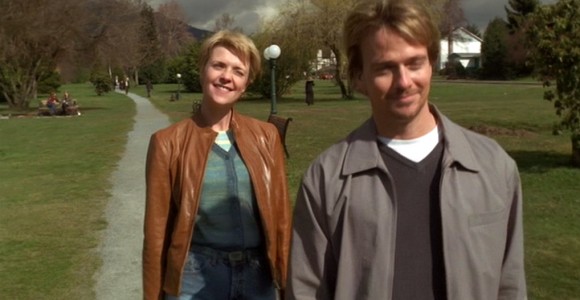 An alien being is smitten with Carter and follows her back to Earth, assuming human form and pursuing a relationship with her.

If you've seen movies like City of Angels and E.T., and you're at least familiar with TV's MacGyver and Star Trek's Q Continuum, then nothing in this season's third episode will be new to you. Nonetheless it is a good story well told, as we've come to expect from the series. And if someone had to combine these four relatively diverse scenarios, no one could do it as expertly as the folks behind Stargate SG-1.

The character of Orlin, played by Sean Patrick Flanery, is every bit the fallen angel. He is the Nicolas Cage to Samantha Carter's Meg Ryan (City of Angels), ready to give up eternity for the love of a woman who barely knows he exists. And despite his creepy, stalker-esque entrance, he exudes such an intense longing born of such a deep-seated loneliness that Sam Carter doesn't stand a chance. She's hooked from the moment he convinces her to experience his "essence."

But, of course, there can be no fairy-tale ending. Orlin is, after all, an alien. Just as the government was eager to get its hands on young Elliot's E.T., so too is the Pentagon's Colonel Simmons eager to get his hands on Orlin.

Ironically, Simmons is played by John de Lancie, recognizable to Star Trek fans as the infamous Q -- a character not unlike the "others" of Orlin's race. First introduced in Season Three's "Maternal Instinct" with the being called Oma Desala (otherwise known as Mother Nature), Orlin's species is one that no longer exists in corporeal form, and possesses powers well beyond human understanding -- so much so that their ability to control the weather is shrugged off by Orlin as easy.

It is fun to see de Lancie play the role of the naïve human, opposite this Q-like being. Where his character of Q placed Captain Picard on trial to justify the continued existence of the human race, now de Lancie is among those who are being judged. Simmons' insistence on experimenting with the weapon found on Orlin's planet could bring down the wrath of the others, who would not hesitate to destroy us just as they destroyed the people Orlin had erroneously attempted to help.

This time, however, Orlin's help is justified. If he can prevent SG-16 from successfully powering up this weapon, he can save the people of Earth. If he can't, then his error on Velona will be repeated here, and he will have that many more deaths on his conscience.

Yet how can he help? If he returns with Sam to the S.G.C., he will surely be taken into custody by Simmons. Nor can Sam dissuade her superiors from proceeding with the test. And though Hammond tries to delay it, Simmons' pull with the Pentagon overrides him. The test will go on.

This is where MacGyver kicks in. Having taken human form to prove his love for Sam, Orlin's "super powers" are lost. He's now forced to rely on his superior intelligence. Okay, so what can a guy that makes big honkin' emeralds in a microwave do when he's stuck in a house in suburbia? Make his own Stargate, of course!

In pure MacGyver fashion, Orlin gathers up some common household items and puts Sam seriously into debt ordering additional supplies through the Internet. By the time the military comes to get him, he's made a miniature Stargate.

Flanery's Orlin is a soft-spoken, puppy-dog-eyed kind of character so much like Cage's angel that I can't help but imagine Flanery studied Cage's film very closely before beginning work on "Ascension." Amanda Tapping's Sam Carter, however, is not comparable to the Meg Ryan of that same film. Okay, so the hair is similar. But the roles are not. Sam the planet-hopping physicist doesn't have the luxury of denying her angel exists.

Nor does Sam have the opportunity to fully give in to the love that is being directed her way. There is a brief walk in the park where her dimpled smile hints at a deeper love story yearning to be told; yet that story is not allowed to develop.

I enjoyed the chance to gain more insight into just who this Samantha Carter character is. Her home is especially telling. At the S.G.C. she is a military-minded scientist, pure and simple. But at home, she has a soft side, one that relishes the cozy comfort of hand-made quilts and family photos. The décor is soft and subdued, lacking both "cute," girlish items and rough, hard-edged ones. It is not just a "house," a place to stay in between excursions off-world; it is a home.

Unfortunately, it is a home that her adopted family -- the other members of SG-1 -- do not visit often enough. When Colonel O'Neill and Teal'c arrive at her door with pizza and a Star Wars video in hand, it is a surprise to both sides -- O'Neill is shocked that she might already have a guest, and Sam is equally shocked to see them there.

Okay, it's a shock from a third angle as well: I, as the viewer, am shocked to see Teal'c dressed like an urban cowboy!

Humor and character development have been important aspects of "Stargate SG-1" since the very beginning, and "Ascension" is no exception. But there is something new showing up consistently this season. The camaraderie fans have been begging for is really beginning to unfold. The moment at Sam's door reminds me of several fan fiction stories I've read. The exchange regarding Teal'c's interest in seeing humans doing "battle in a ring of Jell-O" is also reminiscent of fan-fics.

I look at these moments with a fond sense of wonder. We are being heard, and the show is as terrific as ever, if not more so.

I would like to give this episode another 4-star rating; but I can't pretend it's perfect. There are problems, most notably Daniel's miraculous ability to translate the writing found on Orlin's planet, despite the utter lack of any point of reference.

Another glitch occurs with Sam. What exactly is it that motivates her to hide a suddenly flesh-and-blood Orlin? Here is her perfect opportunity to prove to O'Neill that she isn't crazy, that there really is an alien in her house; but she doesn't take it.

Still, my concerns with this episode are small ones. I thoroughly enjoyed the story. Now I ask: what's next? We've lost Colonel Maybourne, and Senator Kinsey has been awfully quiet -- but Colonel Simmons seems quite eager to fill the role of the "internal enemy" they have left vacant.

And what's happening with Daniel? The past few seasons have seen him simmering to a slow boil. He's obviously reached his boiling point. Quick with sarcastic retorts that are bound to get him into trouble before long, he's becoming almost a shadow of Jack -- yet he still manages to maintain his own strength of character, evidenced best in his twice repeated, "How's Sam?" when Jack focuses on seeking evidence of the alien rather than on Sam's own state of being.

Season Five continues to prove just how good Stargate SG-1 can be. Where it will finally take us remains a mystery; but I sure am enjoying the ride!