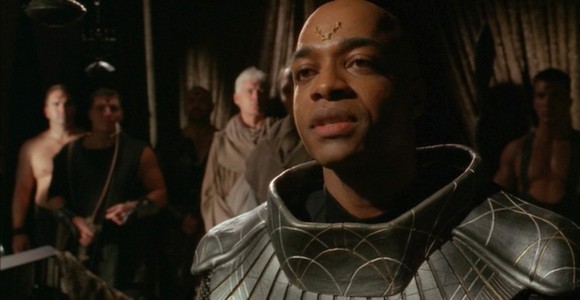 A charismatic Jaffa leader seeks to forge an alliance between Earth and his rebel followers, winning the allegiance of Teal'c and Bra'tac.

What do you do with an unemployed Jaffa? "The Warrior" is a dark primer into the murky politics, conflicts and shifts in the balance of power underway in the Stargate SG-1 galaxy, and continues the saga of the rebel Jaffa fighting for their freedom against their Goa'uld false gods.

Assembled on Cal Mah are the remnants of the Jaffa armies that previously served at least six Goa'uld System Lords. (I observed ten different battle standards and identified the emblems for Ra, Cronus, Hathor, Heru'ur, Setesh, Imhotep and Apophis.) There, the former First Prime of Imhotep, Kytano, is forging the former opponents into a single Jaffa army.

The Jaffa army, however, is apparently no different in their battle plans that their former Goa'uld masters. As Colonel O'Neill points out, Kytano is using the same tactics that the Goa'uld have used for centuries. Assassinate your adversary, absorb the conquered resources, and continue on to your next adversary. The Jaffa will continue to exist to be used only as a resource.

The tactics that include the practice of using the Jaffa as cannon fodder ("Rules of Engagement"), and as suicide teams, fall within the Jaffa personal code of dying for their cause. It is these tactics, and this belief, that conflict with the rules of engagement, and beliefs, that Colonel O'Neill adheres to.

O'Neill and Bra'tac are in agreement regarding the status and value of individual combatants. Bra'tac advises, "When one over-commits, one becomes vulnerable to counter-attack. When one achieves balance in combat, one will survive to achieve balance in life." O'Neill stated in "The Serpent's Lair," "I think a better idea is to get the other guys to lay down their lives for their world first" -- in direct contrast to Kytano's belief that "one must strike with single-minded purpose towards victory without regards for one's survival."

However, this is not the only conflict. There is also the ongoing conflict within Teal'c. As seen before in various Teal'c-centric episodes ("Bloodlines," "Family," "The Serpent's Venom" and "Crossroads"), Teal'c's desire for the freedom of his family, and his fellow Jaffa, conflicts with his service to Earth. And this conflict is not resolved in this episode; indeed it is heightened, as Teal'c is now the de facto leader of the Jaffa due to his victory over Kytano.

On my first viewing of "The Warrior," I was alarmed by the seeming indifference by Bra'tac to what was transpiring -- not only the inconsistencies in Kytano's behavior, but also the conflicts that Teal'c was experiencing. It was in watching again, and recognizing Bra'tac's anguish that I realized that Bra'tac understood too clearly -- all his hopes and dreams for the Jaffa were in jeopardy, and he had no solution. (Tony Amendola turned in another marvelous performance in this episode.)

In "The Warrior," we learn that apparently Zipacna survived the symbiote poison on Revanna, as Kytano mentions that his warriors had just done battle with Zipacna's Jaffa. Also, apparently Nirrti is still a player, as she has her own Jaffa transporting weapons-grade naquadah. And it was a pleasure seeing Rak'nor again ("The Serpent's Venom").

And ... what is that crafty, wily Yu up to? Was his attack on Cal Mah a solo effort against the Jaffa, or was he in league with the other System Lords? If his sole intention was to destroy the rebel Jaffa, then why wasn't their escape through the Stargate blocked (as the Tok'ra escape on Revanna was blocked in "Last Stand")? If, however, after the events of "Summit" and "Last Stand," Yu is now battling the remaining System Lords and Anubis, it would make sense to have the rebel Jaffa available to be a thorn in his opponent's side.

Kudos to both stunt coordinator Dan Shea for the set up of a fascinating display with the mastaba fighting, and to director Peter DeLuise for using the Matrix-style effects to highlight the sequence. Again, the attention to detail by the Stargate SG-1 staff is amazing -- especially the battle standards in Kytano's camp. I loved the pyramid-shaped tents.

In the words of William Wordsworth ("Character of the Happy Warrior"), the warrior "finds comfort in himself and in his cause." And our warriors, Teal'c, Bra'tac and O'Neill, do as well.