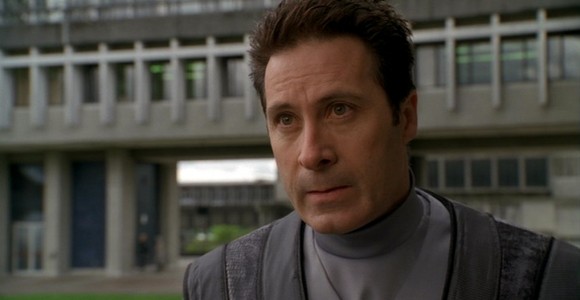 The Tollan offer Earth advanced weapons technology, prompting a secret investigation on Tollana – one that leads to a startling discovery.

It is a sad day on Tollana, as SG-1 joins Narim, High Chancellor Travell and a small gathering of others for the funeral service of Omac – a respected Tollan leader whom SG-1 rescued more than three years ago ("Enigma").

As Samantha Carter compliments Narim on his tasteful eulogy, Travell approaches Colonel Jack O'Neill with an unexpected invitation. The team is welcome to return to Tollana the next day to reopen talks of acquiring advanced Tollan technology – something that Earth has been refused time and time again ("Pretense," "Shades of Grey"). Tollan law forbids it, as they once shared their technology with a neighboring world – leading to the planet's self-destruction.

And there is one more thing to consider: with guards watching Narim slips Carter a holographic device before she leaves through the Stargate. Back at the S.G.C., she plays the message: Narim received a warning from Omac before he died, that Earth is in terrible danger.

Cautious about the message's cryptic meaning, SG-1 returns to Tollana the next day. Daniel Jackson and Jack meet with Travell, who offers them a Tollan ion canon – capable of shooting down a Goa'uld mothership in orbit. The two are shocked at the offer, and at the fact that the Tollan Curia – the ruling body – ask so little in return. All they want is trinium, a valuable metal used in their technology, of which they have exhausted their supply.

They return to Earth with the good news, and General Hammond is equally skeptical. But Carter's analysis puts things in perspective: for complete, global coverage, they'll require no fewer than 38 ion canons. The weapons are so advanced that backwards-engineering them from a single canon is well beyond us.

The team returns to Tollana to make the request, and are greeted by Narim. Though he initially believed that Omac's warning referred to the Curia's impending offer of Tollan weapons to Earth, he has found something much more disturbing. With evidence from Omac's health implant – which recorded that he was in perfect health, though his cause of death was attributed to a heart attack – Narim now believes that Omac was murdered.

And with Omac off the Curia, the balance of votes have swung to Earth's favor. The majority of them now favor a more open policy, and Travell agrees to provide Earth with 38 ion canons.

Narim is aghast when he hears the news, since it is unthinkable that his leaders would share their technology with a less-advanced people. But even more shocking is the discovery that the Curia have been hiding something from the people, even deleting session records. On Tollana, it is an unthinkable crime, more heinous than murder.

With this knowledge, SG-1 convinces Narim to take a stand against his government. Something is going on, and they must find out what it is. Narim helps Carter and Jackson break into High Chancellor Travell's office, while Teal'c and O'Neill track a shipment of trinium to a Tollan installation.

Inside Travell's office, they find that a Goa'uld mothership entered orbit two months ago, and that the ion canon defense network fired – ineffectively. This Goa'uld, whomever he may be, has developed advanced shields that can stand up to Tollan technology. Though the records indicate that the ship left peacefully, Sam doesn't buy it.

Jack and Teal'c find out what their trinium is being used for – the Tollan are secretly constructing a warehouse full of weapons of mass destruction. Searching Travell's computer, Narim discovers that they use the Tollan phase technology to pass through shields or solid matter before detonation. He concludes that the Curia intends to use them to replace the ion canons in the defense of their world, but Sam points out that it doesn't add up. A Goa'uld would never drop by and show off his new shields, and then leave so that they'd have time to find a way to penetrate them.

Travell and her guards burst into the room, and confront the three. Narim, in turn, confronts her, and learns the Curia's reason for doing what they are doing. The Goa'uld Tanith is on Tollana, and has threatened their world with annihilation unless they build weapons for him – but not him exactly. Tanith is in the service of another Goa'uld, whose name he refuses to disclose.

Narim uses his phase-shift device to escape, and meets up with O'Neill and Teal'c. Jack convinces him to stand up against the Goa'uld and do the right thing, rather than sacrificing the galaxy to save Tollana.

While the Tollan military uses Narim's health implant to track him, Tanith orders Travell to demonstrate the new bomb by activating one and sending it through the Stargate to Earth. The iris that has protected Earth from the Goa'uld for years will be no defense.

Travell is flustered, but she has no choice. Her planet will be destroyed if she refuses. Carter explains it to her: the Goa'uld have a treaty with the Asgard ("Fair Game"), so they're getting the Tollan to do their dirty work.

The guards close in on Narim, but find O'Neill and Teal'c instead. They bring them back to Travell, who is concerned that Narim still hasn't been apprehended. O'Neill explains that they've bought him enough time to act against the Goa'uld.

An ion canon fires, presumably destroying the complex where the new weapons are housed. The city shakes, and Travell flees with her guards. Narim soon arrives, and explains that the Goa'uld will have assumed by now that the Tollan do not intend to honor their agreement. He helps SG-1 escape the building, and sends them off to the Stargate as the Goa'uld attack begins. Narim must say goodbye – he is about to lead his people in a fight they may very well lose.

Back at the S.G.C., the team meets with General Hammond. They can be reasonably sure that Tanith didn't get his hands on any of the weapons, although they have no idea about the identity of this new Goa'uld whom Tanith is serving.

A message comes in via a Tollan long-range communications satellite. Narim reports that Tollana's Stargate has been destroyed, and that ships attempting to flee the surface are being shot down. His message cuts out mid-sentence, leaving little hope that the Tollan will survive.