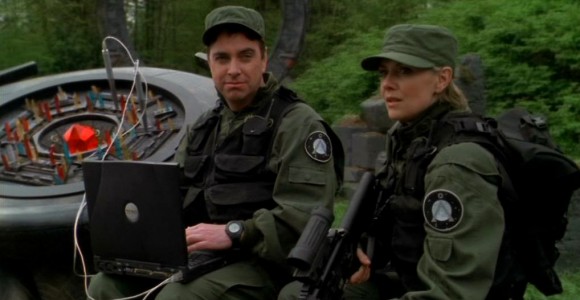 An S.G.C. scientist creates a computer virus to be used to disable enemy Stargates – but succeeds in shutting down the entire gate network.

"Avenger 2.0" is one of the most unique episodes of the season thus far, if only because it focuses primarily on a character who is not a member of SG-1: scientist Jay Felger. It is through Felger's eyes that we view the function and methods of the S.G.C., and as always an outsider's perspective is fun and fresh.

The character of Felger is, well, quite a character. In contrast to the poise, wit, and timely genius of our heroes, Felger is -- as Sam puts it -- a screw-up, a fact which even his own mother seems quick to point out to him. Hammond's patience with the man is short, and one botched experiment leads to another. He has a dubious ally in Sam, who admits that Felger is brilliant. This could explain why she has such patience with him, in spite of his general goofiness, aftershave obsession and inappropriate embraces.

In a way, Felger could be seen to represent the fans ... or at least the fan experience. For the most part he has watched and admired SG-1 from afar, but he holds their one collaboration close to his heart. His attachment to people he doesn't really know, his "admiration" of Sam, his Stargate dioramas and vaguely-creepy little action figures (and lets face it, who wouldn't want to hug Jack if given half the chance?) ... if none of these at least ring a bell, it's amazing you're even reading this review!

Of all the main characters Sam gets most of the screen time, next to Felger and his colleague, Chloe. Jack's presence is, as we've come to expect this season, abbreviated to say the least, although his contributions can't be overlooked. Scenes featuring Teal'c and Daniel were both in short supply, probably because of the reportedly convoluted shooting schedule Stargate is dealing with this season. This is, of course, subjective, but to this reviewer the episode didn't feel Teal'c-light, or Daniel-light, or Jack-light for that matter, mainly owing to the superb acting and comic timing of guest star Patrick McKenna.

Because of Sam's role in the episode, it's interesting to compare "Avenger 2.0" with last week's Sam-heavy "Space Race." While "Space Race" opened up facets of the character that really hadn't been seen before, "Avenger" spotlights aspects that are more familiar to viewers: Sam as the scientist and the soldier. Yet despite Felger's assertion, the focus also showed that she isn't perfect: she couldn't single-handedly outwit Avenger, and in the end she and Felger were rescued by Teal'c and Jack in their spiffy new Al'kesh.

Like Stargate itself, "Avenger 2.0" is sometimes a comedy, sometimes a drama. Though Daniel, Teal'c and Jack are in peril, trapped off-world along with a great many other teams, the gate network has been shut down and all looks bleak, one still spends a great deal of time laughing -- sometimes with Felger, sometimes at him -- in a way we don't often get to laugh at our heroes. Felger's antics, his outlook, his very personality and mannerisms are the backbone of a cool, comical episode.

What's good about this episode: Felger! Stargate scores again with humorous supporting characters. Chloe! Tossing another mind into the mix added another dimension to the episode, as well as some great character interaction as viewers watched the play-by-play of the Chloe-Felger-Carter triangle.

What's not so good: As has happened before, the episode cops out with a convenient conclusion: Jack and Teal'c appearing from out of nowhere with an Al'kesh, and with no explanation of how they came to have it in their possession. And then there was the technical jargon. Sure, Amanda Tapping understood what they were saying, but did anyone else? Just the mixed-up gate addresses alone were enough to make your head spin!

All in all, "Avenger 2.0" is a fun frolic through the corridors of the S.G.C. through a fresh set of eyes. We can only hope that Felger and Chloe will name their first child "Sam" ...

They say that humor is a subjective concept, and this time the mysterious "they" have hit the nail roundly on the head. I'd heard a rumor that this would be the season's comedy episode, and in the past those episodes have either managed to tickle just the right spot, or have been embarrassing to watch. "Window of Opportunity" is firmly in the former camp for me; "Avenger 2.0" plonks itself down in the latter.

Playing with stereotypes can be hazardous. Each member of SG-1 could have so easily fallen into that trap -- the leader, the geek, the babe, the warrior -- but instead they've been dealt with intelligently and have many-faceted personalities. When Felger was introduced to us in Season Six's "The Other Guys," his clichéd behavior was tempered by the sensible Coombs, and the gentle comedy of that episode was balanced by the presence of the team plot. The elements that made "The Other Guys" a success were missing here, and undiluted Felger The Geek just wasn't up to the task of providing an entertaining hour of usually intelligent television.

Although this wasn't a Sam episode, per se, she was the most prominent member of the regular team. Her uneven characterization was a little confusing at times. Were we seeing the events of "Avenger 2.0" through Felger's eyes, as indicated by some scenes where Sam was unexpectedly defensive of him? Or was it reality, in which case I'm stymied as to why both Hammond and Sam let Felger get away with not telling them anything about his amazing new project. And why, when Sam was the only person around who knew enough about the virus they'd unleashed on the gate network to make some progress, was she the one sent out to find a Felger who'd abandoned his post?

Despite the inconsistencies, Amanda Tapping pulled off everything that was asked of her with style and verve -- even the final scene.

A virus that could screw up the gate system was a great premise, poorly executed. If controlled -- and by that I mean if the SG teams had an anti-virus they could use at will --- it might have been extremely useful for the S.G.C. The ongoing trade between other planets would have ground to a sudden halt, use of the gate system by the Tok'ra and other allies would have been disrupted, but the self-centered nature of the virus could have been a great set-up for both drama and comedy.

But by rushing this idea through, by not creating an anti-virus before letting the virus loose, by not considering the consequences, all members of the S.G.C. were presented as, frankly, a little bit thick. Perhaps this was simply more evidence for the argument that much of this episode took place in Felger's head.

It wasn't all bad news; after all, this is Stargate, a show that rises above the crowd. Don S. Davis was as constant as the sun, forever pouring light on each and every scene in which he appeared. Hammond scowled, worried, flung out orders every which way, and provided stability in a manner only he can. Chloe was a rounded character who demonstrated that not all scientists at the S.G.C. are incompetent, and I would be interested to see her again, if only because she would add to the very few women we see working at the S.G.C.

And speaking of women, is it possible that there's a single male outside of her own team who can relate to Carter on a purely platonic level? It's wonderful that the SG-1 team is a friendship-only entity, but honestly, there are far more interesting things to note about Sam than the fact that she's a woman. Please, can't we move on from that?

Despite its flaws, this episode might have scored more highly with me if not for the appalling nature of the final scene. Perhaps it was meant to be a comment on degrading male fantasies; I honestly don't know. But it was a step beyond the daydream scene at the end of "The Other Guys" -- a step too far, in my opinion. This scene was a travesty, unrecognizable as Stargate SG-1.

As I said at the start of this review, and it bears repeating, humor is subjective. No matter how much I disliked this episode, I would urge others to watch and decide for themselves.