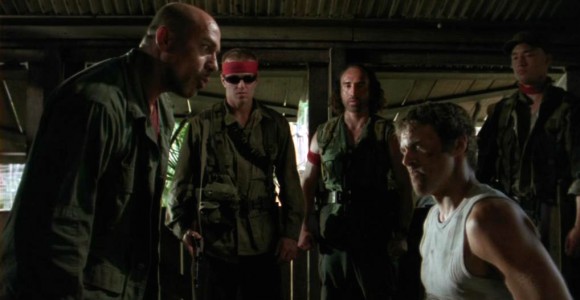 O'Neill seeks help from a former comrade to rescue Daniel and Dr. Lee, who have been kidnapped in Central America. Carter, Teal'c, and Jacob infiltrate Anubis's super-soldier facility.

Stargate SG-1 kicks off the second half of the season with "Evolution, Part 2," the continuation of the "mid-season finale cliffhanger that wasn't." We jump right back into the action: Daniel Jackson and Dr. Lee are missing and presumed abducted in the forests of Central America -- not Vancouver! -- and the S.G.C. has had a nasty run-in with some black-armored, gooey-faced, uncommunicative snakeheads designated as super-soldiers.

All caught up? Good.

Part of "Evolution, Part 2" deals with Jack's foray into Honduras to find Daniel and Lee with the assistance of his previously-unmentioned old buddy Burke. Burke, like most of Jack's acquaintances from times gone by, has serious issues. He was involved in a friendly-fire incident and he's a little peeved that Jack didn't stick up for him during the investigation ... not that that should stop Jack from going out into the middle of nowhere with the guy. Burke is a colorful character. He chews gum, laughs a lot, and talks loudly -- to the point where your humble reviewer feels compelled to ask: are you supposed to be tracking the bad guys, or letting them know exactly where you are?

Nevertheless, Jack and Burke use the majority of their trek to work out what really led to their friend's death, and while few Stargate fans will say no to learning more about any character's past, one has to wonder if all this back story was really ... necessary.

At the same time, Sam, Jacob, Bra'tac and Teal'c have arrived at one of Anubis' bases to find out more about these freaky new bad guys, and herein is the meat of the plot. What they find out is that Anubis has a whole lot more of them than anyone previously expected. Also, they have a very limited vocabulary.

What was actually a strength of "Evolution, Part 1" actually becomes a weakness in the conclusion: the constant shifting from Honduras to Anubis' base disrupts the flow and tension of both storylines. True, Stargate does like to split up the team and send them in different directions every now and then, but the goals of the two groups are so different, and the dichotomy of hot, humid Honduras and a cold, inhospitable space fortress is somewhat disconcerting.

After waiting long enough to be weakened by torture -- and having told the terrorists everything they wanted to know about the "fountain of youth" machine -- Daniel and Lee escape from the love shack and make a break for it. They run for the woods just in time to see that a previously deceased terrorist, in the immortal words of Monty Python, "isn't quite dead yet."

Perhaps it sounds as though I'm being overly critical. If that's so, chalk it up to the months I just spent in rerun hell, with only the familiar embrace of syndicated Season Six episodes to comfort me.

What was good about this episode: It did lay down some important plot points. Anubis has been using "mentally challenged" Goa'uld to make up his army of super-soldiers, and the artifact that is thought to be some kind of weapon against them is a sort of portable sarcophagus. I'm sure that will all be revisited at later times. Strange though it may sound, the thing that really caught my attention was the music during the Honduras sections of the episode. It was twangy. It was different. It was cool.

Another plus -- "Evolution, Part 2" actually has an epilogue scene, the kind of reunion-wrap-up that is sorely missing from too many Stargate episodes. The team gets back together, compares notes, shares injuries, and there are smiles all around. And who could have a problem with any episode that ends with lunch?

What wasn't so good: Quite a lot of the episode was devoted to a new character we've never heard of and a past situation that has little bearing on the circumstances at hand. Was the saga of Burke, Woods and O'Neill really necessary to the plot? Also, the mashing of two such disparate storylines gave the episode a choppy feel.

With such a great setup in the first half of this story, it was going to take an impressive collection of plot, action, character and behind-the-scenes wizardry to maintain the quality. "Evolution, Part 2" didn't quite live up to the potential but it certainly had its strengths, among them the Daniel / Bill Lee (yes, he has a first name!) plot-line, Raphael's journey into madness, and Jack managing to be serious for a whole episode.

So, where to begin? With torture, I think. There doesn't appear to be a set line on SG-1 that says, "This is what we'll show, and this is what we'll imply" when it comes to dolling out the hurt to the good guys. We saw Teal'c hanging from shackles in Season Four's "The Serpent's Venom" while the bad guys jabbed him repeatedly with a pain stick. Jack was tortured with knives and acid in "Abyss," and there was no fear of showing both the act and Jack's reaction to the pain he was in.

On the other side of the fence, "Orpheus" had a screaming Teal'c tortured off-screen. And in "Evolution, Part 2" there is plenty of threat and plenty of aftermath, but it's left up to the audience to imagine what happened to Daniel and Bill.

Strange as it may sound, the pendulum swung too far to the side of propriety this time. We were told that Daniel and Bill had been given no food or water for several days. It was implied that nasty things were happening, involving electricity and the odd punch or two. But what we saw of that involved Daniel, yet Bill was the one who broke. He must surely understand the importance of the mission he and Daniel were on, and while I can understand that the one without the experience of torture was the one who gave in, there simply wasn't enough shown to convince me that Bill would tell "everything."

So on to Burke, and an issue I have with the story. Having waxed lyrical about Peter DeLuise's master characterization in "Orpheus," I'm somewhat stymied when it comes to the Burke sub-plot. Here we have a great opportunity to learn more about Jack, about his past, about his motivations. So what do we discover? Well, we find out he knows at least basic Spanish, but that's sneaked in under the radar. We learn that he was once on a mission with a rather annoying individual who then shot their teammate, for reasons known only to himself. Burke blames Jack for his current assignment. Burke feels guilty. Burke has "some issues." Burke thinks Jack doesn't trust him. Burke, Burke, Burke.

While these two were meandering through the jungle looking for all the world as if they're on an afternoon ramble rather than a rescue mission, was there really no time to learn about Jack? It seems not. Considering how little of Jack we see these days, having his screen time taken up by playing straight man to a prattling eccentric in whom we simply aren't interested seems rather a waste.

And then there are the nitpicks -- those little things that demonstrated an unusual lack of attention to detail. The guide, Rogelio, was found alive, clean-shaven, bright-eyed and bushy-tailed, nary a mark on him, having spent several days without food or water after being shot. Jacob says one particular super-soldier is the third one he's seen -- how does he tell them apart? Sam is hit in the face and lands on her left side, but her right arm is in a sling. Bra'tac says he'll hide the ship in a low-lying chasm on Anubis' planet, when in fact they hide on the dark side of a moon. I could go on.

By now you're probably wondering if there was anything about this episode that I liked. Absolutely. First on that list would be the father-daughter interaction between Jacob and Sam. Those two just ooze chemistry, their concern for one another's well-being obvious. Teal'c and Bra'tac aren't too shoddy in the chemistry stakes either, though there wasn't as much of them to see.

Jacob / Selmak's courage (or was it desperation?) in volunteering to walk through the gate to Anubis' planet even when he was unsure that the super-soldier's suit would keep him alive was indicative of the urgency of the Tartarus mission. The S.G.C. and its allies absolutely had to discover how much of a threat Anubis is. The discovery of a vast army of genetically engineered superior soldiers was both shocking and worrying. As noted, Anubis is making good use of the knowledge he extracted from Jonas Quinn's mind ("Homecoming"), and the implications for Earth aren't good. Sure, the audience was thwacked over the head by Hitler references ("Hail, Anubis," the "S.S.," the perfect soldiers ...), but despite that the underlying hum of menace was present.

I mentioned earlier that the Daniel / Bill plotline was great, and that was mainly due to the convincing portrayal from both actors as frightened, desperate, battered prisoners. Raphael's progression from rational man with a purpose at the start of this two-parter into frenzied desperado by the end was completely convincing.

Honorable mentions go to: the camera operator for Daniel and Bill's escape run; classic Daniel hiding Bill and leading their kidnappers away; classic Jack shooting all the bad guys he can see, then checking for further threat before asking if Daniel is alright; Siler cracked a joke!; Sam and Dad, Dad and Sam -- okay, so I may have mentioned that part before ...

I liked "Evolution, Part 2." Its lack of coherence at times, as well as other issues, means it doesn't score as highly as part one, but it is still an above average episode.