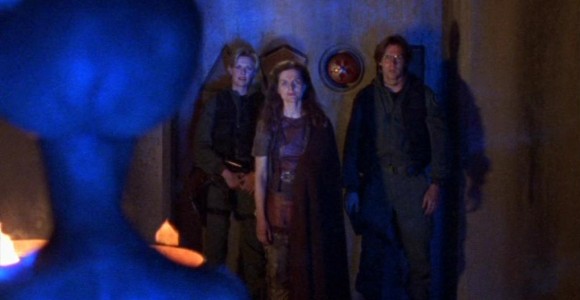 SG-1 returns to Cimmeria, and finds that without protection from the Asgard the planet has been invaded by the Goa'uld.

The S.G.C. receives a signal from Cimmeria, a planet under Thor's protection, and send a probe through the Stargate. The probe reveals a group of dead Cimmerians, plus Gairwyn – who pleads for help. The Goa'uld ("Ettins" in their native dialect) have now come to Cimmeria.

SG-1 travels through the gate to the planet to set things right, since they were responsible for destroying Thor's Hammer, an Asgard device left on the planet to keep the people safe from the Goa'uld ("Thor's Hammer"). They learn that the invading System Lord is Heru'ur, son of Ra and Hathor.

Gairwyn takes the team to the grave site of Kendra, a woman who had previously been possessed by a Goa'uld and freed by Thor's Hammer. With her grave is Kendra's possessions, including Goa'uld technology: a hand device and a healing device. Captain Carter puts on the hand device and discovers that she is able to make it work, because she was once joined with the Goa'uld Jolinar.

While O'Neill and Teal'c join the Cimmerians in fighting off the enemy forces, Gairwyn takes Jackson and Carter to the Hall of Thor's Might – a hidden lair where the holographic image of Thor appears to them. It is a system of tests set up by the Asgard to tell them when the Cimmerians had come of age. The three solve the riddle, revealing the holographic warrior to be an interactive transmission of an Asgard – named "Thor."

After informing Thor that the hammer device was destroyed, and pleading for help, Carter and Jackson are returned to the planet surface. Gairwyn disappears. With no Asgard weapons to be found, SG-1 is forced to surrender to Heru'ur's forces ... until a gigantic ship appears through the clouds. It is Thor's chariot, an Asgard mothership – rarely seen, but spoken of in Jaffa legend. The ship removes the Jaffa and the Goa'uld pyramid landing platforms, as Heru'ur escapes alone through the Stargate.