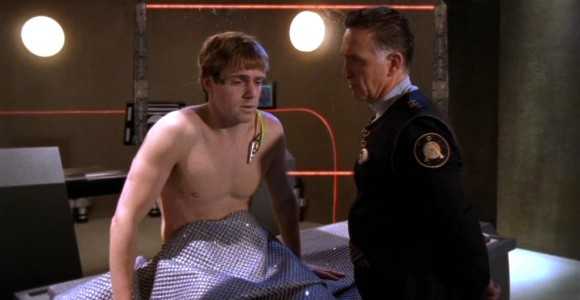 O'Neill, Carter and Jackson awaken from stasis in what appears to be the S.G.C. – almost 80 years in the future – and are asked to recall key events from their journeys.

A long metallic container is raised from a pool of chemicals, as personnel move to revive the occupant from his cryogenic freezing. The container slides open, and inside is a dazed and confused Jack O'Neill. "It's okay, Colonel O'Neill," one man says. "You're going to be fine." The year is 2077, says the man. All of O'Neill's team – and everyone he ever knew – is dead.

The man is Major General Trofsky, and he and Dr. Raully connect a Tok'ra memory device to Jack's temple and ask him to recall events from his past. Who might be capable of defeating the Goa'uld? Who would have the technology to freeze Colonel O'Neill and send him back through the Stargate? (He was held in cryo-stasis for nearly 80 years because Earth did not have the technology to safely revive him. Captain Carter, Teal'c, and Dr. Jackson were sent back already dead.)

There are now 28 SG teams operating from Earth, Trofsky says, plus another 10 on off-world colonies. Earth's outpost worlds are at war with the Goa'uld, and losing. The S.G.C. needs any information Jack can provide on who might be able to help them.

O'Neill recalls past encounters with other species, which are holographically displayed by the memory device. The Nox had the ability to heal people from the dead, and to make things (even their huge, floating city) invisible ("The Nox"). The Asgard protected the planet Cimmeria from the Goa'uld ("Thor's Chariot"), and removed the Ancient's knowledge from Jack's brain ("The Fifth Race").

He also remembers Heliopolis – an ancient meeting place of four great races in the universe ("The Torment of Tantalus"). The Asgard would later identify these four as the Nox, the Asgard, the Furlings, and the Ancients – the builders of the Stargates.

Elsewhere in the facility, General Trofsky and Dr. Raully bring another tube out of the cryogenic freezer. It is Dr. Jackson, alive and well. He, too, is told that his teammates are dead. The deception unfolds still further when Captain Carter is awoken in another room, and told the same.

Carter and Jackson, implanted with the same memory devices as O'Neill, recall past events from their travels. Dr. Raully is surprised to hear Sam tell her that Apophis is dead. She tells her of his defeat in orbit of Earth ("The Serpent's Lair"), and of his death at the S.G.C. ("Serpent's Song").

Back at the real S.G.C., the year remains 1999. Teal'c awakens with Dr. Janet Fraiser and General Hammond at his side, having been in a coma for three weeks. He recalls that SG-1 was attacked by a mixture of Horus and Serpent guards (a very unusual combination) immediately after stepping through the Stargate. He wishes to return to the planet to search out his friends, but Hammond won't allow it. Whoever took the others is long gone by now, and the S.G.C. has already used a considerable amount of resources in the fruitless search.

Teal'c refuses to give up, and will not be a part of Earth's Stargate program without O'Neill and the others. He quits the program and returns to Chulak, where he hopes to raise an army of Jaffa against the Goa'uld. Hammond refuses to let him leave, but ultimately cannot stop him.

Jack O'Neill unhooks himself from the tubes delivering sedative to his body, and remains conscious enough to overhear Trofsky and Raully speaking to one another in an obviously Goa'uld language. He senses the deception, and overpowers the orderly. Jack takes the man's clothes and escapes.

He discovers that the mock-up of the S.G.C. only goes so far. He soon arrives at a part of the base that reveals it to be Goa'uld in nature. Exploring further, Jack find Captain Carter and frees her. The two find Dr. Jackson, and evade the Horus and Serpent guards as they find the gate room.

The Stargate, of course, is fake. Jackson asks who would have enough knowledge of the real S.G.C. to be able to reproduce it in such detail. His question is soon answered: Hathor appears out of no where, and SG-1 is surrounded by guards.

Having escaped from Earth when SG-1 thought she was dead, Hathor has been quietly rebuilding her forces in order to move against the Goa'uld System Lords. (She has lured her guards and Jaffa from the remote outposts of her enemies.) But, having been imprisoned on Earth for the past 2,000 years, she has very little knowledge of the state of the empire. She needed SG-1's knowledge. They, of course, refuse to tell her how to contact the Asgard, or how to get past the iris guarding Earth's Stargate.

But she will have what she wants. A Goa'uld has recently matured, and Hathor holds the parasite before SG-1. "Our friend here is ready for a host," she says. "Which of you shall it be?"