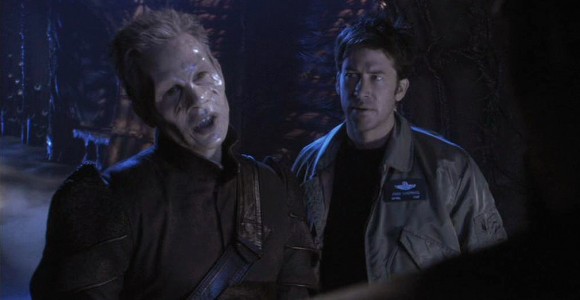 The team desperately attempts to stop two Wraith hive ships from reaching Earth. Sheppard must rely on an old foe to rescue McKay and Ronon.

On board a Wraith hive ship, Dr. Rodney McKay and Ronon Dex have been captured and cocooned ("Allies"). During the battle, Colonel John Sheppard flew his F-302 toward one of the hive ships just as it entered hyperspace. He has managed to jump along with it by attaching his ship to the outer hull. With limited air and resources, Sheppard must decide how to disable both hive ships before they can reach the Milky Way.

Luckily, the hive ships are largely organic in their structure. They suffered heavy damage in the battle with the Daedalus and the Ancient warship Orion. Complicating matters for the Wraith, interstellar radiation from hyperspace forces them to stop, make repairs, and let the ships regenerate for many hours in the void between Pegasus and the Milky Way. Dr. Radek Zelenka calculates that there is at least 15 hours of time necessary for those repairs.

Dr. Elizabeth Weir asks a reluctant Colonel Steven Caldwell to launch his ship and the Orion as soon as possible in an attempt to rendezvous with the hive ships. Major Lorne is put in command of the Orion, which is still in no condition to fight. Repairs will have to be continued on the way to the battle. Caldwell realizes that he may have to make the sacrifice of himself and his crews to stop the Wraith from ever making it to Earth. Moreover, these particular Wraith are the only ones who know where Earth is. That knowledge has to be erased from the species by destroying the hive ships.

Dr. Weir's mismanagement of the situation demands answers from her civilian superiors. The International Oversight Advisory demands her recall to answer for her actions, and so Major General Landry asks her to step through to Earth during a routine check-in with Stargate Command.

Reluctantly, Weir leaves Atlantis during the crisis and meets with Richard Woolsey and other representatives of the committee. While there, finger pointing is the name of the game. They don't really want to fire her, but they have to appear to take action. If they relieve her, it is they who will ultimately take responsibility for calling off the desperate bid by the Daedalus and the Orion to reach the two hive ships in time. Realizing the quandary and political ramifications, Weir accepts full responsibility and commands Caldwell to proceed.

On board the hive ships, Ronon and McKay manage to free themselves from their cocoons. Since McKay knows the ship's schematics, the two set off to do as much damage to vital systems as possible before they can be caught again.

Sheppard tries to contact them via radios, but their devices are in a lab where the half-human Wraith, Michael, is cooling his heals. Michael did not completely regress back into being a wraith after ceasing treatments with Dr. Carson Beckett's retrovirus, and now he is an outcast among his original species. Realizing his days are numbered, he answers Sheppard with the communicator. Michael needs an escape and the humans are his only hope, so he offers to help. He directs Sheppard where to launch his missiles to do the most damage. When Darts pursue and disable Sheppard's ship, he is taken into custody aboard the hive.

Michael, pretending to be on assignment by the Hive Queen, manages to take Sheppard away from his captors. He returns the human's weapons and equipment before they go to find McKay and Ronon. When the Daedalus and Orion enter battle with the hive ships, the four manage to beam off their escape craft to the Daedalus.

During the battle, Major Lorne's command of Orion is short-lived as the craft is destroyed. All of the crew manage to beam on to the Daedalus in time. However, there isn't enough air for everyone, and more is venting into space. The only hope for everyone's survival is the air on the one remaining damaged hive ship. But it is filled with Wraith.

Thanks to Michael, the team realizes that canisters of Dr. Beckett's retrovirus are still on board. Because of the damage to the Wraith vessel, they can beam the canisters over and release it as gas. The plan works, and the gas turns the Wraith into humans whose memories are completely wiped. The Queen is the only one unaffected. Sheppard takes a boarding party over to check and secure the ship for the Daedalus, neutralizing the Queen.

Earth forces are now in possession of an adequate oxygen supply, as well as a functioning hive ship.