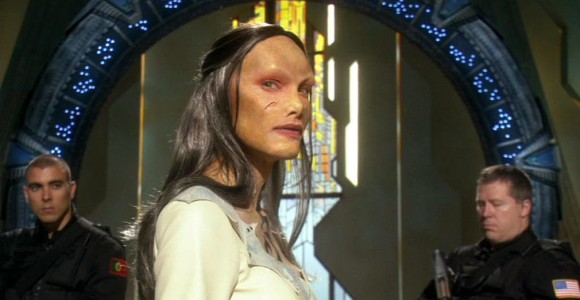 Michael and his Wraith faction arrive at Atlantis to propose an alliance, hoping to use the retrovirus to transform their Wraith enemies into prey.

A Wraith hive ship detected on approach to Atlantis a few weeks ago ("Inferno") arrives and radios a message. The Wraith address Dr. Elizabeth Weir by name. She concludes that Michael is on board and has informed these Wraith that Atlantis is still intact on the planet ("Michael"), as the Wraith have believed for months that the city was destroyed ("The Siege, Part 3"). Michael is a Wraith that Weir's people recently captured as a test subject, using Dr. Carson Beckett's retrovirus to transform him into a human.

Weir's response is routed through the Daedalus to disguise exactly where the city is located. Michael, transformed more back to his Wraith appearance, appears on the monitor. He informs her that because the Wraith woke up too soon, there are too few humans to feed upon. And since they can't find Earth, the perfect new feeding ground they hoped for, the Wraith now have a civil war on their hands. Michael proposes an alliance to turn enemy Wraith into humans using the retrovirus; then they will feed on their Wraith enemies, and not on humans. And they will also share the secrets of Wraith ships and technology in exchange.

Dr. Weir decides that with the Daedalus and the Orion (a recently discovered Ancient warship) on hand, plus a new supply of Ancient drone weapons, the city can repel one lone hive ship. But she is suspicious.

As a sign of good faith, Michael sends a data burst detailing the Wraith jamming codes established before the war – information that will allow the Daedalus to defeat enemy counter-measures and beam nukes onto target ships ("The Siege, Part 3"). He warns them not to try to destroy his ship or he will alert all the other Wraith to Atlantis's continued existence. After conferring with Sheppard's team and Colonel Steven Caldwell, Weir decides to work with these Wraith. Teyla is very apprehensive, believing the Wraith are treacherous.

The Wraith Queen and her lieutenants come down to the city to begin tests on the retrovirus. Working with a Wraith scientist, Drs. Beckett and Radek Zelenka discuss the problems of disseminating the retrovirus using aerosol gas or explosive pheromone delivery systems. Currently, the scientists do not know how long it will take to work once it reaches the necessary systems. If it isn't done quickly, the affected ship will open fire on Michael's ship when they use it.

The Wraith Queen explains that, if they are successful, a balance will be established for many generations between the humans and the Wraith of the Pegasus Galaxy. By feeding on other Wraith, they will diminish their own numbers. Hence, the humans of the galaxy will know peace for a long time. But, she wants a demonstration. The retrovirus is tested on one of her own men, and he transforms into a human. The Queen mercilessly feeds on him and declares the test a success. Beckett is wracked with guilt and the others are appalled. Certainly their plan does not come without its ethical dilemmas.

The Queen wants to next test the weapon on an enemy ship, under the pretense of negotiating her own surrender. McKay must devise a system for synchronized release of multiple canisters, which will be planted throughout the ship. Weir demands that her own people observe the attack to make sure the Queen sticks with the plan. But Sheppard and Caldwell worry that the whole attack is premature.

As they feared, the mission is a failure and the hive ships open fire on each other. The so-called friendly Wraith ship takes serious damage, so the Daedalus enters the battle to defend it. Michael's ship makes a hyperspace jump to safety. Back in the city, the Queen angrily demands a better delivery system since her delegation was searched and destroyed before they could place the canisters.

In Atlantis, the McKay and the Asgard Hermiod break the Wraith jamming codes by trial and error. Thinking that he is calling the Queen's bluff, McKay demands all the specifications of a hive ship in order to make an effective delivery system. Much to his surprise the Queen quickly complies, sending all specifications for virtually all Wraith technology. McKay examines the data and discovers that the ships are of organic construction and can heal themselves, for the most part. Repair crews known as Keepers are no longer available, having made their own alliances during the civil war. So, McKay and Ronon go to the hive ship to take readings.

Rodney determines that the CO2 scrubbers are the most effective spot to release the gas; one big canister should do it. So McKay and Sheppard propose flying the Daedalus in the shadow of the larger hive ship to fool the enemy sensors. If they can get close enough to another enemy hive, they can now beam in the gas canister. McKay volunteers to observe in order to continue hacking into the Wraith systems. He has programmed a remote transport device, which he can use to beam out at the first sign of trouble.

When the Daedalus exits hyperspace at the given coordinates, two Wraith ships are lying in wait and begin to attack. In the battle, Caldwell can't get close enough to get McKay and Ronon off the Wraith ship – and McKay's devices don't work as promised. He and Ronon are taken prisoner. Sheppard tries to disable the Wraith ship using an F-302 fighter craft, while Hermiod discovers the jamming codes have not been broken after all – so he cannot beam over a nuke. The hive ships jump to hyperspace. Sheppard's fighter is nowhere to be found.

Back in Atlantis, Zelenka discovers that a computer virus has deleted all the data provided by the Wraith. Worse, it data-mined Atlantis computers and transmitted two things to the enemy: the "Aurora" mission reports and the coordinates of every world in their database. As a result, McKay and Ronon are on the hive ship now on a course for Earth.