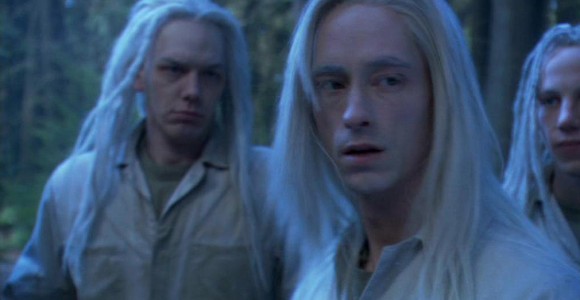 The Atlantis team must decide the fate of a colony of Wraith they have turned into humans. Dr. Weir must defend her leadership when she is evaluated by the I.O.A.

When a Wraith hive ship is detected on approach to Atlantis, Dr. Carson Beckett is deployed to the Ancient's drone weapon chair, prepared to fire on it. On Earth, Dr. Elizabeth Weir receives the report and authorizes the cloak to be engaged from her position at Stargate Command. She has been recalled to answer questions on her failure to contain information about Earth from the Wraith. Fortunately it is Lt. Colonel John Sheppard and his team who is aboard the hive. Back on Earth, Richard Woolsey of the I.O.A. informs Weir that she is temporarily approved for command while he makes an investigation on site in Atlantis.

As a result of using Dr. Beckett's iratus bug retrovirus on the Wraith hive ship defeated in the void between the galaxies, Atlantis has prisoners of war: Wraith turned into human beings with erased memories ("No Man's Land"). Because keeping them in stasis on board the hive ship consumes so much power, a P.O.W. camp is established on a planet with no Stargate. The problem with making Wraith into humans is that they must receive regular injections of Beckett's treatments or they will revert into Wraith. Therefore the doctor is compelled to remain with them for the time being.

Among the P.O.W.s is Michael, recently reconverted by Beckett into a human. He had been on the hive ship when Ronon Dexand Rodney McKay were captured. Knowing that his own people didn't trust him anymore (they felt he was not entirely a Wraith), Michael decided to help the Atlantis humans in return for sanctuary. Initially, they gave it to him. But he was frustrated by his limited freedom. Ronon was ordered to stun and subdue him while Dr. Beckett injected the retrovirus – and Michael Kenmore was resurrected anew.

However, Lathan, one of the human-Wraith, is beginning to remember bits of his past. He is sure that the truth is being kept from his group. Michael tries to reason and console him, but the man slips out of camp, wishing to to avoid the next scheduled medical treatment for the "plague" for which Beckett is ostensibly treating them. Out in the woods, he begins to revert.

Once the man is discovered missing, a search party of human-Wraith confront him. He tries to tell them that they are being deceived. Instead, the others kill him and leave the body at the base of the ridge in a posture meant to resemble suicide.

Woolsey's investigation asks pointed questions concerning the many decisions made concerning the Wraith. He interviews Sheppard over the decision to create the 200 Wraith-human community on the P.O.W. planet. He objects to Weir, who tells him that Woolsey is more likely to help them than anyone else at the I.O.A.

Dr. Beckett follows the Wraith to a gathering in the woods. They have also begun to revert. Michael discovers him. His Wraith features are returning, and most of his memory is back – enough to know he's been betrayed twice. They waited until Sheppard left with the soldiers so that only the medical staff was present to make their move. These reverted Wraith have focused their communicative energies to contact a hive ship, which is now on the way.

Woolsey points out the problem of leaving the Wraith-humans to be found by other Wraith. Knowing what was done, they would know Atlantis still exists, and Michael knows how to find Atlantis – and Earth. This secret must be protected.

Sheppard is forced to return and deal with the Wraith with nukes. The Daedalus is not operational enough to make the strike on the camp, so he chooses to use the captured hive ship. The only individual remotely capable of controlling it is Teyla because she possesses some of the Wraith gene. Having the gene means she can activate controls others can not. When the craft reaches orbit, secondary systems come online because other Wraith life signs are detected. McKay realizes some of the prisoners have reverted. By acting together, they have managed to call their brethren.

Michael interrogates Beckett in the hopes of discovering any backup plan left behind by Sheppard in case something goes wrong while he's away. He learns that all Sheppard has to do is send a signal to activate a nuke in the camp. Hoping to save Beckett and the guards, Sheppard takes a Puddle Jumper to the planet to deposit the nuke himself.

The team arrives to find only Dr. Beckett alive. They make it to the Jumper and tell McKay to detonate the nuke. Nothing happens. Michael has deactivated it. Sheppard orders a strike from the captured hive ship. At that moment, another Wraith hive arrives and fires on Sheppard's hive. They cannot be certain they've eliminated everyone in the encampment on the surface.

Later, the Daedalus arrives to see only debris from the captured hive ship. No life signs are on the planet. Sheppard and his team managed to escape their destroyed hive ship cloaked in the Puddle Jumper. They dock with the Daedalus and depart.

Woolsey returns to Earth to report on his findings to the I.O.A. He will recommend that Weir remain in command. In fact, he intends to slant his reports in her favor.