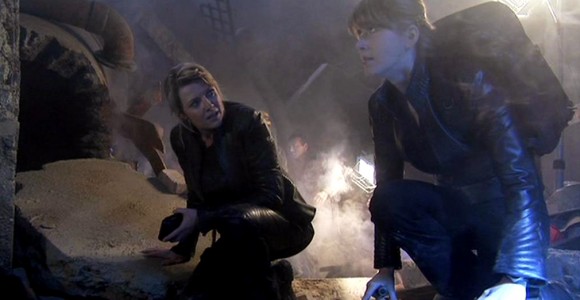 After a conflict with Michael leaves several Atlantis personnel trapped, Colonel Carter leads a rescue mission – unaware that Michael is still nearby.

Lt. Colonel John Sheppard and his team, along with other military personnel from Atlantis, have fallen victim to Michael's booby-trap. They have discovered the lab where the Wraith was going to bring Teyla to have her baby, but got there before him. When Dr. Rodney McKay accessed Michael's computer system, he triggered an implosion of the entire facility ("The Last Man").

When the dust settles, most of the soldiers there to rescue Teyla are dead. Colonel Sheppard, however, is alive, pinned beneath fallen support beams. A metal rod has pierced his side. Ronon Dex, relatively uninjured, pulls the rod out before making several unsuccessful attempts to free Sheppard.

Dr. McKay regains consciousness to find himself intact, but confined to a small space in a pocket under the rubble. Major Lorne is with him, with a broken leg. To stave off claustrophobia, McKay plugs his laptop into a hard drive fragment from the Michael's mainframe computer. He discovers building schematics, a list of planets, and medical research data. Lorne tries to reassure him that the Daedalus is only a few hours away, and can transport them out. He also hopes Lt. Edison, posted at the entrance to the compound, has escaped and reported back to Atlantis.

Slightly injured, Edison does make it back to Atlantis via the Stargate. Colonel Samantha Carter dispatches search and rescue teams in jumpers. They quickly locate and dig out McKay and Lorne – but the other two life signs are buried much deeper. When McKay realizes that the booby-trapped computer sent Michael a message before initiating the self-destruct, Carter sends a Jumper into space to keep watch.

Upon receiving the alert, Michael sets course for the destroyed lab, intent on capturing anyone who remains alive. En route he examines Teyla, who is soon to give birth. Her son will be his instrument of change in the galaxy, he tells her. Teyla realizes that Michael will kill her once the baby is born, and pleads with the baby's father, Kanaan, to save them. But Kanaan fears what Michael will do if he helps her.

Before Ronon and Sheppard can be dug out of the rubble, Michael's ship arrives in orbit. He activates the Stargate to prevent anyone from escaping. Newcomer Captain Alicia Vega handily takes out a scout Dart with an M4 rifle, and Carter orders everyone into the cloaked jumpers – where they will await the arrival of the Daedalus. Dr. Jennifer Keller points out that Teyla is likely aboard Michael's orbiting hive ship.

Hearing the sounds of digging, but not knowing who is attempting to reach them, Ronon continues to try to free Sheppard. When they call out to the excavators, a wary Sheppard realizes they are Michael's hybrids. He and Ronon plan to go down shooting.

The Daedalus jumps in, and Carter sends a coded transmission alerting them to Teyla's presence on Michael's ship. To Kanaan's dismay, Michael decides to abandon his Darts and flee, but the Daedalus's Asgard weapon takes out the hive ship's hyperdrive. Michael must turn and fight after all.

Sam convinces the ship's commander, Colonel Steven Caldwell, to lower the ship's shields in order to beam up Sheppard and Ronon – taking the damage Michael's hive is sure to inflict. Lowering her shields, Daedalus beams up the men just as the hybrids reach them. The cloaked Jumpers are also taken aboard, but not before Daedalus loses her Asgard weapons, hyperdrive, sub-light engines, and 50 percent of life support systems due to Michael's attack.

With the shields back up to protect them from the hive ship's constant weapon's fire, and Michael's hyperdrive out of commission for the time being, the two ships are at a stalemate. Carter and McKay join the repair effort while Keller examines a seriously injured Sheppard. He needs a transfusion and surgery immediately, but Sheppard refuses. He has been dreaming about Teyla and another friend he failed to rescue – Lt. Aiden Ford ("The Hive"). Sheppard will not abandon Teyla the same way, and wants to lead a rescue op over to Michael's ship.

With Teyla so close, Sheppard and Ronon concoct a rescue plan. A diversionary F-302 attack, targeting the hive's weapons, would allow a cloaked Jumper with a rescue team to board when Michael opens his bay doors to launch Darts. Colonel Carter questions Sheppard's physical condition, but he insists on going – even if it results in a court martial. She backs his plan when Colonel Caldwell dissents.

Once aboard Michael's vessel, McKay quickly locates Teyla. He also determines that the ship's hyperdrive is almost repaired. When the team reaches Teyla, her contractions are close together – her son is about to be born. Sheppard and Ronon head off to prevent the hyperdrive from being fixed, leaving Rodney alone to help Teyla. As they plant a C4 charge on the hyperdrive, Sheppard struggles through his nearly debilitating injury.

Meanwhile, Teyla enters full labor, and convinces Rodney that he must deliver the child.

Michael realizes someone is on board when the explosion knocks out much of the ship's power. With much reluctance McKay delivers the baby, and even manages to cut the umbilical cord. He hands the crying newborn to Teyla as Sheppard and Ronon return. With Ronon carrying mother and baby, they race to the Dart bay – but cannot locate the cloaked Jumper. As McKay prepares to contact the Daedalus, Kanaan finds them.

Showing him their baby, Teyla begs Kanaan to help them escape. He arranges for them to use a Dart. Sheppard puts everyone except the baby in the Dart's storage and contacts the Daedalus. Caldwell suggests they return to Atlantis via the Stargate while he destroys the hive ship with the repaired Asgard weapon.

Back in the Atlantis infirmary, Teyla thanks Sheppard for rescuing her. She decides to name the baby after her father and Sheppard – Torren John Emmagan – just before Sheppard is wheeled off for his much-needed surgery.

Meanwhile, Carter says goodbye to McKay before gating back to Earth. The last Baal clone has been captured, she tells him, and the Tok'ra want SG-1 present when they remove his symbiote (Stargate: Continuum). The I.O.A. also wants to conduct an exhaustive review of her first year in command of Atlantis. Greeted at the S.G.C. by Richard Woolsey, Carter is informed that she has been relieved of her command. As she digests the stunning news, he adds that he is going to replace her as the commander of the Atlantis expedition.