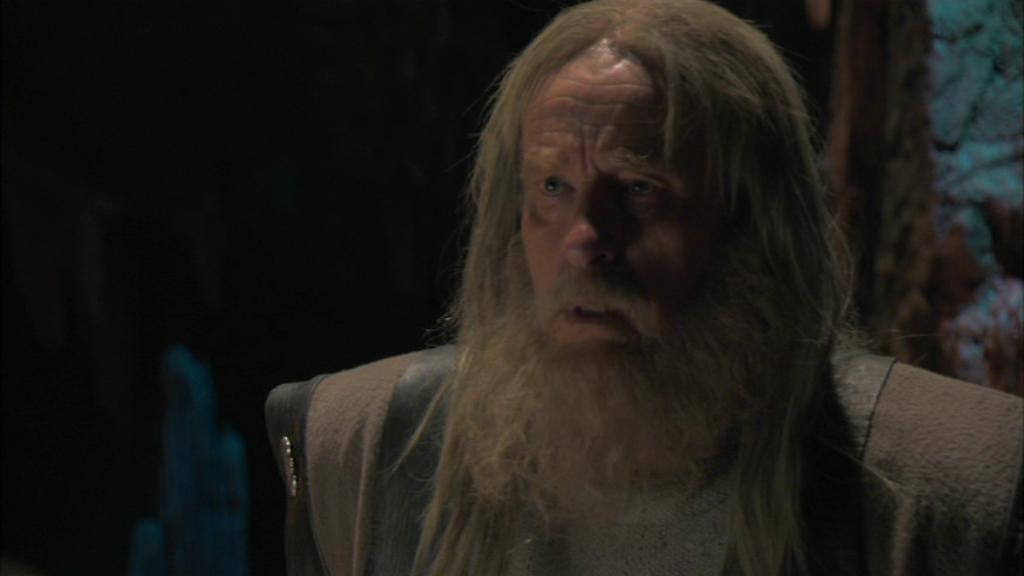 Ancient leader and scientist, who contravened the wishes of the ascended Ancients and developed powerful technologies to fight against the Ori. He was among the group of Lanteans who returned to the Milky Way Galaxy from Atlantis some 10,000 years ago.

It is believed that Merlin was born Moros, a mortal Lantean, and rose to a position of leadership in the city of Atlantis. After a century of war with the Wraith, he was among those who decided to give up, sink the city beneath the ocean, and return through the Stargate to their ancestral home on Earth (approximately 10,000 years ago). Soon after he and many others discovered how to ascend, and Merlin lived in that state for thousands of years.

As an ascended being he became aware of the power and real threat of the Ori, the Ancients' distant ancestors who lived in another galaxy but had also ascended to the higher plane. Set on defending his people from this inevitable threat, Merlin retook human form around the fifth century A.D. He formed the Knights of the Round Table with young Arthur, his Ancient powers appearing as powerful magic in medieval Britain. The myth of Merlin grew.

Merlin used his knowledge to create various pieces of technology, including a computer interface that shifted him and his controversial research into another dimension, out of the watchful gaze of the ascended beings. There he engineered a weapon capable of wiping out even ascended beings, intending to use it on the Ori. The Sangraal crystal would power the device. (Merlin also carved a tablet with an Ancient cipher leading to Avalon, an item that eventually made its way off the planet and into the hands of an associate of Vala Mal Doran (perhaps Arlos), who she subsequently stole it from.)

The Ancients sent Morgan Le Fay to watch Merlin, and to stop him if he went too far. She eventually stopped him from completing his work, but instead of killing him secretly locked him away in stasis on another planet. There SG-1 found him, some 15 centuries later, and revived him. Merlin gave Daniel Jackson the knowledge to complete the anti-Ori weapon (even depositing part of himself in Daniel's subconscious) before dying.

Avalon, Part 1 - Merlin, a hologram, appears to SG-1 and Vala Mal Doran, instructing them to prove themselves worthy for the treasure to be revealed.
Avalon, Part 2 - Merlin's hologram reappears after SG-1 defeats a series of challenges in the Glastonbury cave.
Arthur's Mantle - SG-1 studies a device invented by Merlin to displace himself into a parallel dimension, in order to hide his controversial work from the ascended Ancients.
Camelot - SG-1 finds another Merlin hologram in the village of Camelot, while searching for the Sangraal -- the key to a device Merlin reputedly created, capable of destroying the Ori.
The Pegasus Project - Daniel and Vala find Moros's image in the Atlantis database, and confirm that they believe him to be Merlin.
The Quest, Part 2 - SG-1 finds Merlin, who teaches Daniel how to build the anti-Ori weapon, then dies.
The Shroud - With a piece of Merlin still in his head, Daniel completes the anti-Ori weapon and deploys it against the Ori.
Stargate: The Ark of Truth - Morgan le Fay takes Merlin's form to help lead SG-1 to the Ark of Truth, a device capable of ending the war with the forces of the Ori.