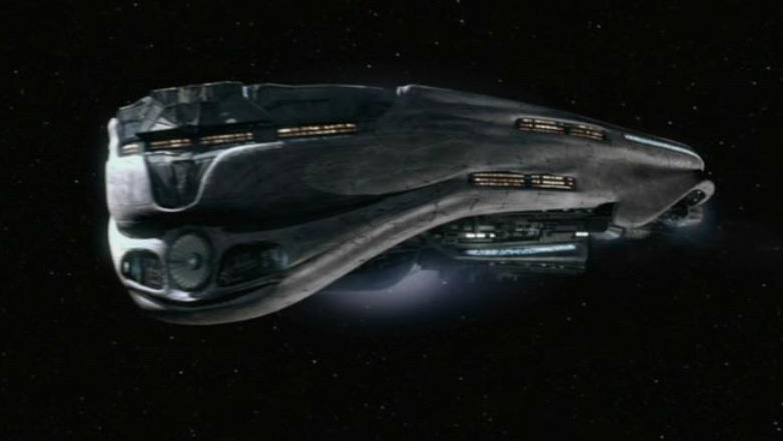 Massive Ori star craft capable of ferrying thongs of Ori warriors and their families into territories occupied by nonbelievers. its power source is not known. Activation is required by a Prior.

The warship's primary weapon, a parabolic indentation at the forward section of the craft, launches bursts of energy very similar to that of Ori satellite technology. These are fully capable of destroying Goa'uld Ha'tak-class motherships with a single shot. Smaller "pulse" weapons can fire from the ship at any side. Enough of these can also destroy a Goa'uld mothership.

Propulsion appears to be achieved via a ringed device which occupies the aft section of the craft. Powerful Ori shields protect the ship from all known forms of weaponry.

Living quarters appear to be located at the fore section, above the weapons array.

The command center of the vessel, the bridge is maintained and flown by a Prior. At the center of the room sits a chair, not unlike the command interface which operates the Ancient defenses in Antarctica and Atlantis. The port side of the room includes numerous panels, as well as hardware which is compatible enough with Ancient hardware to be interfaced with Earth computers. The Orici herself is able to fly the ship remotely in the event the Prior becomes incapacitated.

Little is known regarding the propulsion behind Ori technology. However, a core was discovered which appears to be responsible for the crafts ability to motivate itself. It is likely the technology possesses similar traits to Ancient ships such as their city ships, or Ancient warships.

At the very front of the ship is a room reserved exclusively for the Orici. Here she slumbers, is served her meals, and is tended to by servants. An observation portal lies at the forward section of her chambers, where she may look out onto the planet on which the craft has landed, and to issue commands to her subordinates. It is possible all Ori warships possess the same chamber for the Orici.

Each Ori warship contains at least one chapel for ceremonial purposes such as Prostration. A large, bound copy of the Book of Origin sits upon a great altar at the center of this room. The chapel it likely secondary to the mission objectives of the Orici and her soldiers, who likely forgo Prostration in the event a battle of ground assault is ordered.

Living space is provided for all personnel aboard Ori warships. Married couples are allowed to reside together. Single soldiers may possess only bunks and live in crew barracks, though this is not known.

Crusade - Members of the anti-Ori underground witness the activation of several Ori warships to throngs of cheering followers.
Camelot - Four Ori star craft enter the Milky Way via an outgoing Supergate, devastating an armada of Human, Tok'ra, Free Jaffa, Lucian Alliance, and Asgard vessels.
The Pegasus Project - SG-1 manages to destroy a mothership, with Teal'c luring it in front of the Supergate in time for a massive kawoosh to form.
Counterstrike - Adria's mothership attacks Dakara, destroying the Ancient weapon and the Free Jaffa capital.
The Shroud - Daniel and SG-1 hijack an Ori mothership, sending it back through the Supergate with Merlin's weapon -- activated to try and wipe out the ascended Ori.
Unending - Ori ships pursue Odyssey into the Asgard's galaxy Orilla.
Stargate: The Ark of Truth - When SG-1 takes the Odyssey into the Ori's home galaxy, a fleet of Ori warships try to destroy the Earth ship.