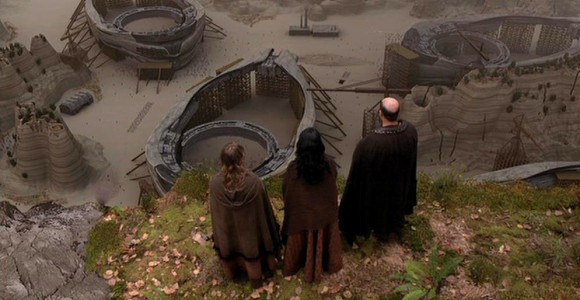 Vala Mal Doran makes contact with Stargate Command from the Ori home galaxy, and tells the story of her life undercover in a village of followers building the Ori's invasion fleet.

A very pregnant Vala Mal Doran, wearing green fatigues, strides purposefully down the corridor of the S.G.C. People greet her and she asks where Colonel Mitchell is. Informed that he's in the men's locker room, she goes in, admiring the many men in various states of undress. She barks at one and whistles at Mitchell. Wearing only a towel around his waist, he is shaving. Clearing the mirror, Mitchell sees Daniel Jackson, not Vala, staring at him with a seductive smile.

When Carter sees Jackson, exhibiting Vala mannerisms, she is pleased. They have been studying the effects of the Alteran communication stones and base terminal (Ancient long-range communication device) Mitchell and Teal'c disintegrated in the Stargate's kawoosh – the device that Daniel and Vala used to inhabit the bodies of two people in the Ori's distant home galaxy ("Avalon, Part 2," "Origin"). Now Vala is able to use Daniel's body to communicate from the Ori galaxy, where she has been living these past several months. She is, in effect, finally in his pants.

Mitchell, Carter, Teal'c, and General Landry listen as Vala, seated at a table where she is video taped, tells her story from the moment her transporter matter stream was drawn into the black hole ("Beachhead"). Landry notes that he and Daniel are to meet with the Russian and Chinese I.O.A. (International Oversight Advisory) representatives in just a few minutes.

Vala reveals that she woke up in a bed in the village of Ver Isca, a place like Ver Eger, where Harrid and Sallis (the people she and Daniel inhabited) lived in the Ori galaxy. A man named Tomin found her unconscious and thought her a gift from the gods. A lame, gentle, sweet, and lonely man, he was smitten with her.

Searching for a way back or a method of communication, Vala encountered Seevis, who served as both barkeep and village administrator. He is their most vehement defender of the religion of the Ori.

When Vala finds herself pregnant, to keep from being burned again, she quickly marries Tomin and convinces him he is the father of the child. In truth she does not know who the father of the baby is. Much to the team's surprise, she tells them that she didn't have relations with anyone and knows of no possible way she could be pregnant by natural means. Mitchell notes that Earth mythology does include such things, including some accounts of King Arthur himself.

Vala continues her story. A Prior has cured Tomin as the Ori conscript their followers in the tens of thousands and have them build ships in preparation for the coming crusade against our own galaxy. Raised from birth to revere the Ori, Tomin states that enemies of the Ori are evil and must be destroyed. Vala concludes that this will be an all-out war and that the warriors will not be swayed nor satisfied with anything less than total victory.

Landry is summoned to the conference room, where Russian officer Chekov and Chinese representative Shen Xiaoyi await. Chekov informs Landry of the Russian intention to take back their Stargate, on loan to the S.G.C. ("Redemption, Part 2"), when the treaty comes up for renegotiation in two weeks.

Vala, in her search for the anti-Ori underground she and Daniel found at Ver Eger, speaks with Denya, a barmaid and harlot at Seevis's bar. She concludes that Denya is a member of the underground – but the woman may not be trustworthy, as Seevis soon accuses Vala of being an unbeliever. He chains her outside in the center of town, where she remains for three days with no food or water. Finally Tomin, after much consideration, defies Seevis and rescues her.

On one of those nights, she has a vision of herself lying in bed, looking up at a fiery, skull-like image manifesting itself on the canopy above her. She later hears a Prior tell Tomin that the baby is not his – but is the will of the Ori.

Needing more information, Vala follows Tomin. Near the shipyard and staging site for the new Ori fleet, Denya and Seevis approach Vala. They reveal that Seevis himself is the head of the anti-Ori underground, and that they chained her up to test her.

Aggravated by Chekov's posturing, Landry cuts to the chase and discovers the new 304, a Daedalus-class ship nearing completion, will buy Russian support of the status quo in treaty renegotiations. In fact, he believes that the Russians have no intention of restarting a gate program; backed by the Chinese, they used the threat to secure their own ship.

Seevis is plotting to destroy the ships when they are activated by the ten Priors from Celestis at an upcoming celebration. Tens of thousands of Ori followers will die (including Tomin), depriving the Ori of those who would fight the crusade. But Seevis's plan fails.

Tomin mentions that the "Day of Reckoning" is at hand – reminiscent of the recent message being preached by Priors in our galaxy. The Priors were only the first wave; the real crusade is about to begin. Vala reports that the Ori fleet is about to launch (from Ver Isca and many other planets) – meaning the Ori have a working Supergate.

Suddenly, Daniel – not Vala – asks what's going on. Communication has been lost on Vala's end. At Seevis's bar, where Vala had been using an Alteran communication device, Tomin has shot and destroyed the device, and kills Seevis and Denya. But Vala convinces him that they forced her to use the device for them, and promises that she hasn't betrayed him. As she must have help with their miracle baby, she will accompany him when he leaves for war.

Carter has the Asgard and Tok'ra search for Supergate activity. The Jaffa have their ships out looking as well. With most resources focused on locating the Supergate and preparing for battle, SG-1 asks for permission to search the address left by Merlin ("Arthur's Mantle") for the weapon designed to kill the ascended Ori themselves. With a nod, Landry sends them off into certain danger.