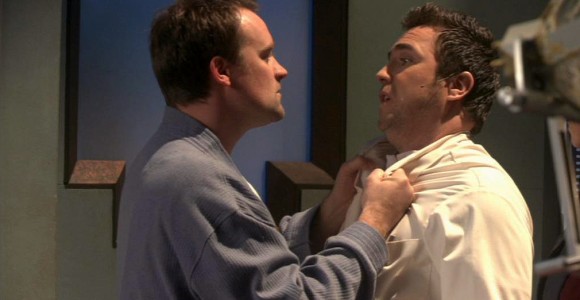 A run-in with a Wraith Dart leaves the consciousness of a precocious Atlantis security officer trapped in Dr. McKay's mind.

A large team from Atlantis is exploring a recently culled world when a Wraith Dart makes its presence known, humming overhead in the distance. Lieutenant Laura Cadman, a security officer patrolling with Dr. McKay and Dr. Beckett, radios an alert to Colonel Sheppard's team. In the sprint back to the Stargate McKay and Cadman are swept up in the Dart's culling beam.

Sheppard's team makes it back to the Stargate. Major Lorne fires an anti-tank missile at the Dart, but the shot hits a tree. Sheppard takes his turn and neutralizes the threat, plowing the ship into the landscape. When Beckett reaches it the cockpit bubble deactivates, and as the Wraith inside attempts to reach for the self-destruct Sheppard kills him.

Sheppard orders Dr. Zelenka to the site in the hopes of extracting the officers from their state in the Dart's data storage. When he arrives, Zelenka realizes there is only enough power to reinstate one of them, but there is no way to tell which because they are merely life-sign blips. Sheppard picks one, and out emerges McKay, who immediately falls unconscious.

McKay and the Dart are brought back to Atlantis. Rodney remains unconscious while Zelenka and his team work to reverse-engineer a stable power transformer for the ship. Eventually he wakes up on his own, and it isn't long before he and Beckett realize a serious problem. Cadman's body may still be trapped inside the Dart, but her consciousness is sharing McKay's body. Rodney isn't aware of her thoughts, but her voice is loud and clear in his head.

When McKay goes to check up on Zelenka and his work Cadman pounds questions between his ears, forcing him to lash out ... apparently at no one in the room. Concerned about his mental health, Dr. Weir orders him to visit base psychologist Dr. Kate Heightmeyer. En route, he runs into Katie Brown and tells her that despite his trip to the infirmary they are still on for dinner the following evening. Katie remains unaware of Cadman's personality inside his mind.

Sheppard checks in on Ronon Dex and asks his plans following his departure from Atlantis. Dex does not believe he fits in with Humans, but he promises to give things a try. Sheppard pits him against some of his best men in hand-to-hand combat as well as tests his marksmanship skills with Earth weapons.

Dr. Heightmeyer suggests that McKay should try and release a little control for once, but in this case, in the form of his body, and for a moment Lieutenant Cadman gains control of his speech and motor functions. But after a few moments he has had enough. Cadman, knowing she can now take over, begins hatching plans.

Back at the Dart, Zelenka forces McKay off the project, saying he is making too many mistakes and will do more harm than good. He returns to his quarters, and while unconscious Cadman takes over, inviting Dr. Beckett to join McKay and Dr. Brown for dinner, and taking a jog before bed. McKay and Cadman wake up at two o'clock the following day – in her quarters. When he finds out what she's done he insists it's time to set boundaries.

McKay shows up in Katie's quarters and is surprised to find Beckett there. It doesn't take him long to realize Cadman invited him for herself. After an awkward toast and a series of stammers she takes over his body again, telling Katie extravagant, loving phrases he could never deliver himself, tipping her backwards and giving her a generous smooch before getting an eye-full of Beckett and departing. Struggling for control, McKay insists they go back, but Dr. Zelenka uses the intercom to call him to the hangar.

Zelenka has found a way to trick the Dart's energy matrix into only taking the power that it needs to initiate the materialization process on a pair of mice. When they re-emerge they have been cooked well-done, and McKay fears he'll be stuck this way forever.

At Sheppard's request Dr. Weir pays a visit to Ronon, telling him she is aware of John's wish to add him to his forces. Dex has been training the troops in various knife techniques he has been using, and tells her he is thinking about staying.

McKay returns to Dr. Heightmeyer, demanding an apology from Cadman, but in the midst of the session he has a seizure. In the infirmary, Beckett reveals that this will continue to happen until one of them decides to "let go." Cadman says it's getting harder and to exist inside his body, and offers to be the one to eventually fade away if Zelenka's tests continue to bring back dead mice.

While awaiting the next attack McKay realizes that the Stargate's purpose is to de-materialize and re-materialize a person. If they plug a gate power crystal into the Darts materialization device it should stabilize the process. He sets up the device in the hangar bay and asks to have a moment with Cadman, but she takes over his body and plants an enormous kiss on Dr. Beckett's mouth. McKay returns in disgust and asks that the procedure commence. Zelenka activates the device and Cadman's body reappears.

Rodney wakes up in the infirmary and finds himself to be alone in his own mind. The process worked, and Cadman is lying beside him. Both are eager to find some time to themselves.