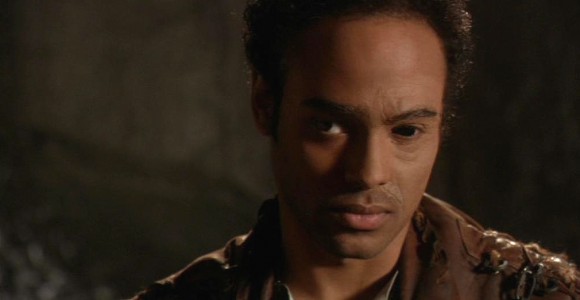 The team is captured by the missing Lieutenant Ford, who is now leading a group of young men who are taking the Wraith enzyme – and who wants the team's help in a suicide attack against a hive ship.

While scrounging a forest floor in search of one of a contact who has reported the whereabouts of a Z.P.M., Colonel John Sheppard's unit is ambushed and shot with a new advanced series of Wraith rifle.

They awaken at a dinner table in a cave surrounded by young men. After Sheppard quips, he hears a familiar laugh, and Lieutenant Ford makes his presence known. Ford encourages eating the food he has placed for them and tells his story. He was not killed after he was taken by the culling beam on P3M-736. Instead, he neutralized and stole several enzyme pouches from the Wraith cruiser he was sent to and swiftly departed the craft.

Ford had dialed an address to a friendly planet where he met men willing to try the Wraith enzyme for themselves. Now he has gathered a small ragtag team of boys intent on delivering serious blows to the Wraith. Their numbers continually growing, they capture Wraith soldiers and imprison them for their enzyme.

One of Ford's associates, Jace, has managed to maximize the drug, and even lace it in food – Sheppard's team's food. Too much already eaten, Dr. Rodney McKay, Teyla and Ronon Dex will soon experience the side effects. Sheppard's plate was intentionally left untouched so that he can be an unaltered witness to later tell Dr. Elizabeth Weir the wonders that it has done for his team. Ford makes it clear that they are not prisoners, and are free to roam the planet.

But they are not free to leave. McKay soon discovers that certain control crystals have been removed from the D.H.D. – a trick he taught Ford – which explains why they are not under surveillance. Already McKay is beginning to feel the effects of the enzyme with hot and cold flashes and a tendency to pace. Teyla and Ronon are not far behind.

Ford intends for Sheppard to see the effectiveness of his team, and instructs his man Kanayo to send Sheppard and Teyla with him on his next mission. While on the planet, Kanayo reveals he was a former Genii spy, which explains how he knows the location of an off-world Genii safe house. One man lost, his team successfully steals back an entire crate of Earth's C4.

McKay spends time with Jace and learns what he has discovered. The Wraith are not a united force, and are fracturing more than originally thought. Because of Teyla's ability to access their telepathic network, each ship is becoming compartmentalized in terms of sharing information. This way, if she or someone with her abilities were to access a ship's telepathic link, only that vessel would be compromised.

When Kanayo and his team returns, Ford and Jace brief Sheppard's unit on their plan. They wish to destroy a Wraith hive ship. One is passing through an area of space, feeding heavily as it does. A hyperspace pause will take it very near to a planet with a Stargate. If they manage to plant the C4 in the Dart bay, utilizing secondary explosions, the hive ship will be decimated with possibly hundreds of thousands of lives (who would've been culled otherwise) spared.

The trick will be getting up to the ship. Ford reveals a Dart they managed to capture, intact, and Sheppard is encouraged to learn how to fly the craft. McKay is floored that he is considering the possibility of going along with the boys' insane plan, but Sheppard privately reveals he'll use the Dart to scoop everyone up and fly back to Atlantis. Only after this does McKay agree to modify the Dart so that Sheppard can fly it.

Meanwhile, Teyla and Ronon's enzyme dosage is increased, and soon their personalities are radically altered. But Sheppard maintains his plan. He'll force Ford to include all of his team in the strike force. Once they are culled, Sheppard will fly everyone home.

Ford has seen through his plan, and as insurance that he will not return to Atlantis with the Dart, McKay will remain behind. Also, the onboard D.H.D. will only dial the hive ship's planet and back.

Sheppard scoops up the group in a culling beam and travels through the Stargate, but as he approaches the hive ship the Dart initiates an autopilot. Inside he is barely able to release the cargo, but when he does the Dart deposits the group on the edge of a precipice within the ship. Three of Ford's men, including Jace, fall to their deaths.

The Dart parks itself in a landing bay. The canopy dissipates and Sheppard is greeted by two Wraith warriors. He disables them with his P-90, setting off an alarm in the ship. After a violent struggle everyone is confined into a single Wraith holding cell. Ford believes Sheppard deliberately set out to screw the mission, but the Colonel puts him in his place.

A Wraith commander arrives to escort the pilot of the Dart to another part of the vessel. Sheppard is taken away and placed on a pedestal in a vast room. When he turns around, he finds a female Wraith – the hive queen – staring him in the face. She wraps her mind around Sheppard's, forcing him to buckle to the floor into submission, and probes his thoughts.