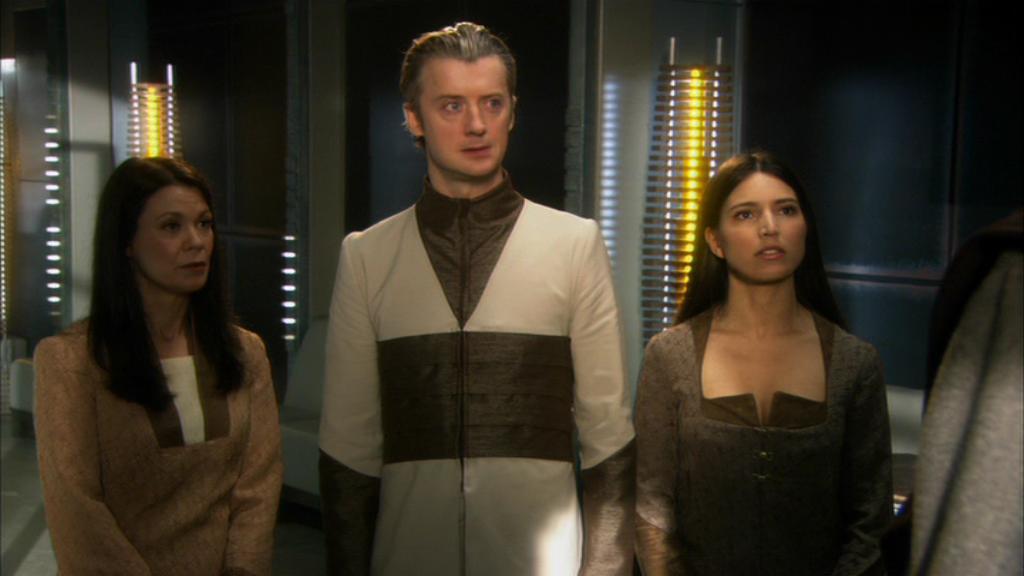 The evolutionary pinnacle of microscopic machines originally created by the Ancients to fight the Wraith. The Asuran race developed out of an Ancient experiment gone terribly wrong, a shining example of the Ancients' own underestimated ingenuity.

Desperate, exhausted, and greatly outnumbered, the Ancients resorted to using their technological superiority go give them a needed advantage by creating the Asuran race. Initially the creatures were simple nanites programmed to destroy from within, causing a brain hemorrhage in any Wraith who came in contact with them. In the microscopic machines, the Ancients provided a base aggression that was even stronger than that of the Wraith. The technology allowed for organic assimilation and replication to increase their effectiveness. Soon the nanites grew in numbers, evolving at a rate that took their own creators by surprise.

The deadly nanites from where the Asuran race sprang. From "Progeny"

Eventually the molecular machines assembled to form more complex organisms, eventually evolving into an image akin to their creators. Despite this feat, the Ancients chose not to remove the aggression subroutines, hoping to still use the first Asurans as a weapon. Additionally, the Ancient scientists who developed them created directives that prevented the Asurans from removing the subroutine themselves, as well as preventing them from turning on their creators.

When the Ancients decided that their experiment had gone too far, that the Asurans could never be used effectively as a weapon, they decided to try and cover up their mistake. They dispatched countless Ancient warships to Asuras to level the cities and leave no trace of the race behind. They also ensured, either originally or by a program update, that the Asurans would never be able to find their way back to Atlantis.

Asurans communicate via powerful subspace frequencies, periodically updating their programming with "merges," where new information is exchanged. These merges can also allow a large number of Asurans to collectively rewrite the base code of a single individual, manipulating his or her core personality.

Niam shows how the Ancients came to destroy Asuras in force. From "Progeny"

The technological development of the civilization has thrived for so long that it now surpasses that of the Ancients during the height of their development on the material plane. They can create multiple Zero Point Modules with ease, ensuring a limitless power supply for themselves, and they have mastered hyperspace travel to make any civilization known to them within their grasp.

Because of their subspace link, as well as their uncanny ability to replicate, the Atlantis expedition theorizes that they have discovered the ultimate origin of the Replicator race. This would explain how block Replicators, when provided with the technology left behind on an Asgard world, would be able to create advanced versions of themselves in the form of humanoids. It would also explain why the Ancient repository of knowledge possesses a weapon capable of defeating them.

The only evidence of the Asuran race left behind was a small sample of the original nanites developed to destroy the Wraith (which broke containment during a Lantean flood and killed several Atlantis expedition members), as well as a single reference to Asuras' gate address in an Ancient outpost.

After the Asurans discovered that Atlantis still exists and is occupied by humans they set out to attack the city, only to be thwarted by John Sheppard's team. Under the leadership of the aggressive Oberoth the Asurans began to construct a fleet of warships, and Earth's attempt to destroy them with a preemptive first strike triggered a war. It ravaged the Pegasus Galaxy for the better part of a year, until an unlikely alliance of Atlantis, the Wraith, and the Travelers attacked Asuras and -- with help from a "friendly" Replicator created in Atlantis -- destroyed the planet and most of the species.

A small number of rogue Asurans survived on board a ship hidden nearby. This splinter group opposed Oberoth and his aggression toward Atlantis, seeking instead to discover the path to ascension. They would be led by a Replicator copy of Elizabeth Weir.

Progeny - Dr. Weir and her team encounter the Asuran people after following a stray gate address that appeared in an Ancient outpost database.
The Real World - The team learns that the Asuran Niam infected Elizabeth with nanites.
The Return, Part 1 - Revealed to be Replicators, the Asurans attack Atlantis and wipe out the Ancients who have taken up residence there.
The Return, Part 2 - The team takes back Atlantis from the Replicator invaders.
First Strike - Earth launches a preemptive attack on Asuras after intelligence reveals that they are building warships.
Lifeline - To save Atlantis the team visits Asuras to steal a Z.P.M., and with help from Dr. Weir, the Asurans can do nothing to stop them. The Replicators launch a war with the Wraith.
Reunion - A Replicator who has been captured by the Wraith is set free when a team from Atlantis attacks their research lab.
Be All My Sins Remember'd - McKay uses Lantean technology to create "Fran," a Replicator who is used to destroy Asuras and the entire Asuran race.
Ghost In the Machine - Believing all the Asurans are destroyed, the Atlantis crew are amazed to learn that some survived -- including one who claims to be Elizabeth Weir.