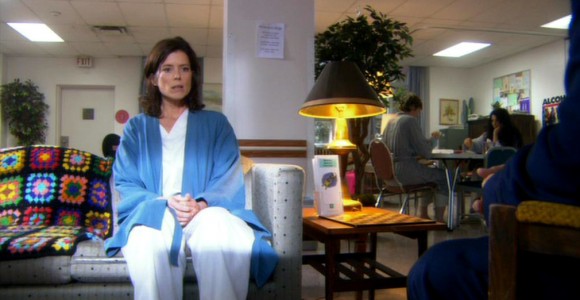 Elizabeth Weir wakes up in a mental institution, where she is told that the expedition to Atlantis and the Stargate are figments of her imagination.

Sitting in a psychiatric hospital outside Washington, D.C., Dr. Elizabeth Weir is shocked to be told that Atlantis is a figment of her profoundly stressed imagination. In fact, the last two years of her life as she remembers them never happened. Her psychiatrist, Dr. Adam Fletcher, informs her that a car accident which killed her fiance, Simon Wallace, caused post traumatic stress which recently surfaced. She has been suffering delusional psychosis triggered by the stress of negotiating a nuclear non-proliferation treaty.

Weir refuses to believe him. She demands to meet with Major General Jack O'Neill. He comes to the mental institution professing to have no idea what she is talking about. He assures her that there is no Stargate program, let alone him ever running it. As far as he understands it, there is no lost City of Atlantis (just a rock song he never liked). When Weir imagines his head flipping around on his shoulders, she is sufficiently upset to tell him to leave. She even gets violent trying to exit the sanitarium. The doctor medicates her into submission.

Fletcher wants Elizabeth to accept what has happened to her, but nightmares convince her that something more is afoot.

After several days in his care, group therapy, and a visit from Weir's own mother, she begins to believe that she has simply imagined running the Atlantis expedition. Though she previously flushed her medication down the toilet, she begins taking them, and in Fletcher's eyes doing much better. He allows her to return to her apartment in Washington, D.C., where she is met by her dog. In familiar surroundings, she meets again with O'Neill. She is ready to start teaching her old poli-sci class, but the General asks her to return to the negotiations which he she left hanging.

But back in the real world, in Atlantis, Elizabeth lays in the infirmary in a coma, under the care of Dr. Carson Beckett and the concerned watch of her friends. She has been infected by Replicator nanites in her encounter with the Asuran defector Niam ("Progeny"), and the microscopic, artificial creatures are replicating rapidly, using her body as raw materials. Soon she will die – or, worse, be transformed into a Replicator one cell at a time.

Lt. Colonel John Sheppard talks to Elizabeth from outside the isolation curtain, encouraging her to fight them. In her dream world, she begins to get the message and, convinced again that they are doing her more harm than good, stops taking her medications.

Soon her nightmares resurface, and she sees a shadowy, featureless figure through glass, in her sleep, and at the oddest moments. These images terrify her. She even hears a voice telling her to get back to Atlantis. Once again, she is returned to the mental hospital for treatments.

Dr. Beckett and Dr. Rodney McKay race to find a cure to the highly advanced, artificial infection. The problem is that, because the nanites have bonded with her own cells, eliminating the Replicators inside Weir with an electromagnetic pulse (as the team used effectively against nanites before ["Hot Zone"]) could leave her brain dead. Since the Ancients designed the Replicators to fight the Wraith, Beckett injects Wraith tissue into Weir's leg to draw as many nanites as possible away from her brain. McKay's EM pulse eliminates most – but not all – of the nanites. They only begin replicating again.

With that short reprieve, Weir hears John more clearly through her coma, telling her to fight. In her mind, the Replicators pull out the stops trying to intimidate her and frighten her. When she cooperated with the fantasy world they were showing her, they were able to spread more rapidly and voraciously.

Fleeing her captors, Weir finds herself running through the corridors of Stargate Command, inside Cheyenne Mountain. Sheppard appears, urging her to follow him – as in the real world John breaks the quarantine to enter the isolation area and connect physically with Elizabeth. Even General O'Neill appears to "save" her from Sheppard. But she braves even firing assault rifles to run after Sheppard. At the Stargate's event horizon, her psychiatrist appears to block her path, morphing into Niam himself. He tries one last time to impede her entry into the gate.

Bravely, Weir steps right through him and into the Stargate, saving herself and finding her way back to the real world. She wakes up to find her friends at her side, back in Atlantis.